'The Kalashnikov age': Remembering the man behind the AK-47 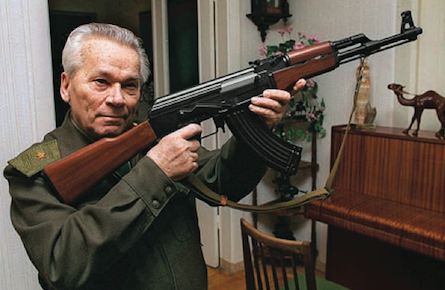 Gen. Mikhail Kalashnikov, holder of the Order of Lenin, has left the stage of history at age 94. He departs pursued by considerable odium, for he was the designer of the AK-47, the automatic weapon that has come to dominate the world’s small wars. In 1999, a disarmament expert, Michael Klare, declared that the preceding decade had seen the dawn of “the Kalashnikov age.” Some 70 million AK-47s and knock-offs thereof were then thought to be in circulation around the world, every last one of them simple to use, easy to repair and unbelievably resistant to climate and neglect.

In Africa, to use Klare’s words, “the adolescent male equipped with a Kalashnikov” essentially became the formula for a new weapon of mass destruction. Add grenade launchers to the recipe and you can create serious trouble for a fairly sophisticated state. Add surface-to-air missiles and you can defy a superpower.

Kalashnikov was confronted with the blood guilt for all this woe on many occasions. His answer was always the same: Blame the Germans. I’m a farm kid, Kalashnikov would tell his accusers. (He died in a hospital in Udmurtia, which is just as remote from the familiar, urbane parts of Russia as it sounds.) If not for Hitler and the Wehrmacht, the general would say, I would have happily kept fooling with tractors for the remainder of my days.

Instead, Kalashnikov was drafted; and because he was small, and handy, they made him a tank mechanic; and, before long, he was a tank commander; and then, not long after that, he was a wounded soldier listening to infantry comrades gripe about their crappy rifles. The rest was inspiration and hustle.

The AK-47 did not really go into serious production until 1956, by which time Hitler was no longer on anyone’s list of problems. Kalashnikov’s design was so successful, and exerted such powerful leverage on history, that it might be the only item with a known individual inventor that appears on any national flag (Mozambique’s). Yet if it is thought of as a device by which a Soviet soldier might kill an American one, it has been used for its purpose once, ever: in 1985, when an American intelligence officer sniffing around Russian armour in East Germany was spotted and slain by a grouchy sentry.

Kalashnikov did not split any atoms in designing the AK-47. He put existing components in a super-robust configuration, trading accuracy for reliability. Even a Communist factory could assemble an AK-47 without screwing it up. (Photo hobbyists prize old Soviet camera bodies for analogous reasons.) As a consequence, the AK has been copied everywhere human progress has gotten as far as stamping sheet metal. And it is not as though the little general got rich off royalties. Only after the fall of the Soviet Union was he able to monetize his fame a little, partly through ignominious moves such as flogging Kalashnikov-brand vodka.

This seems too obvious to need mentioning, but it is not the gun, even as an abstraction, that is the odious part of the “child soldiers plus AK-47” formula. (From the leve?e en masse to strategic aerial bombing to 9/11, intellectual progress in war-fighting is often just a matter of someone scratching off an unstated rule of civilized combat.) The secret of the AK-47 amounts to a tightly limited number of cheap parts and loose machining tolerances. It is out, and for good. I am not smart enough about firearms to tell how far some present-day “AK-47s” have strayed from Kalashnikov’s original vision, but I imagine it is pretty far.

I am just smart enough to read actual gun literature when I’m writing about guns (pro tip!), and the Gun Digest Book of the AK & SKS has a funny, instructive chapter on the history of the AK-47 in the U.S.A. Americans aren’t immune to the Kalashnikov’s counter-cultural charm. Their politicians tried to ban the AK-47 by outlawing the import of the “essential” part that made it an automatic weapon, the receiver. Of all the AK-47’s parts, observes author Patrick Sweeney, that one “is by far the easiest to fabricate.” Gun ranges were soon overrun with Kalashnikov hobbyists in Che T-shirts. So the government “wised up” and banned AK-47 barrels. American gunsmiths were fabricating those before the ink was dry on the law.

You can see where this story leads: to the verge of a decentralized, all-American cottage industry in AK-47 manufacture. “The purists will complain that the cosmetic details aren’t correct,” predicts Sweeney. “They’ll get over it,” he adds with undisguised glee, “for we’ll have AKs.”