From the archives: The lessons of Mandela

In his 1990 report, Allan Fotheringham witnesses history as a jailed martyr tastes freedom 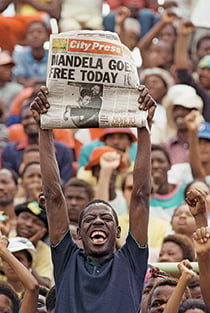 This report was first published in 1990 as Maclean’s correspondent Allan Fotheringham reported from Victor Verster Prison in South Africa.

So, we are standing around waiting outside the Victor Verster Prison. Waiting for Mandela. Waiting for Godot. This is amidst the lush vineyards of the Paarl country an hour outside Cape Town. Purple peaks rise above us. A restaurant called Le Paris is across the road. A helicopter whirrs overhead, revealing a TV cameraman who is busily shooting film of all the TV cameramen on the ground who are filming the helicopter. Nelson Mandela is more than an hour past his highly publicized release time, and we wonder what the problem is. A New York Times reporter muses about the processing ritual going on inside: “Mr. Mandela, you were issued three pairs of socks when you were admitted here 27 years ago. You are returning only two pairs of socks. Where is that other pair of socks, Mr. Mandela?”

We contemplate how much macrame must be piled up after 27 years. How many thousand Times of London crossword puzzles filled out? It’s daunting to think of what 27 years in prison—27 years in a South African prison—could do to a man, but the remarkable man/myth that is Mandela somehow survived it. He is trim and erect at 71 as he walks through the gate, he is smiling, his voice is clear and strong and authoritative. He beat the system.

Because of his patience and his strength, Mandela became a more powerful figure—not a lesser one—the longer he was in jail. The South Africans finally learned what the British were taught painfully long ago by Gandhi: the martyr in jail can become more influential than the government that jails him. Eventually, they have to release him, since the government’s legitimacy decreases and the martyr’s increases.

Nelson Mandela looked like a young Joe Louis when he went into prison (he used to be a good amateur boxer) and when he emerged, looked like George Armstrong, the old Maple Leaf. Mandela was born to the royalty of the Xhosa tribe. He was given the name Nelson by a white teacher who couldn’t wrap her tongue around his given name—Rolihlahla. Later, he became just a number: Prisoner 0221141011.

He opted out of a tribal marriage and, after university, articled with a Johannesburg law firm. He loves to tell the story of one of the firm’s typists, a white, embarrassed that a white client had seen her taking dictation from him, demanding, “Nelson, here’s a sixpence, please get me some shampoo.”

The young lawyer eventually turned from peaceful protest to armed struggle. Charged with treason in 1956, he was acquitted—five years later. He went underground as the “Black Pimpernel,” dodged around Africa, took sabotage training and slipped back and forth into South Africa, giving clandestine news conferences to reporters from phone booths. He was 40 when he married 24-year-old social worker Nomzamo Zaniewe Winifred Madikizela. In 31 years, they have spent just a few months together. Disguised as a chauffeur, he was arrested by police in 1962 and jailed for five years for leaving the country without a passport.

When security police swooped down on the African National Congress underground hideout in 1963, they found a fanciful guerrilla-warfare document. Mandela was brought from prison to stand trial for treason along with nine comrades. Defending himself, Mandela gave his now-famous “black man in a white man’s court” speech that lasted four hours. He never denied anything he had done, but explained in a moving address how he had progressed from Gandhi-like non-violence to violence because he did not feel bound by the laws of the country that would not allow him a vote in formulating those laws. Excerpts from the speech became a sensational long-playing record in London, now a collector’s item. The judge, because of his eloquence, backed off on the death penalty for treason and sentenced them all to life.

In prison, they were put to work smashing rocks and, on the first day, were ordered by guards to trot the one-mile on the double. Mandela said, “Let’s walk as slowly as possible.” They did, the guards could do nothing about it and when they arrived at the quarry, an officer was sent to speak to Mandela. That meant, to both sides, that they had already acknowledged his leadership.

One of the ANC leaders just released tells of how, in the early days in the crowded cells, the crickets at night used to drive them crazy and they would try to kill them. Mandela instead would take each cricket, cup it in his hands and release it through the window. He asked for Afrikaans poetry to read, so he could understand the minds of the architects of apartheid. Two of his children are in university in South Africa, and a daughter is taking a Ph.D. in anthropology at the University of Massachusetts. One of his favorite readings in prison was Ring magazine, the bible of boxing.

As the years have passed, the myth has grown. Practically every city in Britain has honoured him in some way. More than 100 artists from Harry Belafonte to Sting to Whoopi Goldberg honoured him with a massive concert in Wembley Stadium on his 70th birthday. A nuclear particle discovered at the University of Leeds was named the Mandela particle.

Nelson Mandela has outlasted five South African leaders. The present one, President F.W. (Frederik) de Klerk, says, “He is an elderly man, a dignified man, an interesting man.” That is the understatement of the decade. If he lives, and is not assassinated, he could be the next president—and not only through black votes.