The making of Turkey's strongman 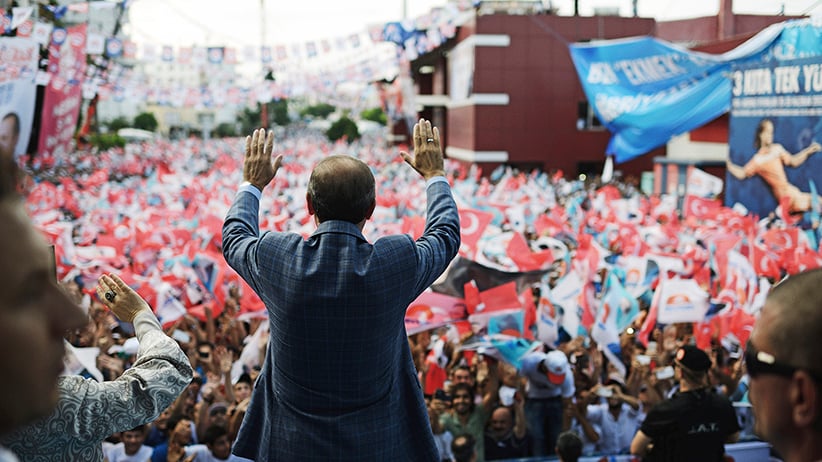 Recep Tayyip Erdogan started his campaign to become Turkish president in Samsun, the same port city where Mustafa Kemal Ataturk, the founder of modern Turkey, began the Turkish War of Independence nearly 100 years ago. Erdogan also adopted Ataturk’s slogan from that conflict, fought against the mostly Western victors of the Great War, to describe his own political quest. It was, he says, a “war of liberation.”

The comparisons are outlandish. Ataturk’s struggle was a bloody one; Erdogan’s was electoral. The men themselves share little in common. Ataturk was a secularist who believed in a strict separation of religion and politics. He abolished the caliphate and outlawed sharia courts. He admired much of European and Western culture in general. An American advised him on how to reform Turkish education. He liked to wear a Panama hat.

In his 11 years as prime minister, beginning in 2003, Erdogan chipped away at the secular foundations Ataturk built. Leading the Justice and Development Party, which has Islamist roots it has now abandoned, he confronted and bested Turkey’s military, which saw itself as the guardian of Ataturk’s legacy, bringing it firmly under civilian control. And rather than looking to Europe for inspiration, on the campaign trail Erdogan railed against “outside forces” supposedly trying to harm the nation.

The only thing that Erdogan might honestly share with Ataturk is ambition, a desire to leave his mark on Turkey and Turkey’s mark on the world. Barred from continuing his efforts do so as prime minster because of party-imposed term limits, Erdogan reached for the presidency. And on Sunday, he won a landslide victory, extending his hold on power. “We are closing the doors on one era and we are now taking our first step to a new phase,” he said in a victory speech. “We will face down whoever threatens our national security.”

The presidency has, until now, been a largely ceremonial position. This was the first time a Turkish president was directly elected, rather than chosen by parliament. But even before his election, Erdogan made it clear he intends to modify the president’s job description. “It makes sense for advanced countries to generally have a presidential system, or a semi-presidential system,” he told Turkish television station Kanal 24 last week. “We have to make a jump.”

Expanding the president’s role will require changes to Turkey’s constitution. This can be done without a referendum if the changes are backed by a strong majority in Turkey’s parliament, for which elections will take place next year. Officially, a Turkish president is supposed to be politically impartial. “But is this how Erdogan will behave? I have my doubts,” says Sinan Ulgen, a former Turkish diplomat and visiting scholar at the Carnegie Endowment for International Peace.

Erdogan became increasingly authoritarian over the course of his premiership, tolerating little dissent. Twitter and other social media were repeatedly blocked. He accused peaceful protesters of terrorism. He politicized state institutions. A street protest movement that was born out of opposition to plans to develop an urban park in Istanbul was crushed. Erdogan dismissed the demonstrators as “looters” and promised they would tremble with fear.

Media freedom was also curtailed. Critical journalists lost their jobs. Others learned to be supplicant. During the presidential campaign, Turkey’s state broadcaster gave disproportionate coverage to Erdogan over his rivals. Even the now limited powers of the president give Erdogan room to circumvent institutional checks on the government. Turkey’s constitutional court restrained Erdogan when he was prime minister. As president he will appoint the judges that sit on it.

Turkey’s drift toward autocracy under Erdogan matters beyond the country’s borders. It is a NATO member and is in accession talks to join the European Union. It was once seen as a bridge between Europe and the Middle East, a strong ally of the United States and a Muslim-majority state that was a friend to Israel.

Turkey’s international orientation shifted during Erdogan’s time as prime minister. Support for EU membership among Turks declined sharply, from 73 per cent in 2004 to 44 per cent last year. Turkey’s relationship with Israel began spiralling downward after the 2008-09 war in Gaza and has not recovered. Erdogan recently said Israel’s “barbarism” in Gaza “surpassed even Hitler’s.”

Marc Pierini, a former EU ambassador to Turkey, now also at the Carnegie Endowment for International Peace, expects this trend to continue. “What we’re going to have is the beginning of a new era. Turkey will be the uncomfortable bedfellow of its traditional Western partners,” he says. “An almighty presidency implies polarizing discourse. It implies keeping the rule of law rolled back, as it has been for the last few months, and of course, media restraint. All of this is not EU compatible.”

And yet Turkey remains a country that the West cannot sideline or avoid dealing with. It is a powerful regional player and one that is much calmer and more stable than its war-ravaged neighbours, Iraq and Syria. Any sort of Western action in either of those countries will be easier with Turkish co-operation.

Turkey’s border with Syria is of particular concern to America, Canada and European nations because of the number of Islamist jihadists—many from Western countries—that cross it to join the Islamic State, which now controls much of northeastern Syria and western Iraq. Ankara opposes Syrian dictator Bashar al-Assad but has not always been discerning about the sort of aspiring anti-Assad fighters it allows to transit Turkey on their way to fight in Syria’s devastating civil war. “The border with Syria wasn’t controlled for a long time,” says Pierini. “There has been a constant flow back and forth of jihadists. And despite Western complaints about it, Turkey hasn’t done anything.”

Turkey is becoming more active of late, says Pierini, noting the case of a French resident who was arrested in Turkey on his way to fight in Syria. Turkey is cracking down in part because of the risk Turkish jihadists in Syria may pose if they return. Pierini says some 1,000 Turks are now fighting with the Islamic State. “There are a lot of misgivings,” says Pierini, referring to the West’s approach to Turkey on issues pertaining to counterterrorism and regional security. “There will be co-operation with Turkey, but I would say ‘dining with a long spoon.’ ”

It is safe to assume Erdogan has little intention of vacating his position at the head of Turkey’s political dining table anytime soon. His campaign slogan includes the phrase “target 2023,” and the date features on his campaign posters. By then he will have been in power, as prime minister or president, for two decades. It will also mark the 100th anniversary of the founding of the Republic of Turkey—by Ataturk.