The many faces of a grinning young white man

Image of the week: Nick Sandmann in his MAGA hat—smiling at a Native American protester while flanked by braying classmates—seemed self-evidently hostile. But these days nothing is self-evident 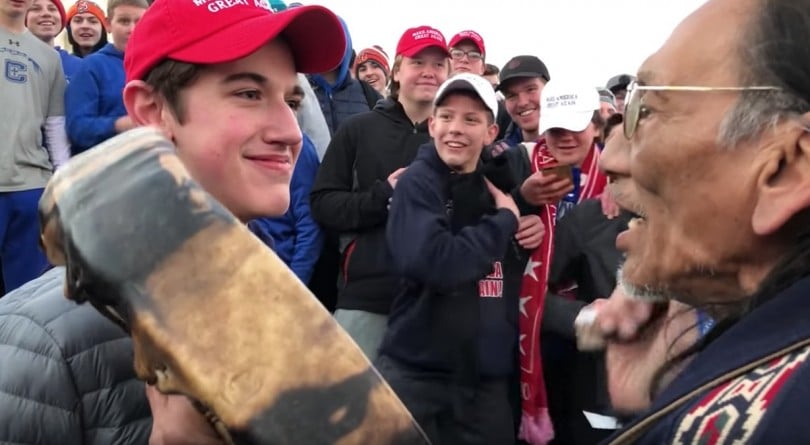 When people saw the first video, there was near-unanimous outrage: it showed a young white bro in a “Make America Great Again” hat seeming to smirk at a Native American protester, inches from the man’s face, his smug-looking grin proof of white privilege, his friends howling and laughing in the background. The boys were on a field trip to the Lincoln Memorial from Covington Catholic High School, a private school in Kentucky with a five-figure tuition fee. But then a second video surfaced that Judo flipped the whole thing: the Native American, a Vietnam veteran named Nathan Phillips, actually approaching the students, not vice versa, trying to defuse a heated moment between the boys and a group of African American protesters. “I didn’t feel that I could just stand there anymore and not do something,” Phillips later told CNN. “It looked like these young men were going to attack these guys. They were going to hurt them because they didn’t like the color of their skin.” The main kid, Nick Sandmann, announced to the world in a well-prepared PR statement he was in fact “startled and confused” by the confrontation—a claim belied by his grin, according to anyone who can read facial expressions. By then, more videos were popping up, each adding perspectives and crafting a reality that anyone could watch and nobody could agree on: left-wing critics doubled down on their charge that the boys and their hats were avatars of race-based intimidation; right-wingers defended the students as “symbols of Fake News,” as President Donald Trump wrote on Twitter. Eventually a third video appeared, shot moments before the central incident, wherein the same boys heckle a female passerby, their cries of “MAGA!” “Build the wall!” and—to some ears—”Slut!” audible before she turns to the camera, exhausted, and says, “I’m so tired already.” She’s not the only one.