The Middle East just lost its sharpest leader. What next?

Terry Glavin: Jalal Talabani held Iraq together and helped the Kurds thrive. His death comes at a moment when he's needed the most. 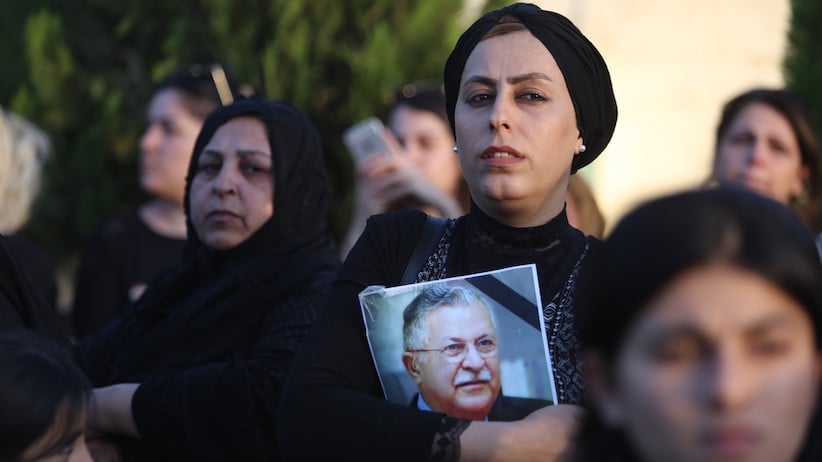 An Iraqi woman grieves as she holds a portrait of Jalal Talabani in front of the Kurdish Patriotic Union’s building in Sulaymaniyah, Iraq on Oct. 04, 2017. (Photo by Feriq Ferec/Anadolu Agency/Getty Images)

He was known to Kurds everywhere as “Mam Jalal,” Uncle Jalal. Pragmatic, portly and gregarious, fluent in Persian, Arabic, English and French, Jalal Talabani, the fierce Kurdish guerrilla leader who went on to become the first president of a united, post-war Iraq, died in a Berlin hospital on Tuesday, Oct. 3. He was 84.

Talabani’s death punctuates an exhilarating but precipitous episode in the century-long Kurdish freedom struggle. Only a few days before Talabani’s death, in a referendum carried out in defiance of Baghdad, Washington, Tehran and Ankara, Iraqi Kurds voted 92 per cent in favour of a bid to negotiate a clean break with Iraq and full independence for themselves. The result was greeted with jubilation by the stateless Kurds across Northern Iraq, Southwestern Iran, Northern Syria and Eastern Turkey, but with fury by almost everyone else.

Iran immediately rushed troops and missile launchers to its border with Iraqi Kurdistan. Syria’s Bashar Assad issued his own bloodthirsty denunciations. Turkey’s Recep Erdogan threatened a variety of punitive recriminations, including a shutdown of the Kurdistan Regional Government’s main source of revenue—a pipeline that moves 550,000 barrels oil a day through Turkey to markets in Europe. Baghdad closed Kurdish airspace, moved to seal the Kurdish region’s borders, slapped sanctions on Kurdish banks and ordered a halt to foreign currency transfers to the Kurdish region.

In the middle of all this, the Kurdish Regional Government was set to proceed with a full parliamentary and presidential election Nov. 1, but it is not at all clear whether a presidential ballot will be on the slates. The main parties are the Irbil-based Kurdistan Democratic Party (KDP), dominated by the Barzani clan, the Patriotic Union of Kurdistan (PUK), most closely associated with the Talabani clan of Sulaimaniya, and the Gorran Party (the Movement for Change). The deadline for the parties to nominate presidential candidates fell on the day of Jalal Talabani’s death, but only the Gorran Party, the second largest party in the Kurdish regional parliament, had named a candidate: Mohammad Tofiq Rahim.

The Talabanis’ PUK declined to name a candidate, arguing for a postponement of the presidential elections until next year, owing to the ongoing crisis in the region: the war to dismember the Islamic State (ISIS) is in its final throes; there are 400,000 Kurds waiting to be returned to villages that had been overrun by ISIS; and the Kurdish Regional Government is hosting more than a million people displaced from Southern Iraq and Syria.

The KDP hasn’t named a presidential candidate either. The KDP’s Masoud Barzani, who spearheaded the controversial referendum, has insisted that he wouldn’t run again. His term has been extended twice by parliament, and the constitution forbids him a third term.

Barzani has served as the Iraqi Kurdish president since 2005. That was the year the Iraqi parliament turned to Jalal Talabani for leadership, even though Talabani had been a lifelong Kurdish separatist and the PUK’s militant patriarch. Only two years after the Anglo-American overthrow of Saddam Hussein, Iraq’s Sunni and Shia Arabs elected Talabani president of Iraq. Although the Iraqi presidency is a largely ceremonial post, Talabani helped hold Iraq together until 2014, when failing health prompted him to resign, and ISIS began to seize great swathes of territory, eventually controlling close to a third of the country.

Talabani’s immense talents in diplomacy and political triangulation are now in woefully short supply throughout the Greater Middle East, which is engulfed in upheavals of a kind unseen since the collapse of the Ottoman Empire a century ago. The Kurds are the region’s most fervent democrats and the sturdiest and most effective allies in the NATO campaign against ISIS. The Kurds are also more favorably disposed to western democracies, far more than Turkey, which is nominally a NATO member. The Kurds are also uniquely friendly to Israel—the only country in the region that backed Barzani’s referendum and joins the Kurds in their hopes for a sovereign state.

While Canada folded under pressure from the Trump White House to oppose Barzani’s referendum, as did the effectively leaderless European Union, Canadian Forces personnel are expected to continue their training and assistance role with the Kurdish Peshmerga (“those who face death”) in the fight against ISIS. Canadian troops and other Canadian specialists are planning on staying long after ISIS is finally routed from its last strongholds.

Canada’s expertise in clearing landmines will be put to use throughout Iraqi Kurdistan—ISIS has booby-trapped dozens of the Kurdish villages it occupied, and mine-clearing operations may take years to complete. But the human landscape is just as scarred and treacherous. Whatever comes of Barzani’s referendum, the Kurds’ dream of building a sovereign enclave to defend themselves against the persecutions of their powerful neighbours will not be soon dimmed.

That was the dream that sustained Jalal Talabani his entire life, even though he was willing to give the idea of Kurdish semi-autonomy within a united Iraq every ounce of his efforts. Born in the Kurdish village of Kelkan in 1933, Talabani was active in the Kurdish underground by the time he was 13. Five years later he was already a senior member of the KDP, which at the time was led by Mustafa Barzani, Masoud Barzani’s father.

Talabani’s personal evolution was markedly different than that of most Third World revolutionaries of his generation. When he helped found the Patriotic Union of Kurdistan in the 1970s he was a typical Leninist, but over time, he became a devoted democratic socialist. He was capable of striking necessary bargains with his sworn enemies—for a time, with Khomeinist Iran, and for a brief period, even with Saddam Hussein, the mass murderer of at least 50,000 Kurds. His most enduring friendships, however, were with Britain’s Tony Blair and U.S. President George Bush—the arch villains of the Euro-American “Left.”

It was the Anglo-American no-fly zone that protected the Kurds following the First Gulf War in the early 1990s, and the overthrow of Saddam Hussein in 2003 secured for the Iraqi Kurds the most peaceful, democratic and prosperous period in Kurdish history. That’s not something the Kurds are likely to forget any time soon. Kurds have a long memory.

Ankara has waged an on-again, off-again war against Turkey’s Kurds for nearly four decades, and since 2015 matters have gone from bad to worse under the increasingly tyrannical Erdogan. Iran’s Kurds were ruthlessly oppressed during the period of the Shah, and since the Khomeinist takeover in 1979, Iran’s Kurds have been subjected to particularly brutal oppression. In Baathist Syria, the Kurds have enjoyed a modicum of freedom and autonomy since 2011, mostly because Bashar al-Assad has been otherwise occupied slaughtering Syria’s Sunnis. But Syria’s Kurds have also had to exert most of their energies defending themselves against the depredations of ISIS.

It is only Iraqi Kurdistan that has flourished, in spite of everything. Jalal Talabani is owed much credit for that. Now he’s gone, and nobody knows what’s coming next.