The mood from (the very far back) of the National Mall 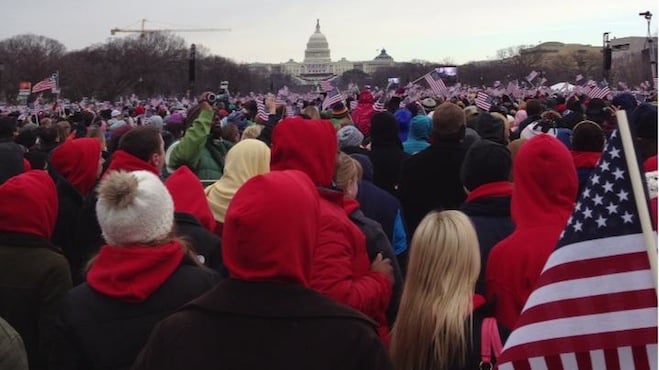 In 2009, Washington D.C. prepared for hundreds of thousands of people to descend on the nation’s capital to celebrate Obama’s first inauguration. When over two million arrived, pouring into every corner of the National Mall, the mood was often described as “electric”. After an unprecedented campaign, hope and change had arrived in the United States, and people were holding their breath to see what this new president could do. 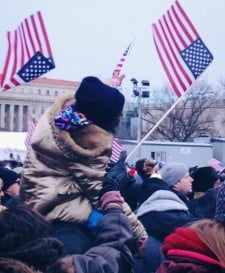 In 2013, the mood has changed. At the far back of Washington’s National Mall, well beyond the ticketed area closest to the Capitol building, the faithful still crowded. Families and church groups shared hot coffee and granola bars; senior citizens, overwhelmingly African-American, leaned on shaky walkers; and college students belted out Bruce Springsteen songs to pass the time. Some of the very youngest Obama supporters curled up on blankets and napped, while one five-year old from Maryland sat on his father’s shoulders and informed us all that he wanted to ignore the TVs and watch “real life”. When Obama came forward to take the oath, that same boy, apparently tired of watching specks of people in the distance, yelled: “It’s happening! The inauguration is almost over!”

The mood was not electric, but it was happy. While President Obama has not irrevocably changed the divisive nature of American politics, he has lead the country through four tumultuous years, and he has successfully passed legislation–and moved forward the national conversation–on healthcare, gay marriage, gun control and climate change. For these reasons, many Americans were happy to brave the crowds and the cold of D.C to welcome him back; not as a symbol of hope and change, not as a super-human national healer, but as a man they are proud to call their president.

FILED UNDER: Barack Obama mood from the capitol