The most dangerous thing Donald Trump has done yet

Adnan R. Khan on why Trump's moves against a nuclear-armed, highly unstable Pakistan are a bigger threat than Iran or North Korea 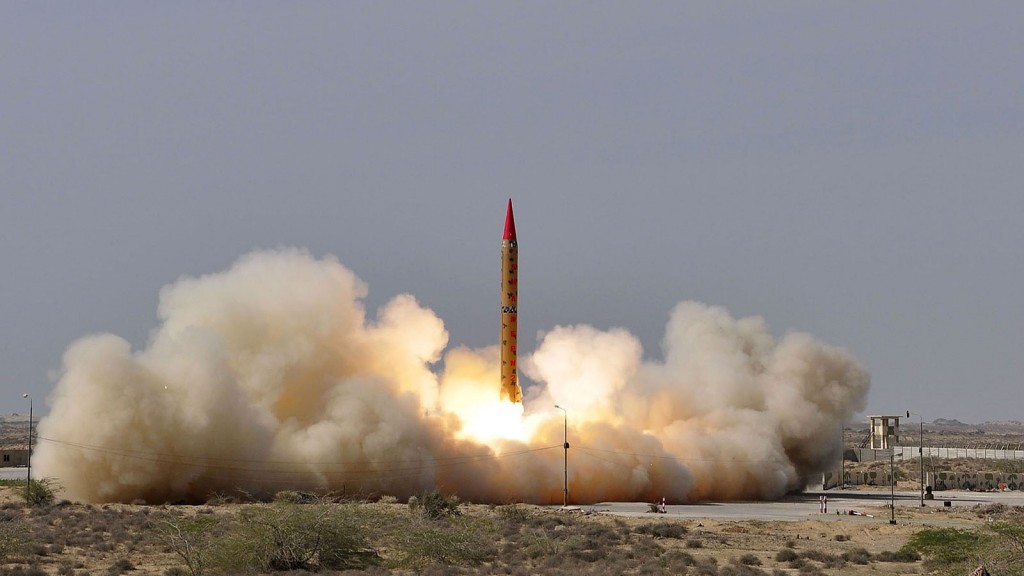 We’ve gotten used to Donald Trump saying things that, under normal circumstances, would cause a panic. Whether it’s daring North Korean dictator Kim Jong-un to press his nuclear button or threatening to cancel the nuclear deal with Iran, the U.S. president’s often erratic, and seemingly idle, threats have become so commonplace that they come and go with world barely batting an eyelid.

But on occasion, he says something truly dangerous. On the first day of the new year, Trump lobbed his latest foreign policy grenade, tweeting: “The United States has foolishly given Pakistan more than 33 billion dollars in aid over the last 15 years, and they have given us nothing but lies & deceit. They give safe haven to the terrorists we hunt in Afghanistan, with little help. No more!”

Unlike past Twitter rants, however, this one was followed up by actual policy changes. On Jan. 4, the State Department announced it would be freezing most military aid to Pakistan. Former president Barack Obama used the same tactic in 2011 and again in 2016. It didn’t work.

What’s more concerning are the threats coming out of the White House of isolating Pakistan further by cutting off the support it receives from international institutions like the International Monetary Fund, and possibly even listing it as a state sponsor of terrorism.

Those moves would have disastrous effects. There’s no doubt that Pakistan’s military has played double games—vowing to fight terrorist groups on its soil while protecting those it deems a strategic asset—for years. But there’s also little doubt that Pakistan, over the long term, represents a much more dangerous threat to the world than either Iran or North Korea.

Iran is a special case. As ruthless and self-interested as the clerical regime and its Revolutionary Guard thugs are, they have reigned over a society that is both educated and proud of its intellectual pedigree. The Iranians—at the risk of committing a hasty generalization—are a sophisticated bunch who know when they are being bamboozled. As one long-time observer of the country told me recently, in the face of a young, increasingly disenfranchised population, “It seems unlikely the regime will survive over the long term.”

And Iran doesn’t have nuclear weapons.

North Korea does, but it is under the thumb of an absolute dictator. Regardless of what some alarmists may want you to believe, Kim Jong-un is not a madman. His threats and grandstanding demonstrate a rational mind at work—cold and calculated, clearly—but with a functioning logic. He will push the rhetoric to the extreme only then to hold out an olive branch, as he did recently with his overtures to South Korea.

Conversely, as unhinged as Donald Trump is, he is not the master of U.S. foreign policy. His tweets are more distraction than development. It is his cabinet, filled with military generals, that makes the real decisions and those generals are well aware of the consequences of war with North Korea.

Pakistan is an entirely different beast. Not only is its population deeply fractured and to varying degrees at odds with the state, but it is not uniformly governed. The tribal areas in its northwest operate under an anachronistic legal system implemented by British colonialists, and the writ of the central government holds little sway. Its most prosperous province, Punjab, is the one region that exhibits any semblance of democratic norms but Sindh, to the south, remains a bastion of feudal overlordship while provincial leaders in Khyber-Pakhtoonkhwa in the north rely on radical Islamists to legitimize their rule.

Meanwhile, the army exercises near total control over foreign policy but must defer to local governments on domestic issues, often resorting to playing political parties off one another to maintain its institutional dominance.

In short, Pakistan, unlike North Korea and Iran, is perpetually on the edge of collapse. And it has nuclear weapons.

We need a re-think about our established views on Pakistan. The old thinking that neatly divides the country between the military and the civilian government, the one self-interested and cynically playing games with its neighbours, the other utterly corrupt and inept, no longer accurately describes Pakistan.

The Pakistani political scene, as fractious as it is, has made some progress toward democratization. Corruption and a fear of religious conservatives have rendered its leaders incapable of making the kinds of reforms Pakistan desperately needs. But with a growing middle class and access to decent private education, there is hope for a generational change in the not too distant future.

The military, meanwhile, has not completely abandoned its old ways, but at least since 2007 it has found itself increasingly in the crosshairs of the radical jihadists of its own making. It has tried to confront them while leaving what it believes are assets—the Haqqani Network, Afghan Taliban and the Lashkar-e-Taiba—alone.

But Pakistan’s militant groups have become so intertwined that the reality is dawning on the generals that nurturing one group feeds the whole. There is no longer such a clean divide between good and bad jihadists.

“These days, the military is less obsessed with supporting radical groups than it is of making sure the entire jihadist project doesn’t come crashing down around it,” one Pakistani diplomat told me last year.

Indeed, the Pakistani military has watched its careful grooming of militant groups devolve into an unmanageable farrago of radicals that share resources and fighters. The Haqqanis have become integrated into the Afghan Taliban leadership; the Pakistani Taliban share fighters and resources with the Haqqanis; the Lashkar-e-Taiba is increasingly extending its jihad internationally and making in-roads with al-Qaeda; ISIS has a foothold in the country.

I know both Afghans and Indians who are no doubt rubbing their hands with glee over the prospect of Pakistan getting its just deserts, but before they get too carried away, consider this: It will not do either of their countries any good if the Pakistani state collapses. Chaos will flow east and west and consume the region.

That’s not to say we should just let Pakistan do as it pleases. Its military is culpable for the war in Afghanistan. Its cynical role as puppet master in Pakistani politics has stunted the development of Pakistan’s democratic institutions. But Trump’s hardline approach will not change its behaviour. In fact it will likely further insulate the generals against outside criticism and make them more desperate and prone to adventurism.

The last time the U.S. tried to isolate Pakistan, after it conducted its first nuclear test in 1998, it led to a military coup and brought India and Pakistan closer to nuclear war than they have ever been since.

A Pakistan in isolation is a recipe for disaster. The Pakistani state has never stood on its own. Throughout its seven-decade history, it has relied on foreign powers, primarily the U.S. and international institutions like the IMF, to keep it afloat. And its new best friend, China, is not reliable.

Without this external support, Pakistan’s economy would almost certainly collapse. Its regions, fractured along ethnic lines, would metastasize into separatist movements, a fear that has dogged the Pakistanis since independence. Pakistan would disintegrate.

The best-case scenario for a Pakistan in isolation is military dictatorship, which would only increase the tensions with both India and Afghanistan. The worst-case scenario is total collapse. And for a nuclear-armed nation, that is unimaginable.