The new faces of Afghan women

How a once-invisible generation, born under Taliban rule, is yanking Afghanistan into the 21st century 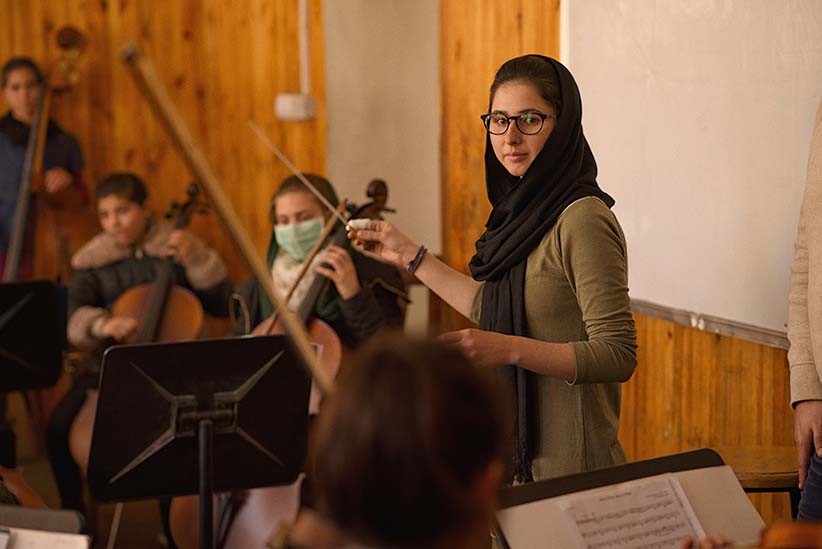 Negin Khpolwak (19) is the conductor of Afghanistan’s first all female orchestra, photographer here during a rehearsal at the Afghan National Institute of Music, in the capital, Kabul. (Photograph by Andrew Quilty)

In a rehearsal hall in downtown Kabul, 19-year-old Negin Khpolwak stands in front of the all-women symphony orchestra, her baton poised and with the nod of her head, she makes history as she begins her first performance as a conductor.

On the outskirts of town, on the Omid-e-Sabz foothills that roll out of snow capped mountains, Zahra Naarin, 24, and Zakia Mohammadi, 21, are careening down the hillside, shoulders hunched over handlebars, victory in their eyes as they cycle over the rocky terrain.

For Negin the sound of music drowns out the threat of the Taliban that claims girls can’t play music. For Zahra and Zakia the thrill of racing rather than the menace of the extremists empowers them to take on a sport that has been forbidden for girls.

Conductors, extreme cyclists, even rappers and paragliders; these are the new faces of Afghan women. They’re chasing careers and going to university. They’re thumbing their noses at those who would drag their country backwards. Despite the worrisome insurgency and the gloomy economy, the young people of Afghanistan who make up the majority of the population—67 per cent are under the age of 30—are yanking this primitive place into the 21st century.

In fact, on International Women’s Day last month, dozens of young women tweeted their dreams to the Network of Afghan Women. Said rapper Sonita Alizadeh, “To the women of my beloved country: believe in yourselves. You are strong.” Filmmaker Sahraa Karimi said, “We will become a force for progress in our country and no one can deny our power.” And this from journalist Zarghuna Kargar: “Afghan women are no longer silent. They are a force for progress. From now on, if we have sons, we will teach them to stand up for girls, and if we have daughters, we will make sure they know their value and remember the struggles of the women before them.”

This is the generation that was made invisible when they were born into the first iteration of life under the Taliban: their mothers couldn’t work; their older sisters couldn’t go to school. The windows of their houses had to be painted black so that no one could see the women and girls inside. Not anymore.

Negin lives in an orphanage and thinks she won the life lottery when she was picked to join the Afghanistan National Institute of Music. The rehearsal hall where she’s practising for the concert two days hence feels like the happiest place in Afghanistan. Almost all the musicians are street kids and orphans: one of them has a muddy smudge on her cheek, another says she used to sell plastic bags on the street. A third is blowing bubble gum while she plays the drums. 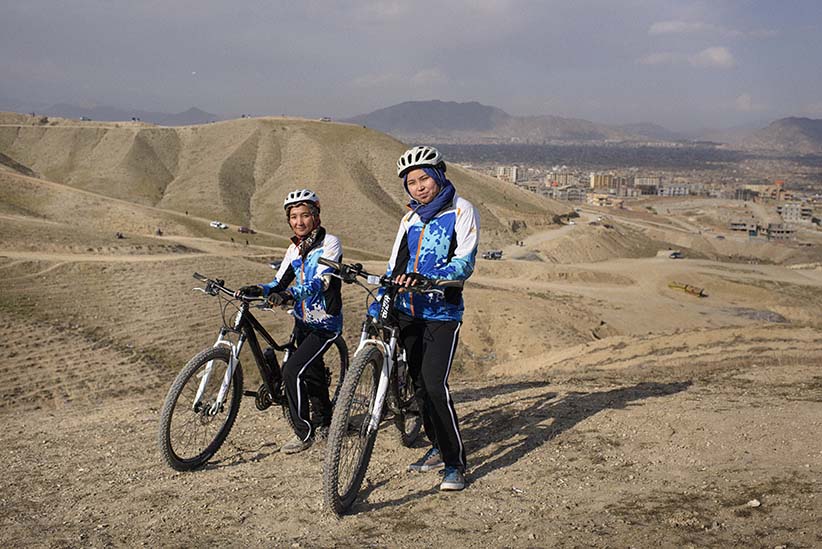 L to R. Zakia Mohammadi (21) and Zahra Naarin (24) with their mountain bikes on a hilly range on the outskirts of Kabul. The two girls travelled from Bamiyan, in central Afghanistan, to Kabul to be interviewed and photographed. (Photograph by Andrew Quilty)

The school is six years old, the brainchild of Ahmed Sarmast, who convinced the ministry of education as well as major donors and seven embassies, including Canada’s, to fund his musical initiative. He picks the students by giving them tests that show musical ability: clapping sequences, singing in different keys, listening and identifying sounds.

Negin says with an air of disbelief, “I am so lucky; mothers and fathers don’t want girls to play music because of our culture, but my father approves.” In fact, he sent her to an orphanage in Kabul because there was no school for her in Kunar, near Jalalabad, where the family lives.

She sees her family twice a year and shares a room with 20 other girls at the orphanage. She first chose the lute-like rubab, a traditional Afghan instrument, and then switched to the similar sarod and finally to the piano. But today she’s concentrating on conducting and is making history in the process. The violin and viola teacher Jennifer Moberg, who is from Rochester, N.Y., says, “Negin is a natural, she has that thing that bosses, leaders, managers and conductors have.”

Says Sarmast, “I believe in every child in this country. They are leading a cultural revolution and showing what Afghans are capable of. This is the way to say no to extremism and radicalism.”

They haven’t escaped the notice of the Taliban. Their concert in 2014 was attacked by a suicide bomber. The musicians weren’t hurt but a man in the audience died and the blast destroyed Sarmast’s hearing in one ear. He speaks defiantly. “They said I was the man who corrupts the nation. I’m the man replacing violence with the beauty of music.”

Their first public performance was at the Canadian Embassy, on an invitation from ambassador Deborah Lyons, who afterwards invited several of the musicians to come for lunch and meet the first lady of Afghanistan and other dignitaries.

Today the rehearsal room is brimming with confidence. The maestro, Camilo Jauregui, who came here from Colombia, is teaching them the protocol for the beginning of the concert. “The first violin tunes her instrument then points to the first clarinet.” Now Negin steps onto the stage and shakes hands with the first violinist and turns to the audience to bow. A few giggle at the solemnity. They are high school kids, after all, but this is a lesson in nation building.

The progress is not to say the status of women and girls in Afghanistan has overcome its oppressive past. The public lynching of a woman called Farkhunda in downtown Kabul while a dozen police officers stood by and watched; the stoning death of Rokhshana in Ghor province; and the story of Reza Gul, whose husband cut off her nose in remote Faryab province—all made international headlines. But they also ratcheted up public discussion in Afghanistan among women who are fed up with men who beat their wives and fathers who rape daughters and illiterate mullahs who marry off 14-year-old girls to 50-year-old men. Women’s rights activists have claimed for a long time, “If you can’t talk about it, you can’t change it.” Now the women are talking.

Zahra and Zakia both come from Bamiyan, the province that gained notoriety when the Taliban destroyed the two Buddha statues that had stood watch over this spiritual place for 2,000 years. Zahra’s story reads like a tale from Charles Dickens. “I was 40 days old when my mother died and two years old when my father died.” The youngest of three daughters, she was raised by her eldest sister, who put her to work as a carpet weaver at age six.

She begged her sister to let her go to school and eventually struck a deal with her. If she completed a certain number of lines of carpet weaving a day, she could go to school. “My sister also decided to grow me up like a boy because we had no brothers in the family and she thought if I was like a boy I would be courageous and be able to stand on my own feet. She cut my hair short and dressed me in boys’ clothes.” It worked in her favour. She won all the school’s running races and got away with riding a bike all over the village. She became the self-confident woman she is today.

She’d been a refugee with her sisters in Iran and then lived in Herat with her eldest sister before moving on her own at age 18 to Bamiyan, where she took a part time job and enrolled in the university to study archaeology. She was riding her bike in the centre of Bamiyan one day and met Zakia, who flagged her down. Zakia said she also used to cycle when she was a refugee in Iran, but because of the conservative nature of Bamiyan she didn’t dare take her bike on the road.

Like the fortuitous meeting of a pair of rebels, they became fast friends and started cycling together. “We like to go fast, too much fast,” laughs Zahra. Soon enough they attracted a few other girls and established a training track where they could prepare for what they hoped would be competitions with other cyclists. They also attracted the attention of the mullahs who called them sinners and infidels and warned them to get off the bikes and act like girls. The rebuke only served to heighten the resolve the girls had to be champions.

That was 2014. Now they have a team of eight girls racing down mountainsides in the spring, summer and fall and doing what they call extreme skiing in the winter months. Last year Zakia saw someone paragliding on television and knew immediately she wanted to try it. She found a teacher in Kabul and convinced him to come to Bamiyan and show her how it’s done. The first time she flew, she says, “I had a mixture of fear and excitement. I felt like a bird freed from its cage.”

They wear their confidence like trophies when they share the news that they’ve been invited by the Giant cycling club in the U.S. to come to the States and train. Their goal is to ride in the Tour de France, a race that women aren’t allowed to enter. But being forbidden has never stopped these two.

Now Zahra lives in Kabul. When Zakia visits, they meet on Omid-e-Sabz and come pitching down the hillside, one passing the other as they change gears and pedal harder. They’re grinning when they pass the onlookers who can hardly believe what they’re witnessing: girls cycling, just like the boys.