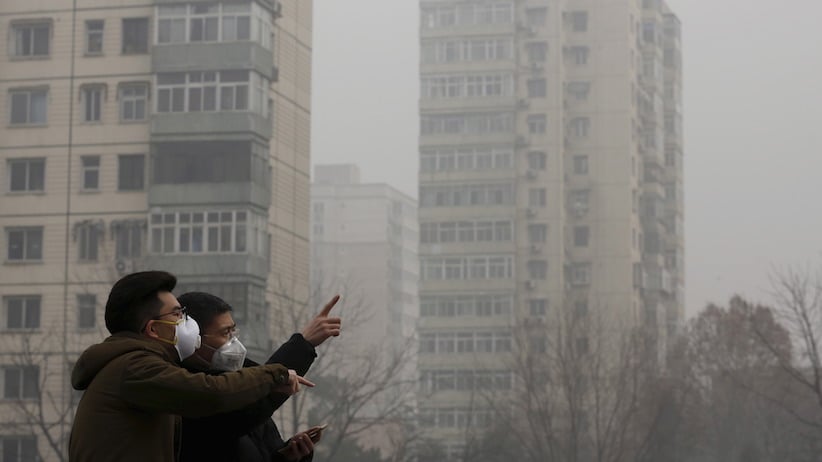 On Dec. 18, Jacqui Li glanced up at Beijing’s unusually clear sky. Such beautiful conditions had seemed all but impossible just over a week before, when the Chinese capital endured its first-ever “red alert” pollution warning, issued because heavy smog was expected to smother the city for three days. The alert all but shut the city down: there were stiff traffic restrictions, the suspension of factory operations, closure of public schools and more.

Thumbing through her phone, Li was dismayed to learn that the sunny days were once again coming to an abrupt end. There was news of another red alert, forecast for Dec. 19 to 22. Li was not only upset that the pollution would return—leaving her wheezing—but about how disruptive the alert would be for families like hers.

Li, who lives in the city’s centre and works as an IT consultant across town, said the first red alert was announced on Dec. 7, a Monday, at 6 p.m., meaning the school closures and traffic restrictions took effect at 7 a.m. the next morning. Those stipulations lingered until Dec. 10. Red alerts are issued when the city’s pollutants are forecasted to exceed a level of 200 on the air quality index (AQI) and last for three days or more—even though the smog had all but dissipated by day three of the first alert.

The second red alert was issued on Dec. 18, a Friday, giving parents more time to make arrangements until the restrictions were lifted at midnight on Tuesday, after which the city’s forecasters predicted much of the smog would be whisked away by a cold front. “We’ll know by Monday morning if the weather makes a joke of the forecasting system,” Li said. Indeed, the smog proved to be lower than expected.

The government’s recent red alerts have left many residents feeling more cynical than safe. On Christmas Day, the smog hit an all-time high (485 on the AQI) but no alert was issued. This week air pollution reportedly hit 20 times the recommended safe level (529) and again no red alert. During the last red alert, Zhai Yi Ning was most impacted by the “odds/evens” traffic stipulation, in which half the city’s privately owned cars are barred from the road, based on their licence plate numbers, during the red alert. On the “evens” days she is unable to drive the 20-km commute from her home in Beijing’s outlying Tongzhou district to her office, where she and her colleagues arrange photo shoots for— ironically enough— car expos and dealerships. When she can’t drive, Zhai takes the subway, transfers to a bus, then walks 20 minutes to her office. A 20-minute stroll on Beijing’s most heavily polluted days is enough to leave a bitter, grubby taste in the back of one’s throat. On her walks Zhai said she feels very unhappy, “like there’s no relief.”

Despite the hassles and failures, the red alert system represents a major breakthrough, say environmental and health groups. Dr Bernhard Schwartländer, a representative for the World Health Organization (WHO) in China, told Maclean’s that the issuing of the red alerts “means, first and foremost, that the Beijing authorities are taking air quality, and related health issues, very seriously.” Its efforts have also included massive subsidies and incentives placed on electric cars, and the banning of steel and coal refining in the capital—though Beijing all too frequently becomes shrouded in smog from refineries in neighbouring regions.

On smoggy days, Li said she keeps her daughter indoors, shuts the windows and turns on her air purifier to its maximum setting. Other parents strap masks onto their children before venturing outdoors, while some high-priced international schools have state-of-the-art air purification systems. Li said even the most sophisticated measures ultimately fall short. “Red alerts and forecasts can’t settle this. What’s important is a solution for the future.”

As her daughter sat in her lap, the young mother told Maclean’s, in English: “People don’t just want to receive an alert that keeps them from going to school or work, it’s definitely not enough—” She paused, as her daughter fiddled impatiently with her mother’s hair. Li asked her, in Mandarin: “Do you know what smog is, sweetie? When there’s pollution, do you remember what colour the sky is? Is it still blue?” At that last question, Li’s daughter confidently shook her head in response.