The Pax Americana is officially over

U.S. influence is at a new low and will keep falling under Trump. What comes next is going to be ugly. 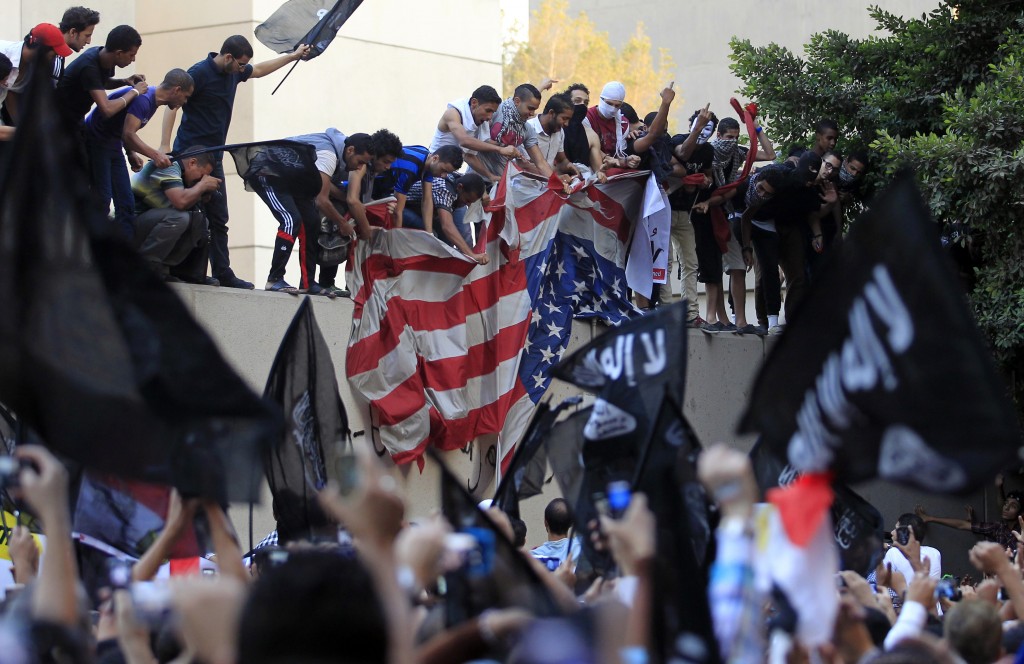 Protesters destroy an American flag pulled down from the U.S. embassy in Cairo on September 11, 2012 over what they said was a film being produced in the United States that insulted Prophet Mohammad. (Mohamed Abd El Ghany/Reuters)

I watched a video this morning. It was filmed in Damascus. A father held his two daughters on his lap. The girls were aged 7 and 9, but they looked younger and smaller. The children are stiff, and uncomfortable, staring past the camera. Their mother, off screen, tells them to be patient as they squirm a little while their father talks gently to them.

The man explains he is sending them off to be suicide bombers, to kill the infidels. The mother hugs them, the father offers parting words of comfort: “You won’t be scared, because you’re going to God, isn’t that right?” Then the girls walk out the door, like they are heading to school, a confused expression on their face and looking tiny in their winter coats.

According to news reports, a few hours later the youngest one approached a policeman. She was lost and asked to use the washroom. After he let her in, her bomb was triggered remotely, killing her and injuring three others. There’s another video of the aftermath. The ceramic in the washroom is sooty and broken. The remains of the girl have been collected in a very small bag—one more death to add to the 400,000 others who have lost their lives during the Syrian civil war.

After the end of the Cold War, the world became considerably less dangerous, moderately less bloody, and much more predictable. Without the superpower rivalries, nuclear tensions eased and the doomsday clock was rolled back. The number of armed conflicts fell by half and the rate of battle deaths dropped even lower. And although American foreign policy lumbered from one misadventure to another, Washington presided over an imperfect peace, and you mostly just needed to watch the White House to get a sense of how events were likely to unfold overseas.

But this New World Order has slowly eroded over the last decade. The Afghan and Iraq misadventures strained American alliances, and sowed chaos across the Middle East, central Asia and northern Africa. Russia began to expand its sphere of influence into the former Soviet republics, and beyond. The rise of China, Brazil and India gave Washington less room to manoeuvre. Coupled with President Barack Obama’s instinct to talk more, do less, and always underreact, America’s influence began to wane, even if the chaos left in its wake continued to wax.

Not coincidentally, the long-term trends toward a more peaceful and less violent world have been reversed over the last five years. There are now more refugees globally than at any time in history. And while the number of wars and combat deaths remains relatively low within the context of the last century, violent conflicts increased by over 60 per cent during that time.

It’s unlikely that the Syrian civil war could have happened during the Cold War. Neither the Soviet Union nor the United States would have benefited from it spiralling out of control like this and destabilizing the entire region. Earlier in the post-Cold War era, after Rwanda and during the heady days of “Mission Accomplished,” Washington would not have hesitated to send a cruise missile down Assad’s chimney, or to march in ground troops to stamp out ISIS. But this is a new era now, more multipolar and less predictable than any time since the 1930s.

It is clear that this new age is not an American one. In fact, 2016 arguably marked the lowest point in American influence since the Second World War. The last several weeks have seen it drop even further. Obama reported that during one of his conversations with his successor, he asked the president-elect to refrain from weighing in on international issues because “there can only be one President at a time.” Nonetheless, Trump continues to throw zingers at whatever international issue catches his fancy. Foreign powers like China, unable to decide if they should take Trump’s muddled and juvenile foreign policy spitballs “seriously or literally,” are choosing to simply ignore the United States entirely.

Consider the Syrian summit this week in Moscow. The three countries at the table? Russia, Iran and Turkey. U.S. Secretary of State John Kerry wasn’t invited, and the absence was not missed. The three parties were still able to agree on a joint approach that included a ceasefire and peace talks.

For Turkish President Recep Tayyip Erdoğan, the agreement supports his goal of creating a buffer zone in northern Syria so it can relocate the large number of refugees currently in camps on the Turkish side of the border. It also advances Turkey’s efforts to build a new alliance with Moscow as Ankara shifts away from Europe. And for Russian President Vladimir Putin, the deal props up their ally in Damascus. This will ensure another year of bloodshed, as Syrian President Bashar al-Assad claws back Aleppo and other cities still held by the rebels.

The Pax Americana is over. It is still too soon to know what comes next. But, sadly, it is more likely be a world where a father sends his young daughters off with bombs strapped to their chest, than the sane, humane, predictable world we have longed for.