Image of the Week: Campus officers in uniform—most of them people of colour—stood at attention. Some saw it as a moment of healing; others as an insult. 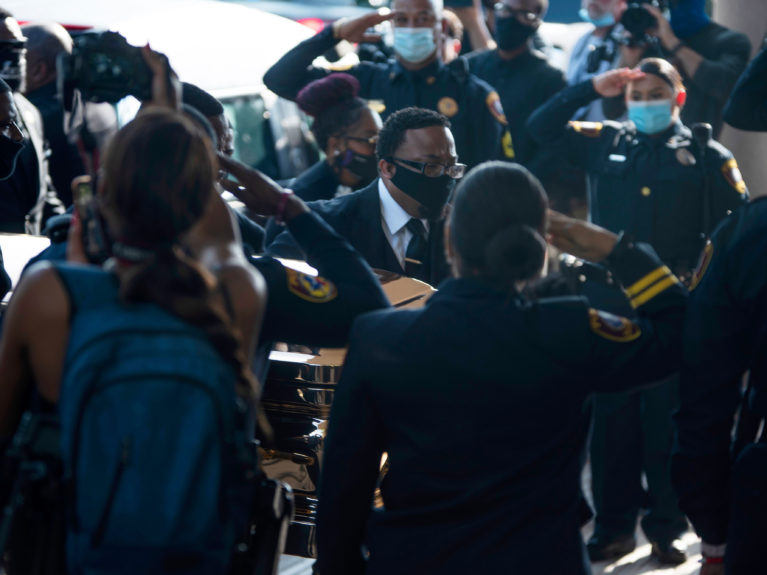 George Floyd, whose death at the knee of police officer Derek Chauvin prompted a global anti-racism protest movement, was laid to rest following a private funeral in Houston this week. Family members, activists and politicians showed up. But so did some cops. A small crew of campus police officers from Texas Southern University, mostly people of colour, saluted Floyd’s casket as it passed them by. Progressive protesters, whose goals have focused on defunding police institutions across Canada and the U.S., would be understandably shocked at the sight of officers standing so prominently along the path of the funeral procession. So why do it? Were they offering security services? Was it orchestrated as a picture meant to heal divides, to manifest the words of Art Acevedo, Houston’s chief of police, when he acknowledged the power of the Black Lives Matter movement? The campus police declined to comment to Maclean’s, and one wonders how much consideration they gave to the other side of the optics. Ultimately, we might chalk the moment up to some sympathetic men and women— who happen to be officers at a university that’s offered a full scholarship to Floyd’s six-year-old daughter—paying their respects to a tragic figure whose death ruptured a nation.