The Philippines has a bigger trash problem than Canada

Matt Gurney: Canada should take back its waste. But the angry rhetoric coming from the volatile Duterte is masking a more serious local problem. 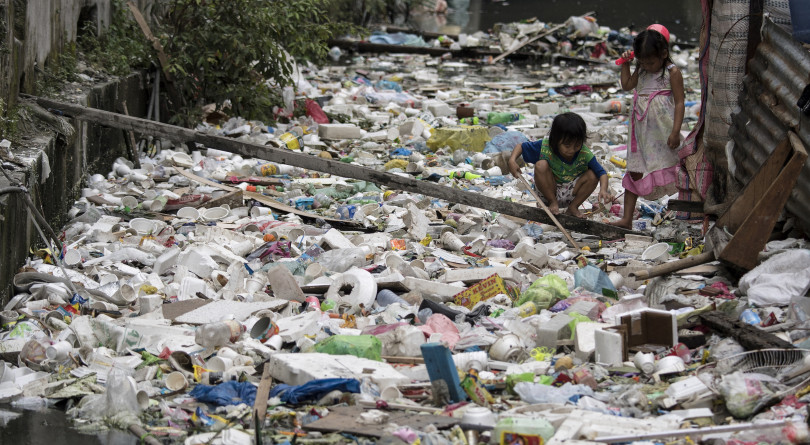 Children play on a garbage-filled waterway in Manila on Jan. 17, 2018 (NOEL CELIS/AFP/Getty Images)

These questions may have occurred to you if you’ve been following the war of words between Canada and the Pacific archipelago nation. More than a hundred containers of Canadian household waste were offloaded in a Filipino port facility in 2013 and 2014. The Filipinos are getting awfully mad about this, and their volatile president, Rodrigo Duterte, has even threatened war if Canada doesn’t take the trash back. Setting aside the fact that that’s a war Canada could probably actually win, the entire affair is bizarre. How did the trash even get there?

For years, Canada, and many other countries, have exported trash—well, in theory, recyclables—to China. Chinese workers sort the trash into what’s usable and what’s not; the latter gets burned and the former turned into new objects, many of which are then exported back. Some recyclable materials are purchased and used domestically, of course, but tonnes of it—literally—have been shipped to China.

But China has become increasingly frustrated at the high level of contamination in the items being shipped to it. Lazy sorting by all of us routinely means materials that can’t be recycled get mixed in with the products that can be. This imposes added costs and delays and erodes the business case for the entire venture. China recently effectively slammed the door on further imports of plastics, leaving exporting nations, including Canada, looking for alternatives.

This is a big deal. China’s previous willingness to accept so much refuse has stifled the development of a domestic capacity for processing recyclable goods. Municipalities in North America could pat themselves on the back for having a blue bin program without having to worry much about what to do with everything that ends up in said bins. Ship it to China! Even if it ends up getting incinerated there, that is a problem that is very much out of sight and out of mind.

In the case of our waste in the Philippines, though, something seems to have gone awry. The paper trail for the waste was bogus—faked—and a local official was charged with corruption for allowing the containers to be offloaded. Local authorities there processed some of it, but most of the containers remain as they were. Canada, under pressure from Filipino authorities and Canadian environmentalists, has said it will return them here for incineration, assuming the Philippines hasn’t invaded Vancouver Island in the meantime.

But there’s an interesting wrinkle to all of this—though Canada should obviously be responsible and take back the waste (or at least arrange for it to be dealt with) there’s method to Duterte’s madness. The Philippines has massive trash problems of its own. Since China stopped accepting plastics, though, the country has been used as a dumping ground for waste from places like South Korea and Australia. The government is furious, and picking a loud, boisterous fight with Canada is no doubt part of its strategy to get the dumping to stop.

But it’s also an opportunity for local officials to perhaps deflect some hostility onto convenient, distant foreigners. The Philippines is drowning in garbage, much of it of its own making.

It’s not a new problem. The country is a major contributor to plastic pollution in the ocean, the world’s third-worst offender. While some of that plastic may be swept away to become a more generically global problem, most of it stays close to home. It’s already overwhelming local fisheries and coastal areas, which are becoming inundated with trash.

Though some of the problem can perhaps be laid at the feet of the country’s difficult geography—it’s hard to efficiently provide services to 100 million people spread across more than 7,000 islands—trash is a major problem even in the biggest cities. Manila, the capital and home to 13 million people, struggles to keep up with its daily trash output of an estimated 9,200 tons, only 85 per cent of which is collected (the rest just … blows away). Its dumps are meticulously worked over by scavengers, an activity so rampant the government tries to regulate it. The city’s three dumps will be filled entirely in the near future; the least full is expected to be at capacity by 2037. And then what?

No one knows. There’s not a lot of time to find answers. This is not a failure unique to the Philippines, of course, but it’s particularly acute there—it doesn’t have nearly the space Canada does to establish and manage new landfills.

But it all puts a fresh spin on the angry rhetoric aimed at Canada by Manila. We absolutely should take back our waste. That’s what a responsible country would do. But it’s okay to roll your eyes when the rhetoric seems a bit over the top. Blaming Canada is a lot easier than coming up with answers to your own domestic problems. Perhaps instead of threatening war, it should be asking for help.