The Philippines is no stranger to tragedy

News cycles come and go. We’re so inundated with natural disasters overseas: tsunamis wiping out hundreds of thousands of people in Indonesia and beyond, earthquakes devastating Japan, and now, typhoon Haiyan. Everyone has heard the latest statistics of the Philippines’ most recent disaster, from wind speeds to numbers of people perished to the exponentially greater numbers of people rendered homeless, to the 10 million citizens whose lives have been seriously upended. I suspect the litany of statistics keeps most of us in North America at some remove.

It’s almost as though we’re strangely inoculated, numb to the incalculable suffering. The public self-destruction of Toronto Mayor Rob Ford, the avarice of certain senators, the shifting narrative of what Prime Minister Stephen Harper knew or didn’t know, let’s be real here: There’s a disquieting human element to these various scandals we can all relate to.

But how can we comprehend 10,000 people simply being wiped off the face of the Earth? For this to happen, there has to be some human connection. Certainly, for the 10 million Filipinos working abroad, there’s a soul-destroying connection. My own connection to the disaster can be summed up in a few emails.

In September, my Asian promoter Mike sent a note asking if I wanted to do a corporate show in Manila on Nov. 15. Had this concert gone through, I would have spent the lion’s share of November in the Philippines, producing and writing a “duets” CD with the country’s top singers, as well as doing a dozen or so shows. Certainly, I would have ended up in the province of Cebu, which has sustained 80 to 90 per cent damage. This trip fell through; record deals and concert tours come, and frequently vanish, as quickly as the wind in this part of the world.

Late Sunday, Nov. 10: With President Benigno Aquino III hours away from declaring a state of national calamity, three days after typhoon Haiyan roared across the central Philippines, I emailed Mike in Manila, anxious to know how he was. He constantly travels the country and I couldn’t be sure he was alive. On Monday morning, I received this reply: All is well here. Thanks for your concern. Hit hard down south in Leyte/Tacloban. The city airport is flattened. And then, to my astonishment: Looks like I have at least 2-3 shows for Feb so far. The last thing on my mind was a Valentine’s touring schedule.

An hour later, Mike wrote again, his earlier sanguine tone giving way to anger: This personally hits all of us. Cass [a woman who sang backup for me on my tour of Asia last June] sings any and all gigs to support her baby and her mom. Her home province was hit hard. As of yet, Cass does not know their status. No communication. It’s a bigger story than the storm when a country exports its brightest and most talented to every other country. Who’s left to manage?

12:30 p.m. Monday, Toronto: I phone one of my musician friends, Vic, worried that he hadn’t returned my email. “Everything’s fine here,” he said. “How about Cebu?” I asked. “It’s hard to know what’s really going on. But I think it’s bad.” (This turned out to be an understatement.) After reassuring me that his family was okay, he asked, “Are you going to fly to Macau to watch Manny Pacquiao fight? It may be his last fight. If you get an extra ticket, could I come too?”

He was only half-joking. The Philippines is no stranger to tragedy and unspeakable poverty, and there’s an irrepressible life-must-go-on spirit. I first saw this in Manny, the greatest boxer to come out of the country. Living on the streets as a child, he took up boxing to put food in his mouth. As we sat in his $1,700-a-night suite in New York’s St. Regis hotel, he came close to weeping when he discussed his country’s poverty. Since meeting him, I’ve toured the Philippines four times. My friends warned me of violence, Islamic terrorist groups, even beheadings and kidnappings. Instead, I saw a country threaded together by a love of family, an insatiable appetite for music and, most of all, resilience.

How long will it take places like Tacloban to be brought back to life? More important, how long will it take the Philippines and the West to understand that the problems run much deeper than the next typhoon or earthquake? The Philippines is a country blessed with such unbound spirit, and a heart bigger than all the tragedies it continues to endure. But right now, it needs all the assistance it can possibly receive. 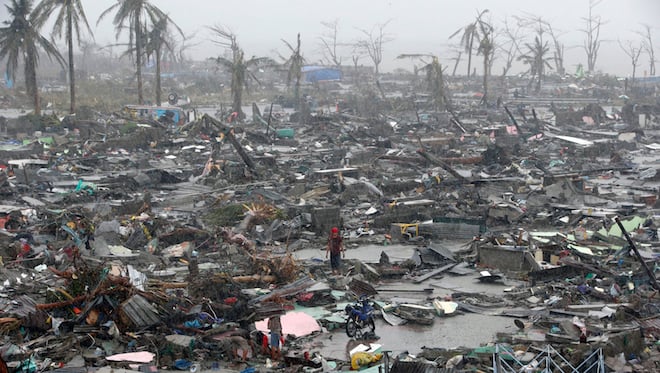 Typhoon Haiyan in the Philippines

Survivors stand among debris and ruins of houses destroyed after typhoon Haiyan battered Tacloban city in central Philippines on Nov. 10, 2013. Haiyan, one of the most powerful storms ever recorded killed at least 10,000 people in the central Philippines province of Leyte, a senior police official said on Sunday, with coastal towns and the regional capital devastated by huge waves. Super typhoon Haiyan destroyed about 70 to 80 percent of the area in its path as it tore through the province on Friday, said chief superintendent Elmer Soria, a regional police director. (Erik De Castro/Reuters)