The photographer behind the shot that's captivating the world 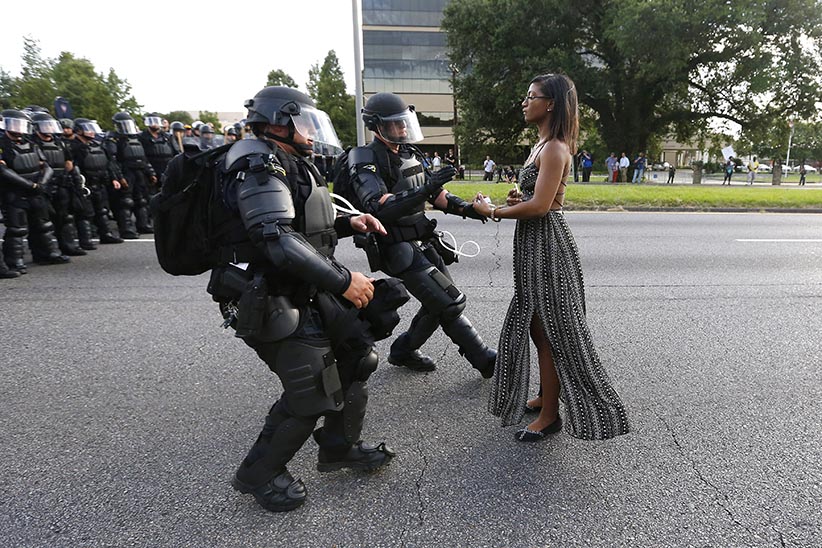 A demonstrator protesting the shooting death of Alton Sterling is detained by law enforcement near the headquarters of the Baton Rouge Police Department in Baton Rouge, Louisiana, U.S. July 9, 2016. (Jonathan Bachman/Reuters)

Ieshia Evans, a nurse from Brooklyn, was one of 102 people arrested in Baton Rouge, La., during Saturday’s protests over police brutality and the death of Alton Sterling. Jonathan Bachman’s photograph of her, moments before she was arrested, has since careened around the world. Some are already heralding the viral photo as an iconic moment that will be remembered for years to come, a vision of Evans’s serenity in the face of heavily armed officers. Maclean’s spoke to Bachman, a freelance photographer who was covering the Baton Rouge protests for Reuters, about that photo, being linked to history, and whether he thinks the shot was truly iconic.

Q: What do you think about the reaction to your photo so far?

It’s kind of overwhelming. I got back from Baton Rouge really late last night and caught a few hours of sleep. I kind of just woke up to a million emails.

Q: What did you see while you were in Baton Rouge?

What I saw were a lot of peaceful demonstrations. I was covering it for three days and all I saw were people being really respectful, really peaceful. I heard later that there were some violent altercations between police and protesters with things being thrown, but all I saw were two water bottles being thrown the entire time I was there.

Q:  What was it like in the moments leading up to the photo of the woman in the flowing dress? What were you doing?

A group of demonstrators were blocking Airline Highway. Law enforcement was called. They had come out in full riot gear—understandably, because of what had happened in Dallas two nights before. The officers were trying to push people off the road and they arrested maybe three to five people while they were doing that. So I was focusing off to the side where that was happening when I heard a voice behind me say: “She’s going to get arrested,” so I turned around and I saw her standing there in the middle of the road. And, I mean, she didn’t say a word. I didn’t speak to her then and I haven’t spoken to her since but it sort of looked like she was making her stand and saying: “You’re going to have to come and get me.”

Q: I wanted to ask you about the angle. The Associated Press also captured the moment but in that photograph you can’t really see the faces. How did you choose your position, what were you thinking?

To be honest, there were about 10 journalists behind me, television people mostly, and I wanted to get a low-angle so I wouldn’t be blocking them. I like low shots generally because I do a lot of sports photography. In sports, if you get low, you can capture the expression on player’s faces and the positioning of their bodies relative to each other. I wasn’t thinking about that at the time, though—it all happened really fast. I just sort of went low because it felt right.

Q: What happened in the moment after your photograph? Did she walk back peacefully? Was she manhandled?

They did not manhandle her. They didn’t take her to the ground. They just put handcuffs on her and took her away and she went with them. This photo really represents the peaceful demonstrations that have been going on. There are photos where you do see anger in some of the demonstrators but she was really peaceful, really calm, even with the officers coming at her. Even when they were taking her away, she looked incredibly dignified.

Q: There’s one other photo of yours that I wanted to ask about: In it, a police officer appears to be kneeling on a black man, and all you can see is the man’s face. What was happening there?

That was another thing where you just turned and saw it. The man was walking in between the protesters and the police and it actually looked like he was trying to keep the protesters back. He kept talking to the police as he was going back and forth, and I guess he must have said something they felt crossed a line and they just kind of grabbed him and threw him on the ground. 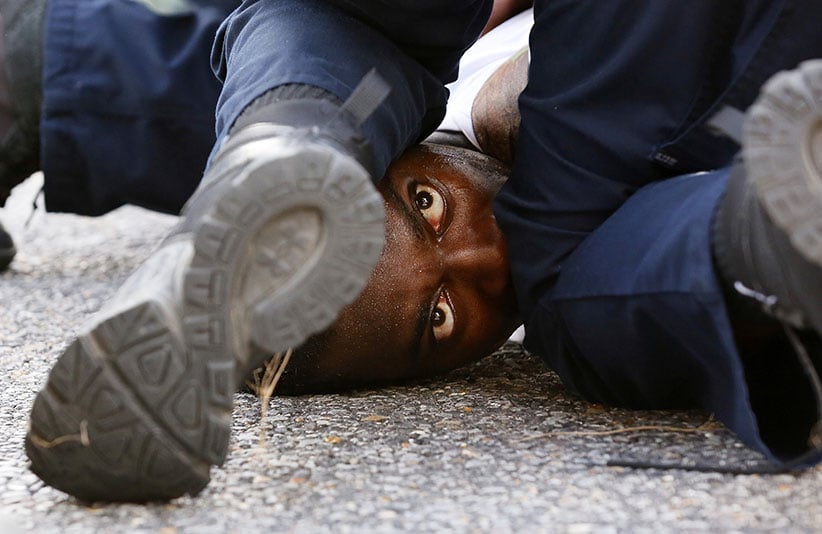 A man protesting the shooting death of Alton Sterling is detained by law enforcement near the headquarters of the Baton Rouge Police Department in Baton Rouge, Louisiana, U.S. July 9, 2016. (Jonathan Bachman/Reuters)

I don’t know. It’s hard to compare. To be honest, this was the first protest I ever covered. Everything is still so fresh so it’s kind of hard to rank it.

Q: I know you haven’t had a chance to look at the reactions but one of the most common ones is a comparison to the Tiananmen Square photo, of the man standing in front of the tank. What do you think of that?

Oh wow. I don’t know. I mean, people were dying at Tiananmen as part of the protest before that man stood in front of the tank. And people have died in Baton Rouge, too, of course, but the police officers weren’t firing into the crowd or anything like that which was happening at Tiananmen. And Tiananmen is a really iconic photograph…

Q: People are calling yours an iconic photo.

Oh wow. I really don’t know how to respond to that. I was there on assignment and this is what happened in front of me and I took the picture. I thought to myself that this is important because it does represent the peaceful protests that have been going on… but iconic? I wouldn’t say that.

Q: Do you know where your next assignment is?

I’m a freelancer, so I’m actually shooting a corporate event next.