'The Poetry of the Taliban' stirs controversy in Britain and beyond

A new anthology is both depressing and revelatory 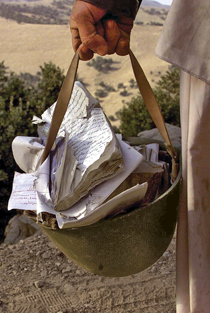 The U.K. release of Poetry of the Taliban this month has generated that rarest of media phenomena, a genuine poetry scandal. Richard Kemp, former commander of British forces in Afghanistan, blasted the collection: “What we need to remember is that these are fascist, murdering thugs who suppress women and kill people without mercy if they do not agree with them.” He went on to accuse the publishers of “being taken in by a lot of self-justifying propaganda.” The editors defended the universality of the experiences described in the collection and compared their book to the recently published Heroes: 100 Poems from the New Generation of War Poets. Both sides believe the poetry in the Taliban anthology will inevitably create sympathy for the enemy; the commander fears the sympathy, the poetry editors desire it. But the most shocking emotion the book inspires isn’t fellow feeling with the butchers of Afghanistan; it is delight. The pleasure of Poetry of the Taliban is its most upsetting feature.

As in many medieval societies, poetry is the essential means of expression in Taliban culture. When Mullah Mohammad Omar seized control of Afghanistan in 1996, he banned all music. The radios blared ballads instead. The Pashto poetic tradition is ancient even if its current material is predator drones and corrupt NGOs. As a poet identified only as “Zakir” says in “War Talk,” “The history of epics is not lost, reopen it!” The ghazal, an ancient Persian poetic form, is a favourite genre, and so we are confronted with the reality that the most rigid ideologues on the planet overwhelmingly choose an aesthetic of extreme lyrical ambiguity to express themselves. Every line is shot through with as many levels of meaning as possible.

Such poetry is profoundly revealing of the psychology of our enemy. Culled from cellphones, websites and cassettes, The Poetry of the Taliban bears little, if any, relation to official al-Qaeda “literature” with its idiotic, dull, unreadably boring dogmatism. There is politics in this collection but little ideology, little talk even of Islam. The verse burns with immediacy of reality. It’s full of alternately witty and grotesque bragging: The reason we always fold our moustaches upwards / Is because we break the necks of our enemies. Or, The cries of 41 countries reach the sky / As their coffins leave our land to every location. There are heartbreaking elegies for wedding parties that coalition forces have bombed. There are curses against George W. Bush and Hamid Karzai. But the language, more than the ideas, is the source of intoxication. The proximity of political poetry next to traditional love poetry and pastorals feels perfectly natural. These are people descanting on what they know. Sometimes it’s a rocket-propelled grenade. Sometimes it’s a patch of lush grass.

To my mind, “The Waiting Bullet” by Nawa Jan Baheer is one of the best war poems to emerge from the war in Afghanistan. It’s a very simple description of a “yellow boy” preparing to leave his house in the morning. With everything he does, every simple gesture, the poem builds to the inevitable end, the fate of the child who will step outside the door and be killed, a fate everyone in the house knows is coming. The proximity of the quotidian with the cruel is a recurring theme of the collection, as in Khepulwaak’s “On Eid,” about the holiday marking the end of Ramadan: At your Christmas, Bagram is alit and bright / On my Eid, even the rays of the sun are dead / Suddenly at midnight, your bombs bring the light / In our houses, even the oil lamps are turned off.

Throughout the collection, the invading armies—a temporally indistinguishable mass of Mongols, English, Soviets and Americans—are forces of mechanistic brutality ruining the glories of the Afghan countryside, the black mountains, the green valleys, the birds and the flowers. None of the verse in The Poetry of the Taliban made me even the slightest iota more sympathetic to their cause but it did make me wonder how we ever thought we could win there: how can you defeat an enemy who believes he’s fighting for the existence of flowers?

At least one senior American military observer has suggested a war of “counterpoetry,” which would have sounded insane to me before reading this collection but now seems both reasonable and completely impossible. What does it matter if we control the cities and the battlefields, so long as they control the narrative? The narrative is all they need to win. And their story is in the hands of brilliant, often anonymous storytellers.

The publication of this anthology is as depressing as it is revelatory. The Poetry of the Taliban is a celebration of indestructible despair, of unending destruction and resurgent beauty. It is as harrowing a portrait of Afghanistan as any piece of reporting I have read. The poet known only as Kamal says it best: The world today is better than yesterday / Tomorrow will be better than today / Alas, Afghans don’t know how to go forward / They are slipping backwards into dust.