The Polish Embassy in Ottawa responds to Jan Grabowski 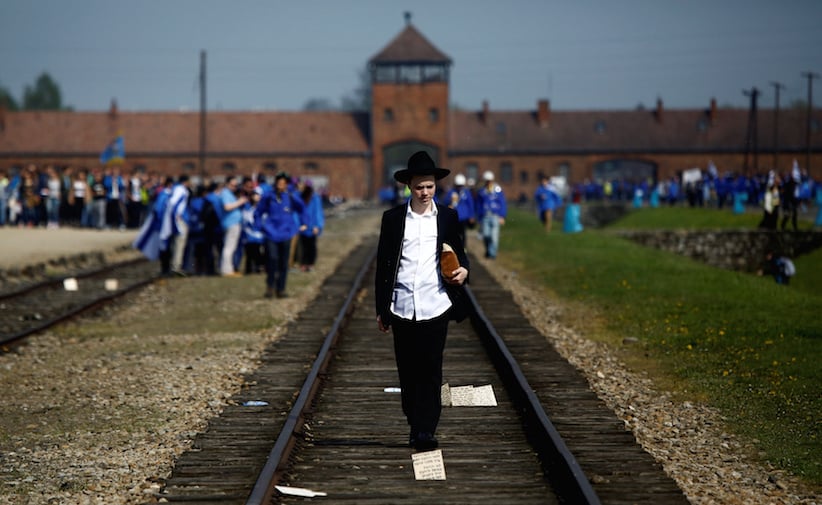 A man walks on the railway tracks in the former Nazi death camp of Auschwitz-Birkenau in May 2016. REUTERS/Kacper Pempel

Last week, Jan Grabowski, a professor of history at the University of Ottawa, author and Holocaust researcher, wrote an article for macleans.ca on changes to Polish legislation regarding research on the Holocaust in that country. This is a response from the Embassy of the Republic of Poland in Ottawa. Beneath that response is a rebuttal from Prof. Grabowski.

The article “The danger in Poland’s frontal attack on its Holocaust history” by professor Jan Grabowski published on your website on Sept. 20 contains a list of strong, but often groundless opinions and accusations toward Poland.

Mr. Grabowski is worried that after the introduction of new legislation, “historians who argue that certain segments of Polish society were complicit in the extermination of their Jewish neighbours in the Second World War will now think twice before voicing their opinion.” Yet his article is not even suggesting that perhaps not all Poles committed crimes but unjustly attributes the fate of Jews in German-occupied Poland to the Polish state and Polish nation. It contains a shocking reference to the case of Armenian genocide together with a suggestion that the Polish government wants to deny responsibility for the “most difficult questions of the country’s past.” Using such expressions as “Poland’s complicity with the Nazis” or “Polish blue police” (units formed by occupying Nazi Germany, made up of collaborators or those who were forced by occupying forces to perform whatever roles they were told) the article gives a false impression that Poland was the country behind the crimes of elusive and stateless “Nazis.”

In reality, there was no free Poland during the Second World War, and the Holocaust was the murder by Nazi Germany of six million Jews. Poland, unlike many countries, was never an ally of Nazi Germany and never had a collaborative regime. Polish citizens constitute the largest national group within the Righteous Among the Nations (6,620 of individuals), even though out of the entire German-occupied Europe it was only in Poland that the German military murdered any Polish citizen caught helping Jews, along with the family members. The vast majority of Poles upheld human values.

Sadly, there were also villainous acts. The Polish Underground State strongly opposed those crimes, trying to punish traitors and informers immediately. The first note of the genocide in Auschwitz was prepared by Polish officer Witold Pilecki, who volunteered to the camp, collected intelligence and organized resistance there. The Polish government in exile informed Western allies about German camps and appealed to stop the Holocaust. To no avail.

The new legislation mentioned by Mr. Grabowski is a draft of an amendment to an existing Polish law that has been in force since 1998, protecting our collective memory against defective codes of memory, against those who would try to deny the truth about the Nazis, Soviets and all other crimes, no matter if committed on Poles or any other nation. The amendment would add to the list of offenders those who publicly and contrary to the facts hold the Polish state or the Polish nation responsible or co-responsible for the crimes committed by the Third Reich or any other crime against peace, humanity as well as war crimes, with the exception of researchers, artists and those doing so involuntarily. It is by no means meant to dissuade anyone from exploring facts involving Polish individuals during the Second World War. There are no obstacles in Poland to conducting research or publishing its outcomes.

Finally, Holocaust denial is a crime in Polish law, subject to a fine or restriction of liberty.

I was not surprised to see the letter of Mr. Lukasz Weremiuk, the chargé d ’affairs of the Polish embassy in Ottawa, who decided to voice his strong objections to my note, published recently in Maclean’s. Indeed, it is altogether automatic for Polish diplomats to react whenever they think (rightly or—as in this case—wrongly) that the “good name of the Polish nation” has been maligned. Unfortunately, engaging a historian in a debate about the past should imply a degree of knowledge and expertise which Mr. Weremiuk visibly does not have. What he seems, however, to possess in abundance is sloppy methodology and bad will. Without any desire to lecture Mr. Weremiuk about the history of Jewish-Polish relations during the Holocaust, I feel obligated to point out—for the benefit of readers—some of the most egregious errors contained in his letter.

According to Mr. Wermiuk, I allegedly write about “Poland’s complicity with the Nazis.” Nothing of the sort; should Mr. Weremiuk read the article carefully and with an open mind, he would see that the wording, very precise, refers to historians who write that: “certain segments of Polish society were complicit in the extermination of their Jewish neighbours.” It is not Poland as such, but certain strata of the Polish society that took part in the implementation of the German genocidal project.

The whole paragraph in Mr. Weremiuk’s letter that touches upon the issue of the Polish “blue” police testifies to his deep lack of understanding of the discussed topic: “Blue” police was definitely not formed, as the Polish diplomat argues, of “collaborators or those who were forced by occupying forces to perform whatever roles they were told.” “Blue” police was made up, for the most part, of regular pre-war cops who continued, under the occupation, and with the blessing of the Polish resistance, to serve in the police forces, now under overall German command. And, at some point, in 1942, they became an important element in the German mechanism of mass murder.

Furthermore, these pre-war cops started to enthusiastically (and with horrifying efficiency) kill the Jews. I might even add, for Mr. Weremiuk’s further instruction, that in hundreds of well-documented cases (with many, many more to come), they went on to kill the Jews without any special German prodding. In fact, very often they killed the Jews without any German knowledge at all, acting entirely on their own—out of greed, hate and fear, to name but a few powerful reasons.

Therefore, Mr. Weremiuk, I do not suggest—as you write—that “Poland was the country behind the crimes of elusive and stateless Nazis.” I am very conscious of the terms used and that’s why I constantly use the term “Germans” to describe the authors of the Holocaust. Should Mr. Weremiuk read my article with good faith, he would have seen that not even once do I refer to the “stateless Nazis”! I write about the Germans. More important, however, I do not blame Poland, but I say very firmly that individuals and groups, members of the Polish society, committed horrible crimes against their Jewish neighbours. It is precisely this kind of historical research—as we can see from the Polish diplomat’s misguided and ill-informed letter—that is currently under attack in Poland.

Finally, a few words about Mr. Weremiuk’s disingenuous comment concerning the elevated number of Poles awarded the medal of the Righteous among the Nations. Using the Righteous Poles as a shield, in order to deflect all criticism of the wartime attitudes visible in the Polish society, has been a trademark of Polish diplomacy for far too long. The constant reminders and celebrations of Polish sacrifice and Polish righteousness at the time of the Shoah are nowadays a branding exercise of the historical policy of the Polish state directed at foreign audiences.

The underlying message, however—one that implies the frequency of help for the Jews—is a pernicious historical fallacy. The people who saved the Jews were a terrorized, small group who—above all else—feared being denounced to the Germans by their own neighbours, sometimes even by members of their own families. Unfortunately, there was little solidarity with the dying Jews. Some of the Righteous were so fearful of their neighbours that they kept quiet about their noble deeds for decades after the war. Using today their sacrifice and courage in order to gloss over the crimes committed against the Jews by other Poles is simply shameful.

Once again, the literature surrounding this issue is abundant. Should Mr. Weremiuk require further insights into the issue, I invite him to take my class this coming session; his office is but a few blocks away from my campus. Or simply to read something more pertinent than instructions from his superiors from Warsaw.