The problem with Iran's role in the fight against Islamic State 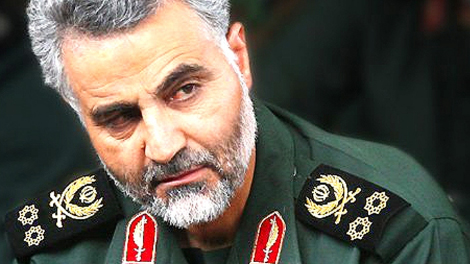 When I visited the Iraqi town of Suleiman Beg in October, it was a mostly deserted place that smelled of smoke and death.

At least one mass grave containing the bodies of Shia victims of the Sunni Islamist group Islamic State had been discovered nearby. A dog lay bloated and rotting in the sun outside the charred shell of an Islamic State courthouse. The Sunnis Arabs who once lived there had fled. A small force of Kurdish peshmerga fighters were in the town, as were other armed men who rolled through the empty streets in Toyota pickup trucks.

I was initially told the non-Kurdish fighters were Iraqi soldiers. In fact, they were members of the Badr Brigades, an Iranian-backed Shia militia. They didn’t want to be interviewed. Back then, Iran still made some efforts to conceal its leading role in Iraq’s fight against Islamic State. Iraq’s other allies include a U.S.-led coalition of Arab and Western states, Canada among them.

Iran doesn’t bother hiding in the background anymore. Qasem Soleimani, commander of the Quds Force of Iran’s Revolutionary Guards, was until recently a secretive figure. He is now openly photographed flanked by bodyguards as he directs operations against Islamic State in Tikrit, Saddam Hussein’s old home town north of Baghdad.

The United States has expressed only mild concern.

“The activities of the Iranians to support the Iraqi security forces is a positive thing in military terms against ISIL,” Gen. Martin Dempsey, chairman of the Joint Chiefs of Staff, told a Senate hearing in Washington, using an alternative acronym for Islamic State.

He continued: “The question is what comes after, in terms of their willingness to let Sunni families move back into their neighbourhoods, whether they work to restore the basic services that are going to be necessary, or whether it results in atrocities and retribution.”

But Iraq’s Shia militias and indeed its own official security forces have already carried out atrocities and retribution against Sunni Iraqis. These include the abuse and murder of captives, beheadings and, in one videotaped incident, the murder of a boy who appears to be about 13 years old.

Among the many root causes of Islamic State’s rise is the sectarianism of the Iraqi government, and now of the increasingly powerful non-state Shia militias—both of which fuel the Sunni resentment on which Islamic State feeds.

It was Iraq’s Sunni tribes, in partnership with America, that largely defeated Islamic State’s forebear, al-Qaeda in Iraq, in 2006 and 2007. Then the government of former Iraqi prime minister Nouri al-Maliki’s government turned against them.

“No longer useful to al-Maliki, and with ever-diminishing U.S. protection, they were instead harassed by the government they had served. Many were also arrested on spurious ‘terrorism’ grounds,” Michael Weiss and Hassan Hassan write in ISIS: Inside the Army of Terror, an excellent book whose title refers to Islamic State by yet another acronym.

Maliki has since been forced out, replaced by Haider al-Abadi, a less divisive Shia. But for Iraq’s Sunnis, the memory of betrayal still stings. And it is combined with fears about Iran’s growing footprint in their country.

Islamic State has slaughtered Sunnis by the hundreds, and Sunnis are taking part in the current campaign against it. But a popular uprising of the sort that Iraq’s Sunnis launched against al-Qaeda almost a decade ago will be difficult to achieve a second time if those Sunnis believe they are fighting for a sectarian government that answers to Iran.

Iran’s infiltration of Iraq has been helped along by America’s shrinking presence there.

Consider the case of Iraqi Kurds. They are among the West’s greatest allies in the Middle East. Largely secular and liberal, they have resolutely stood against Islamic State and other iterations of Islamist extremism for years. Before that, they fought the totalitarian fascism of Saddam Hussein’s Ba’ath party. We in the West have cut them loose when it suited us, yet they still crave our friendship.

Falah Mustafa Bakir, Iraqi Kurdistan’s foreign minister, told me what happened when Islamic State was on the verge of overrunning Kurdistan last June, an event that would have resulted in mass murder:

“We called upon our friends in the international community to come help. Because of the vicinity, because of the closeness, the Iranians played a role in the early days in providing some military support and ammunition,” he said in an October interview.

When the Kurds needed help, the Iranians were there. We were too, eventually. But we left Tehran an opening, and they exploited it. They’ve done the same all over Iraq.

This might not be a problem if Iran and the West shared similar goals in Iraq beyond the defeat of Islamic State. But they don’t. Iranian-backed militias were as fierce an enemy of the United States during its occupation of Iraq, as was al-Qaeda. Iran is a Shia theocracy. Its goals for Iraq do not include the emergence of a pluralistic democracy that is allied to the West.

Iran’s presence next door in Syria is an equally destructive catalyst. The civil war there has claimed more than 200,000 lives, uprooted more than 10 million people and destroyed a nation.

Of all the monsters rampaging through that country, the most blood-soaked by far is Syrian dictator Bashar al-Assad—he of the industrial-scale torture of prisoners, barrel bombs and poison gas. And Assad would have been gone long ago were it not for Iran.

Iran trains Assad’s soldiers and sends him Quds Force advisers. Hezbollah, an Iranian proxy force in Lebanon, has been instrumental in several Syrian government victories. Iran has even sent Afghan refugees to fight in Syria, paying them $500 and offering Iranian residency, according to a report in the Wall Street Journal.

“Syria is occupied by the Iranian regime. The person who runs the country is not Bashar al-Assad but Qasem Soleimani,” said former Syrian prime minister Riyad Hijab after he defected to the opposition.

That was in 2012. Things have gotten worse since. The revolution that once might have overthrown Assad and replaced his rule with something more decent is now dead, crushed between Islamic State and Assad. What’s left of Syria’s non-Islamist opposition feels abandoned by the West, because it has been. They wonder, with reason, why America bombs Islamic State but does so little to weaken a regime that gassed to death hundreds of its own citizens. Assad portrays himself as a bulwark against the very terrorism he helped create. Iran stands beside him.

In both countries we see the result of American President Barack Obama’s strange approach to the Middle East that manages to be both isolationist and vainglorious at the same time.

He thinks America should withdraw from the region, while seeming to assume that no other country will take its place—or perhaps that American influence will persist regardless. It won’t. As America retreats, Iran advances.