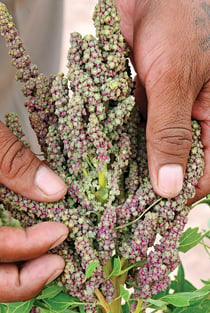 You’d think quinoa, the popular superfood adored by hippies and vegetarians, could do no harm. But in Bolivia, where most of the world’s quinoa is grown, the protein-filled crop has spurred violence between producers. Politicians are even calling for the government in La Paz, the capital, to send in the army.

Land traditionally used for growing quinoa, an indigenous staple for centuries, is scarce. This, combined with soaring prices—they have tripled in the past five years alone—has tensions running high in southwest Bolivia. Warring quinoa producers on the borders of the Potosí and Oruro departments recently attacked one another with dynamite, grenades and sticks, and three labourers were taken hostage during a standoff. Dozens have been hurt. A truce was reached by dividing 250 sq. km of quinoa plantations in half, with each side taking control of one half. But it’s harvest season, and new fights could soon erupt.

Bolivia’s quinoa production has tripled in a decade, bringing in $64 million in exports in 2011 alone. Miguel Choque of the National Association of Quinoa Producers dismisses reports of violence between producers. “This is a long-standing dispute,” he says, “and it’s not just about quinoa.” There’s also oil in those hills, he says. But he’s in La Paz, he admits, far from the tensions on the quinoa fields.