The real faces of ISIS: Sally Armstrong reports from Iraq

In a prison in northern Iraq, captured ISIS soldiers discuss their crimes and what drove them to their murderous ideology

The black bushy beard that makes Islamic State fighters look like oversized bullies is gone. So is the Darth Vader paraphernalia they wear as they swagger down the streets of captured cities like Mosul. Here in the Adult Reform Prison in Duhoc, Iraqi Kurdistan, Muhamed Mahmoud’s face is boyish and clean shaven. He’s 20 years old and looks for all the world like a kid studying hotel management.

Like many ISIS recruits, he ran away from what he saw as a failed life in Mosul in June 2014 and joined Islamic State, commonly known as ISIS, because “they were all my friends.” He says the goal of ISIS is to “rule the whole world, to fly their flag everywhere and rule everyone by the Koran.”

RELATED: What the West knows about ISIS

His prison mate, Luqman Salih Mohammed, 29, says, “They want to kill employees of governments and rich people and people who are not Muslim.”

Mahmoud’s job was to arrange for the captured girls, Yazidi women mostly and preferably young pretty girls with blue eyes, to be given to the fighters. “Fighters had the right to any girl they wanted. The leaders could have four girls each. We kept the girls in a prison and asked the fighters to come and choose one for themselves.” But before taking a girl these ritualistic rapists had rules: First you invite her to convert to Islam. Then you can marry her and have sex with her. Second, if she refuses to convert she becomes a slave and you can have sex with her. 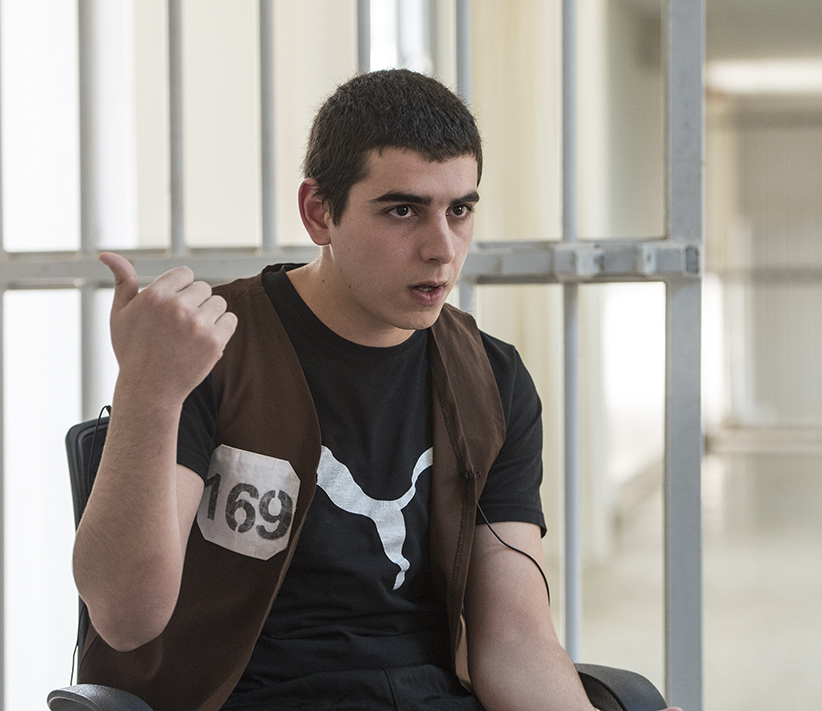 He knew many captives and says he saw a young girl slave—maybe 12 years old—cleaning the floor of a fighter’s house and carefully cleaning under his rifle while he slept. But he tells another tale of two girls who killed the man who was guarding them. They ran away but were caught, tortured and killed. He recounts his ghastly tales with such sang-froid it makes the listener wonder about the remorse he claims to have for the crimes he committed. He was convicted of terrorism and sentenced to 15 years in prison. When shown a photo of a girl whose family is trying to locate her, he says, “Her face is familiar to me.” The next question: how can the family arrange to have this girl released? He tries to cut a deal: “Get me out of here and I’ll do it for you. You just have to pay a ransom for the girl.”

In an exchange with a Maclean’s reporter about the modus operandi of the dreaded ISIS, he reveals the basics:

“Why so much bloodlust, why so much killing?” he is asked.

“If you are not Muslim, I must kill you,” he replies.

“What is your religion?” he responds.

Mahmoud—silence—then this: he carefully draws his hand across his throat. 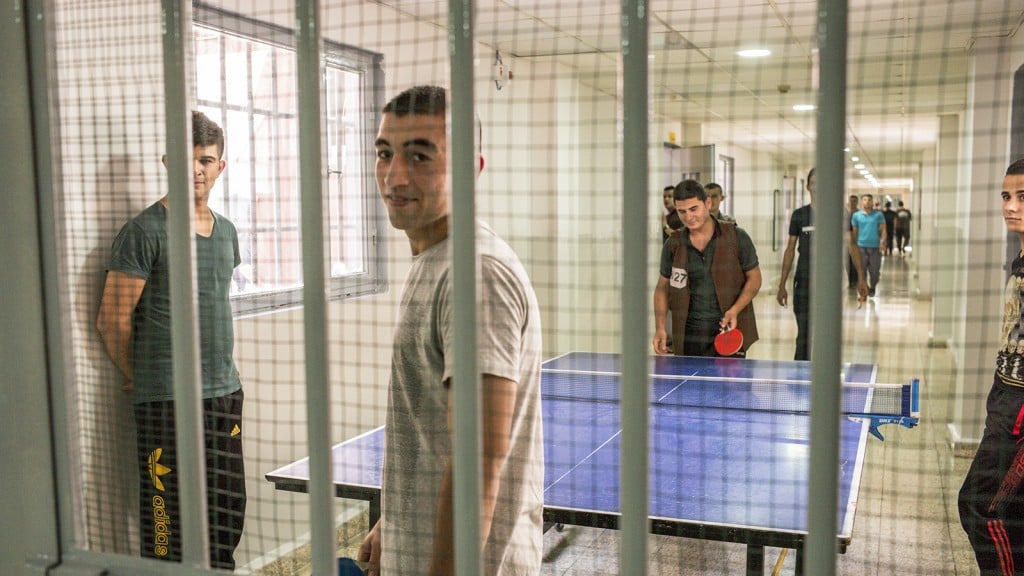 The 235 captured men here are mostly young, mostly seeking a thrill or running away from trouble. The ones in this division of the prison are foot soldiers who were captured by Kurdish fighters known as the peshmerga. One was having girlfriend problems when he joined ISIS, another was out of money and looking for work. A third was fighting with his parents.

There were plenty of hardliners, too. Qutayba Ahmed Qasim, 20, who comes from Aleppo, the city under siege in Syria, says he joined ISIS in 2012 because, “The enemies of Islam are my enemies. Allah is extremely important to me, he created me. So everyone must convert to Allah.” He’d witnessed the destruction Bashar Al-Assad rained down on Aleppo and decided to get even by joining a more brutal regime. He was captured by the peshmerga wearing a suicide vest. In a staggeringly opportunistic defence of his actions, he says, “I was planning to bomb Shiites, not peshmerga, so they should not have arrested me.” When asked why he would want to kill fellow Muslims he says, “It’s true they pray like us but they aren’t true Muslims.”

Related reading: Inside the secret war in Iraq

He’s adamant that Islam is not a religion of killing. “We invite people to Allah if they refuse to convert”—from one of what they call the People of the Book religions: Christians and Jews—“they have to pay a ransom and get off the land. But if they are infidels [of another religion], they must be killed.”

He’s been convicted of terrorism and is serving seven years. He claims he’s ready to say he’s sorry to those innocents who died “but not to the ones who deserve to die.”

All of them claim the end is near for ISIS. “The peshmerga will win,” says Muthana Ibrahim, 28, who was hired as a cook for ISIS. “The whole world is against them.” 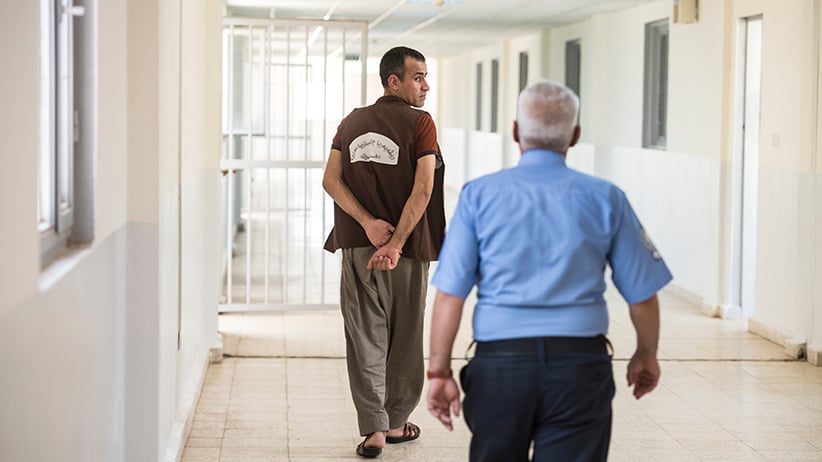 Prison life for these men is a model of rehabilitation. Muhammed Hassan Muhammed, the prison manager, travelled all over Europe and Scandinavia to examine modern reform policies. The facility is mostly white, pristine and quite spacious. The halls leading to the cells are broad, the corridors housing the prisoners have Ping-Pong tables. There are school classes as well as workshops in metalworking, woodworking, a sewing centre (the prison uniforms are sewn by the inmates), a psych-social support unit, a gymnasium with all the equipment a downtown gym would have, a library, an outdoor swimming pool and an enormous garden where the prisoners grow all the vegetables consumed by the staff and prisoners.

He explains that the Daesh (an Arabic acronym used as a pejorative for ISIS) prisoners in this facility have been convicted of a variety of crimes, including killing civilians and peshmerga soldiers. “Ninety-nine per cent are from Mosul and all the charges are terrorism because we don’t have genocide charges here. They are serving sentences that range from 10 to 15 to 20 years.”

But the place is extraordinarily calm. It seems excessive given the usual descriptions of jails in the region, and in fact the senior ISIS leaders who have been captured were not in this facility. But the manager (who looks like he could double as a cover on GQ magazine) says he feels strongly about rehabilitating the prisoners. “We try to change their outside first: no big beards, no cloak-like black clothes. We tell them praying every hour is not what the Koran says; they only need to pray five times a day.”

He also says 70 per cent of the ISIS prisoners regret what they have done to other people. But a guard who was in attendance during the interviews Maclean’s did with the prisoners had another point of view. When Luqman Salih Mohammed, 29, showed remorse for the crimes for which he was sentenced to 15 years and said, “May God revenge and destroy ISIS,” the guard said, “Don’t kid yourself; these men would rape you and behead you in a second. They’re all animals.” 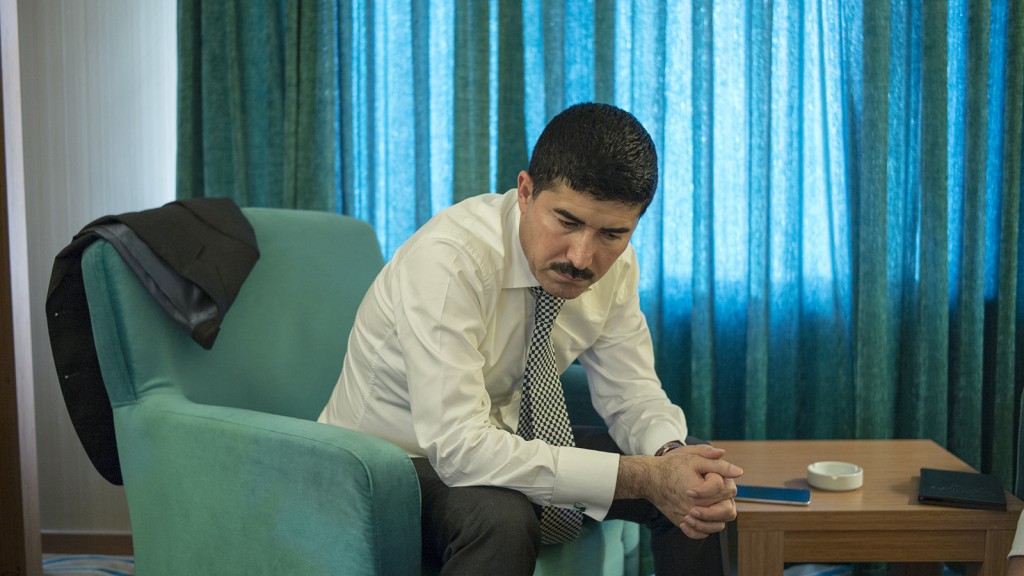 Hussein Hasoon, member of the high government committee on the recognition of genocide against Yazidi Kurds and other religious and ethnic groups, in Erbil, Iraq, July 25, 2016. (Photograph by Peter Bregg C.M.)

It’s easy to presume they are at least psychopaths—chopping off heads, raping little girls, throwing people accused of homosexuality off the roofs of five-storey buildings, burning people alive in cages—but Payam Akhavan, a former prosecutor at the International Criminal Court in the Hague and currently a professor at McGill University’s law school in Montreal, feels that’s too easy a description. “They are ordinary people who are furiously angry and brainwashed. If there is to be coexistence in this region there needs to be an apology and contrition. Justice is about transforming the rules of power and legitimacy, it’s not just about the law. These people need to be inoculated against the disease of terrorism.”

It’s hard to know if these seemingly apologetic prisoners wish they were back on the outside capturing Yazidi girls as sex slaves and meting out their hideous punishments on journalists, humanitarian aid workers and innocent bystanders, or if they have truly come in out of the storm of hate and are reforming into something resembling citizens. As each one walks away, hands clasped behind his back, returning to his cell in the company of a guard, you wonder: which one would drive a truck into a crowd of families on Bastille Day in Nice, which one would take an automatic rifle to a bar in Orlando, which one would join a cell in Paris or Brussels to spread terror and death?

When the interview with Muhamed Mahmoud ends, Hussein Hasoon, a Yazidi man who is a member of the High Government Commission on the Recognition of Genocide Against Yazidis, Kurds and other Religious and Ethnic Groups, walks over to him and says, “Do you know who I am? I am Yazidi. I was on Shingal Mountain when you attacked us. I don’t hate you.” Mahmoud stared at him—speechless—and then there were tears in his eyes.