The real ramifications of the Iran deal go well beyond nukes

Iran’s non-nuclear activities may not be addressed in the deal, but they will be affected by it, writes Michael Petrou 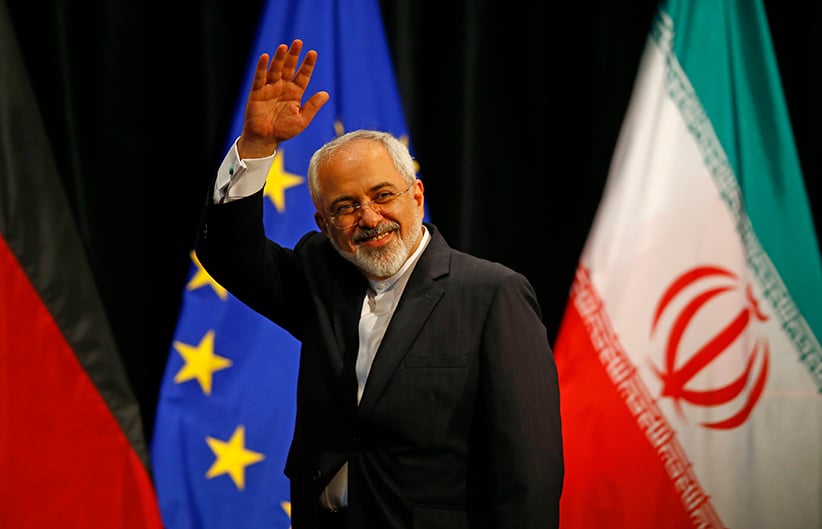 Iranian Foreign Minister Mohammad Javad Zarif waves after a plenary session at the United Nations building in Vienna, Austria July 14, 2015. Iran and six major world powers reached a nuclear deal on Tuesday, capping more than a decade of on-off negotiations with an agreement that could potentially transform the Middle East, and which Israel called an “historic surrender”. (Leonhard Foeger/Reuters)

The most significant repercussions of the deal between Iran and six major world powers to limit Iran’s nuclear activities in exchange for sanctions relief may have little directly to do with nuclear weapons, but rather, Iran’s imminently expanding regional clout, and what it will do with it.

The deal, despite the marathon high-level talks required to reach it and the attention it has received, is narrow in its official scope. This is not a “grand bargain” that will transform diplomatic relations between Tehran and Washington. Embassies are not set to reopen. Enemies have not become friends.

U.S. President Barack Obama was bargaining to reduce the risk of a nuclear-armed Iran. Left off the table was Iran’s support for terrorism, its human rights violations, and its backing of Syrian dictator Bashar al-Assad, who Obama has previously said must step aside.

But although Iran’s non-nuclear activities are not addressed in the deal, they will be affected by it, and by the massive influx of cash Iran will receive from oil revenue, once sanctions are eased.

According to an Israeli diplomat, Hezbollah, an Iranian proxy militia mostly based in Lebanon but lately fighting on the side of Assad in Syria, has been “bleeding” in that country, weakened because Iran lacks the resources to fully arm and support it.

Similarly in Yemen, the diplomat says, Iranian support for Houthi rebels has been hampered by the financial crunch of sanctions. Sanctions relief, he says, will allow Iran to be much more aggressive in its attempts to spread influence and back proxies throughout the region. This, the diplomat says, is a concern not just to Israel, but also to Sunni Arab states such as Saudi Arabia and Jordan.

Patrick Clawson, Morningstar senior fellow at the Washington Institute for Near East Policy, notes that Iran has shown it will invest in strengthening its regional influence, even when its financial resources are curtailed. Already, Iranian proxies are active in Syria, Lebanon, Yemen and Iraq. But Clawson says the nuclear deal gives Iran’s leadership added incentive to double-down on this strategy.

Iranian Supreme Leader Ayatollah Ali Khamenei, Clawson says, will want to demonstrate that the deal is an Iranian victory. Shrinking Iran’s role in the region won’t accomplish this.

“The Revolutionary Guards and others will come to [Khamenei] and say: ‘We have to prove that this agreement proves how strong we are, not that the West can force us to compromise. And the way to do this is by stepping up our activities in support of Assad, and stepping up what we’re doing with the Houthis and with the militias in Iraq.’ In other words, if Iran wants to present this as a victory, it has to show that this agreement empowered it.”

Clawson says America, therefore, needs to challenge Iran in areas outside the deal’s framework. Sanctions imposed because of Iran’s nuclear program can be lifted, for example. Those related to human rights abuses or support for terrorism should not.

But some observers think America has already made concessions unrelated to the nuclear file in an effort to secure the deal. This belief is most pronounced regarding Syria. There, the United States and several of its allies, including Canada, are engaged in a bombing campaign against the jihadist group Islamic State, which has carried out a campaign of murder, rape and ethnic cleansing in its self-declared caliphate.

Islamic State’s atrocities, however, are surpassed in scale by those of Iran’s ally Assad, whose regime remains unmolested by Western bombs. Some Syrian victims of Assad’s regime believe America has sold them out in an effort to finalize the nuclear deal. These suspicions will not be lessened if Iranian proxies intensify their intervention in the country.

Related: Why we’re failing to hold Assad to account

America will also have to work to reassure regional allies who oppose Iran that it has not lessened its commitment to them. Clawson says Saudi Arabia will likely want to strengthen itself militarily, now that Iran is growing stronger.

“I think it’s realistic to say it’s going to lead to an arms race,” Clawson says of the deal. “Whether or not that arms race is going to involve nuclear capabilities depends on what else we can offer the Saudis. They want something that’s going to intimidate the Iranians”—such as a stronger air force.

Iran, faced with an assertive Saudi Arabia, will push back. There are numerous places in the region where Iranian interests clash with those of Saudi Arabia and other Sunni states. A nuclear deal will not necessarily make the Middle East a more peaceful place.