The return of Gulbuddin Hekmatyar, the 'Butcher of Kabul' 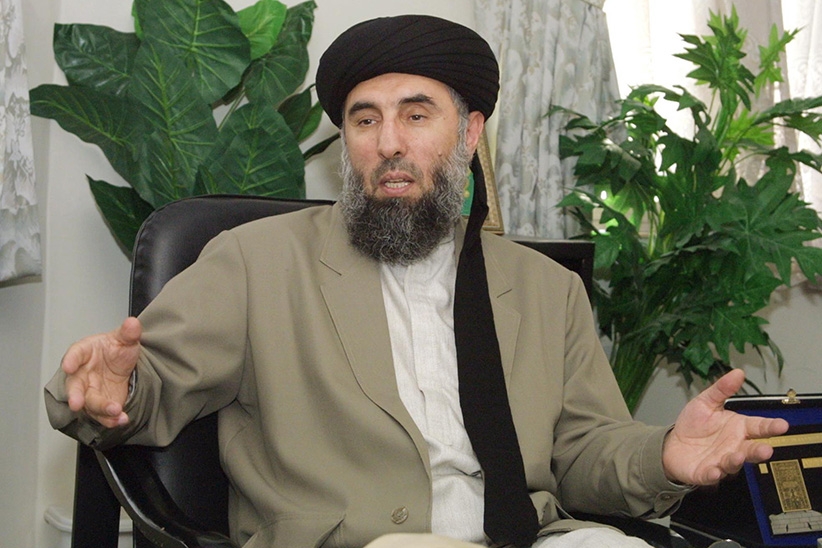 Gulbuddin Hekmatyar, a former Afghan warlord in exile in Iran, speaks during an interview with the AFP in Tehran October 17, 2001. (Atta Kenare/AFP/Getty Images)

After months of on-and-off negotiations, the Afghan National Unity Government announced on Thursday that it had finally inked a peace deal with the notorious warlord Gulbuddin Hekmatyar. The news came at a time when President Ashraf Ghani is desperate for positive news after a largely disastrous two years in power.

In signing the deal, Hekmatyar, a U.S.- and UN-designated global terrorist, will be granted immunity for his participation in war crimes during Afghanistan’s brutal 1990s civil war. His Hezb-i-Islami (HI) faction was responsible for some of the worst atrocities targeting civilians.

But some are touting the deal as a potential game-changer. It’s the first agreement between warring parties in Afghanistan’s recent history that has been brokered exclusively by Afghans, a point not lost on U.S. embassy officials in Kabul who encouraged the Afghan government to pursue “an Afghan-led, Afghan-owned peace process that results in armed groups ceasing violence, breaking ties with international terrorist groups, and accepting the Constitution.”

The positives are no doubt enticing: Hekmatyar, who is rumoured to be hiding in Pakistan, is considered relatively untainted by the years of foreign occupation in Afghanistan. Since 2001, his HI militia has either fought alongside the Taliban or unilaterally attacked occupying forces. He has insisted that foreign armies leave Afghanistan, a sentiment shared by a growing number of Afghans, including the Taliban.

Bringing Hekmatyar into the government fold has the potential to undercut one of the Taliban’s key justifications for continuing their fight.

“The Taliban claim they are Afghan nationalists,” says Afrasiab Khattak, a retired Pakistani senator who met Hekmatyar in 1991. “So is Hekmatyar. The Taliban have repeatedly said one of their primary goals is to force the foreign occupiers out of Afghanistan. Now there is someone entering the political scene in Kabul who is saying the same thing. For Afghans who support the Taliban, there is now an alternative.”

Hekmatyar’s former supporters also occupy some key government positions, including the deputy to Afghanistan CEO Abdullah Abdullah, and hold 16 of 249 seats in parliament. Hekmatyar himself endorsed Ghani during the 2014 presidential elections. Upon his return to Afghanistan, he would potentially have a ready store of supporters to form a large political party, Khattak says.

But those who lived through the HI’s relentless bombing campaigns have not forgotten his war crimes, partly committed during his tenure as Afghanistan’s prime minister in the early 1990s. Hekmatyar has also switched sides so often over the years that few trust he will maintain his support for the central government once he has established himself in Afghanistan.

“This is a desperation move both on the part of Ghani and Hekmatyar,” says one senior Afghan official with deep knowledge of Kabul’s palace intrigues who requested anonymity. “Ghani is realizing that his plan to have Western educated technocrats running the country has failed. He needs to shore up support with the former warlords. Hekmatyar is feeling isolated. He has lost most of his key supporters to other political parties, and his fighters have mostly abandoned him to join the Taliban and now ISIS. He is a spent force.”

But according to Khattak, the deal with Hekmatyar could have an impact on shifting public perception in favour of the government. His former supporters are scattered throughout the different political parties, he says. He has a line of communication with Pakistan that is not tainted by accusations of Indian influence. “If he can take on the role of mediator, then there is hope,” says Khattak.

But those are some big ifs. Hekmatyar’s reputation sets the bar dangerously high. The senior government official in Kabul says plans are already in the works for massive demonstrations against the deal, which includes a US$100,000 monthly salary for Hekmatyar and tens of thousands of dollars more to support his family. Average Afghans, who subsist on less than $100 a month, will not be happy, he says.

Nonetheless, the return of the “Butcher of Kabul” promises to take the Afghan saga to another level—whether that is closer to peace or further down the road to collapse.