The royal reveal, then and now

How the first glimpse of Prince George compares to the introduction of Prince William, three decades earlier

The setting was the same both times: the brick and concrete Lindo Wing at St. Mary’s hospital. But when William and Kate introduced their new prince to royal watchers on July 23, it was in many ways a much different scene from 31 years earlier, when William himself was brought into the world. 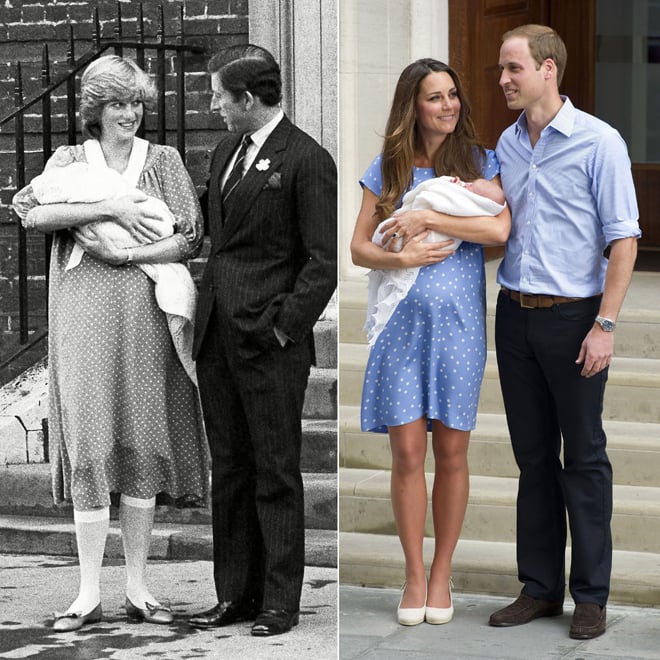 Here’s how the two events compared: 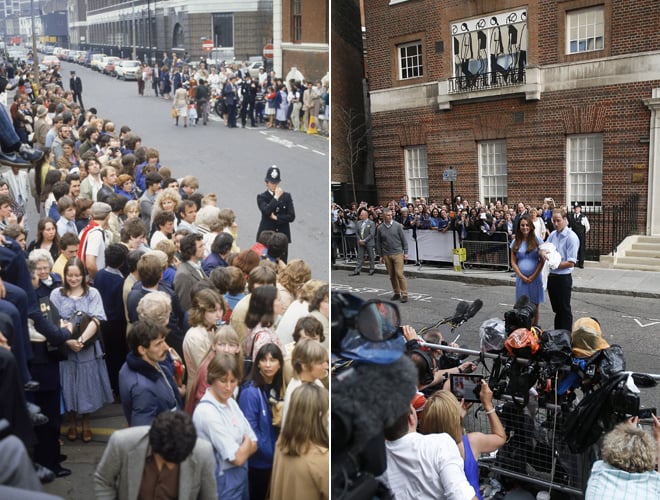 Time spent with the crowd before leaving for Kensington Palace:
1982: 45 seconds
2013: three minutes 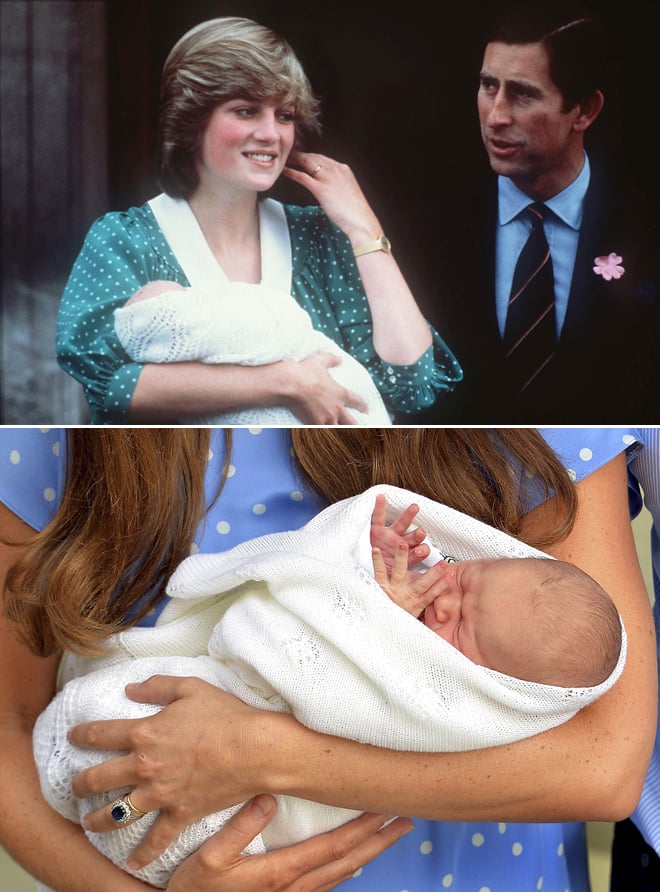 View of the new babe:
1982: Baby Windsor was so tightly swaddled in a white, knitted blanket, that only part of his face was visible.
2013: Baby Cambridge was also tightly wrapped in a white blanket. Just the top of his head and a tiny hand were visible. 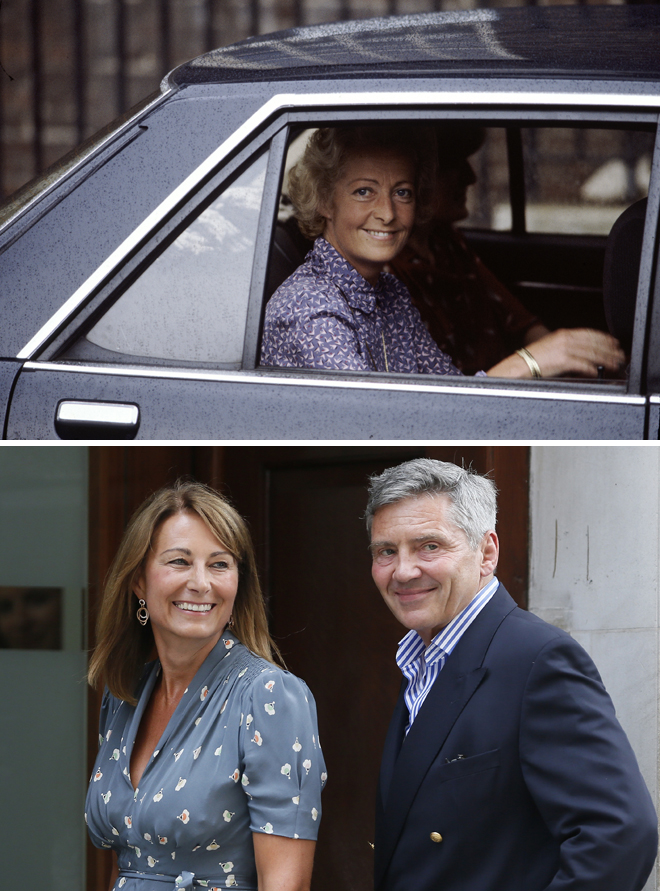 Visitors:
1982: Queen Elizabeth II, 20 minutes, as well as Diana’s parents, the 8th Earl Spencer and Frances Shand-Kydd (divorced), and Diana’s sister, Lady Jane Fellowes. “Everything’s marvellous,” said Charles, after a three-hour visit with Di and Wills.
2013: Carole and Michael Middleton, one hour, and Charles and Camilla, 20 minutes. He’s “absolutely beautiful,” Carole Middleton told waiting press after exiting St. Mary’s Hospital, in a happy, spontaneous breach of protocol that a commoner was the first to comment on the royal heir. 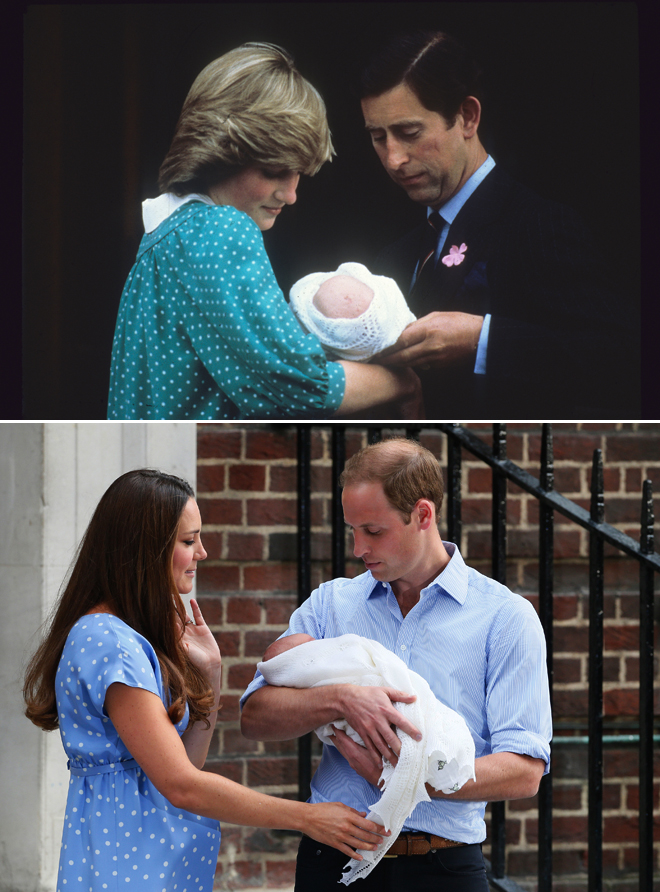 The hand-off:
1982: Charles briefly held his boy, before passing the baby to Diana.
2013: Kate came out holding her son, before handing him to Will who, very much the modern ideal of the involved dad, held his young son for the remainder of their turn in front of the press. 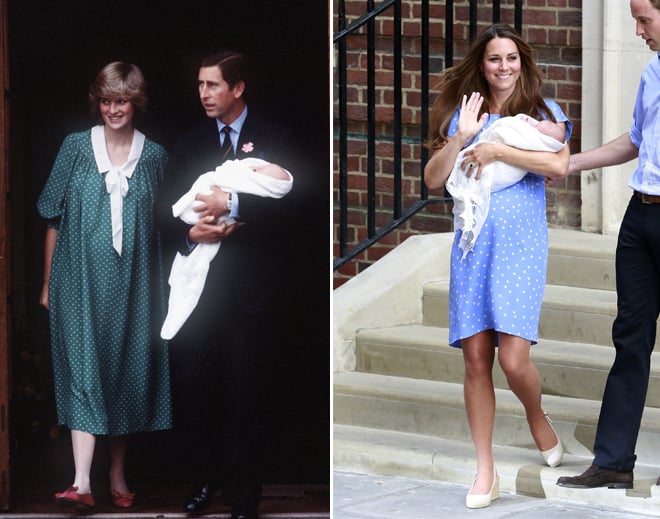 Attire:
1982: Charles wore a stern, dark suit and matching, dark tie. Diana wore a flowing, green, polka-dot dress with a giant white bow. Her dress, slightly infantile in its look, as maternity wear then was, accentuated just how young the Princess of Wales was (she was just 20, while Charles was a 15 years her senior).
2013: Informality ruled. Even the bodyguards wore sweaters and loafers. Both Will and Kate were dressed in baby blue, to honour their new son. Kate’s polka-dot dress was reminiscent of the one chosen by Diana. 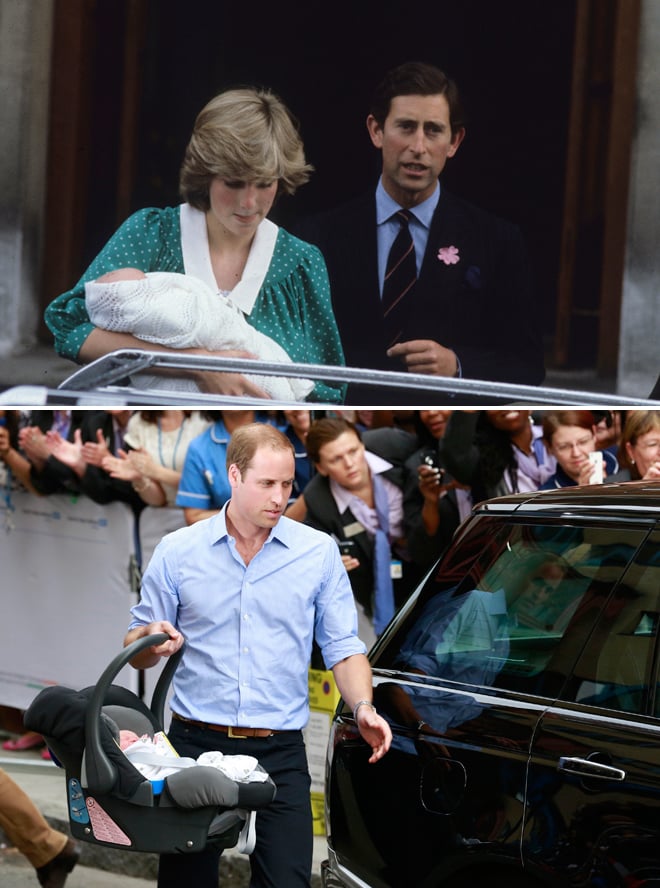 Car:
1982: A navy blue Ford Granada Ghia Estate. Charles and Diana both climbed into the back of the Ford station wagon, to be chauffeured in the short drive to Kensington Palace; Diana held Will on her lap. The new parents later caught flak for not having strapped young William into a car seat.
2013: A black, British-made Land Rover, a favourite of the royals. Kate rode in the back of the Landie with her newborn son; his dad carried him into the SUV—in an infant car seat, of course. The duke of Cambridge had by then rolled his pale blue shirt to the elbows, and took the wheel, driving the trio to Kensington Palace where the Queen would meet her new great-grandson, the third heir to the throne.