The slow roasting of Jeff Sessions

For two and half hours the U.S. attorney general went around in circles—and America got no closer to solving its mess 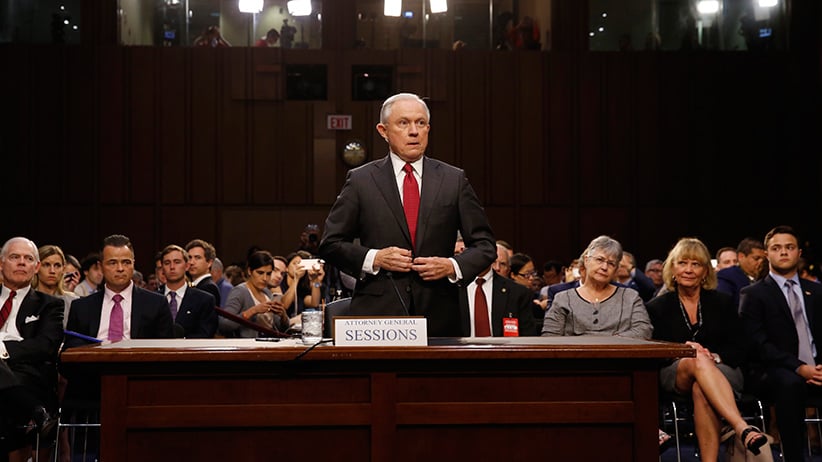 A small but important man, unfailingly polite but not immune to ire, an Eagle Scout and churchgoer, born on Christmas Eve of 1946, married to the same woman since Richard Nixon was president, named for two giants of the Lost Cause of the Confederacy: Jefferson Beauregard Sessions III.

It is 11 months ago. Still a member of the United States Senate from his native Alabama—and barely known beyond it—he is standing outside a gas station on Massachusetts Avenue in Washington on a desperately hot and humid day, waiting for the light to change, having just come from a confabulation of his caucus with presidential candidate Donald Trump.

(Can you remember so far back into the past that ‘The Donald’ was merely the Republican front-runner but not yet the party’s official candidate—before that infamous audio tape became public?)

“There were a number of people you could just visibly see warming up and becoming very enthusiastic,” Sessions is saying. “He states his views with clarity and force, and you want that. The guy’s got some charisma here. The guy is a force.”

Two weeks after that, Cleveland, Ohio. “For 30 years, our right and decent people have rightly pleaded with their leaders for an end to the lawlessness . . . to this legitimate plea, our elites have responded with disdain, dismissal, and scorn,” Sessions declaims from the stage. “Donald Trump is the leader who will bring change. He has the strength, the courage, and the will to get it done.”

Look now at the price for this man’s early fealty to the poobah. It is Tuesday afternoon in Washington, another pavement-melter. The Senate Intelligence Committee, sudden celebrities of the C-SPAN set, masses in the chamber. Burr of North Carolina, Warner of Virginia, Feinstein and Harris of California, Rubio of Florida, Blunt of Missouri, Wyden of Oregon, et alia, have come to barbecue Jeff Sessions, who has been marinating since 2016—since becoming the first U.S. senator to endorse Trump—in his own juice.

For Intelligence, it is the third titanic powwow in a week. (Covering these things is like having season tickets for the opera —Figaro, The Magic Flute, Comey fan tutte.) Trump is in Wisconsin with his daughter Ivanka, talking up real jobs for real people.

Back in Washington, the I-word—impeachment—is fluttering above the Democratic members like a butterfly, teasingly out of reach but destined eventually to alight. “We’re not there yet,” one leader—Steny Hoyer of Maryland—says at a “pen and pad” briefing in the Capitol, his emphasis on “yet.”

The Eagle Scout is in the witness chair, being roasted from one side. (A couple of the Republicans baste him with soft butter.) His wife, Mary, is seated at his left, next to a shaven, muscular guard. There is a long spate of Jabberwocky from the Democrats about “executive privilege,” prompted by the attorney general’s refusal to answer questions about his conversations with the president because the president has to power to direct him not to answer even though the president has not so directed. Got it?

The wider world shrugs. The Dow is up 90 to a record high. The U.S. television news anchor Greta Van Susteren packs up and leaves before the inquiry is over.

As with James Comey and Dan Coats and Rod Rosenstein the week before, today’s inquisition centres on who met whom and when, and if the cited “whom” was an overweight Russian ambassador whose name—keess-LYAK—not many can correctly pronounce.

And, of course, what did the President know, and when did he tweet it?

“The suggestion that I participated in any collusion or that I was aware of any collusion with the Russian government to hurt this country, which I have served with honor for over 35 years, or to undermine the integrity of our democratic process, is an appalling and detestable lie,” says Sessions, substituting personal offence for an explicit testament.

“I did not recuse myself from defending my honour against scurrilous and false allegations,” he goes on. Then, the aw-shucks drawl: “I have no knowledge beyond what has been publicly reported and I don’t even read that.” And “I know nothing but what I’ve read in the paper.”

What he—and everyone else—has read in the paper the past two days is the gossamer intimation that the president may decide to terminate Robert Mueller, the special investigator whose report—Next month? Next year? Next century?—may determine whether or not the I-word is invoked in Congress for real.

Does the president have confidence in Mueller, the Alabaman is asked.

RELATED: Who is Robert Meuller?

And of course, if he had talked to Trump, he wouldn’t spill it anyway.

Then there was that day last April at the Mayflower Hotel when Trump delivered—passionlessly, as if reading it for the first time—his first “major foreign policy speech,” the one in which he promised to establish a foreign policy “that replaces randomness with purpose, ideology with strategy, and chaos with peace,” a nirvana he has not even been able to achieve within his own administration. Again, it has been mooted that Attorney General Sessions rubbed elbows at the posh hostelry with Ambassador Sergey Kislyak for a few seconds, or just long enough for them to have worked out the nefarious destabilization of the electoral system in all 50 states.

“Let me state this clearly, colleagues,” Sessions retorts. “I have never met with or had any conversation with any Russians or any foreign officials concerning any type of interference with any campaign or election in the United States. Further, I have no knowledge of any such conversations by anyone connected to the Trump campaign.”

“I believe the American people have had it with stonewalling,” snarls the angular Ron Wyden, of Oregon. “Americans don’t want to hear that answers to relevant questions are privileged or off limits. We are talking about an attack on our democratic institutions and stonewalling of any kind is unacceptable.’’

“I am not stonewalling,” snaps Sessions. “I am following the historic policies of the Department of Justice.’’

This goes on for two and one-half hours.

“It’s like ‘Through the Looking Glass,’” says the Attorney General.

Senator Jim Risch of Idaho nails it in a sentence: “We’re really no different from where this whole thing started.”