The spy who became a star 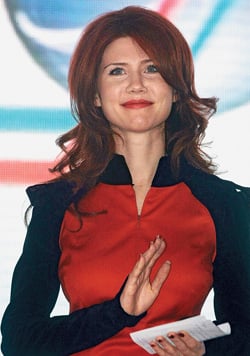 When a Russian spy ring was discovered in the U.S. last summer, one agent—Anna Vasilyvna Chapman, 29—became the subject of scrutiny and some ridicule in the United States. Now, she’s running as a parliamentary candidate for Vladimir Putin’s United Russia party in her hometown of Volgograd. Being a national hero, she’ll probably win.

As the media circus buzzed around the Cold War-style scandal of Russian spies operating in the U.S. for more than a decade, the tabloids set their crosshairs on Chapman. Allusions were made to femme fatale archetypes and James Bond villainesses. Countless news stories focused exclusively on her sex appeal and the various broken hearts she left in her wake. On NBC’s Tonight Show, Jay Leno asked Vice President Joe Biden if there are “any spies that hot [in the U.S.]?” Biden, equally quick with a wince-worthy one-liner, replied with Obama-like inflection: “Let me be clear, it wasn’t my idea to send her back.”

There’s no doubt that Chapman has capitalized on her beauty and glamour to bolster her public image following the public shame of her deportation to the motherland. She has posed provocatively for the Russian version of Maxim. If elected to the State Duma, Chapman would join Playboy pin-up and two-time Olympic gymnast Svetlana Khorkina, 32, who serves as deputy chairwoman of the Duma’s Youth Affairs Committee. “If [we have] more beautiful girls [in parliament], my colleagues working here will considerably increase the Duma attendance,” said Khorkina following her election in 2007. “We’ll consider it our great input.”

Despite Khorkina’s limited expectations of the contributions young women could make in Russian governance, Chapman is a savvy operator. After all, she worked as a foreign agent unbeknownst to the U.S. government while running a New York real estate firm as her cover for three years. Currently, she hosts two TV programs and has plans to launch her own brand of products, from perfume to vodka.

She also has all the indicators of a natural politician. After being hired last October as an adviser to the president of FundServiceBank, the official bank of the Russian space agency, a company statement described her as a “creative and multi-faceted employee.” In her new capacity, she attended the launch of a spacecraft in Kazakhstan. Two months later, she was appointed by Putin to the public council of United Russia’s pro-Kremlin Young Guard, the party wing tasked with inspiring nationalist fervour and pro-Putin idolatry among Russia’s youth.

But given the authoritarian old boys’ club that pervades the Duma, and Putin’s habit of appointing symbolic apparatchiks to party posts (his judo coach, suspected mistresses, etc.), it’s unclear how Chapman will establish herself as a political force in Russia. While she has gone from a secret agent to a political sex symbol, Khorkina may be right—Anna Chapman’s role in Russian politics may likely be limited to photo ops.