Before the mass protests that led to the fall of the Berlin Wall, a group of teenagers dared to challenge the system and paid a hefty price.

By By Frank Jordans, The Associated Press November 5, 2014 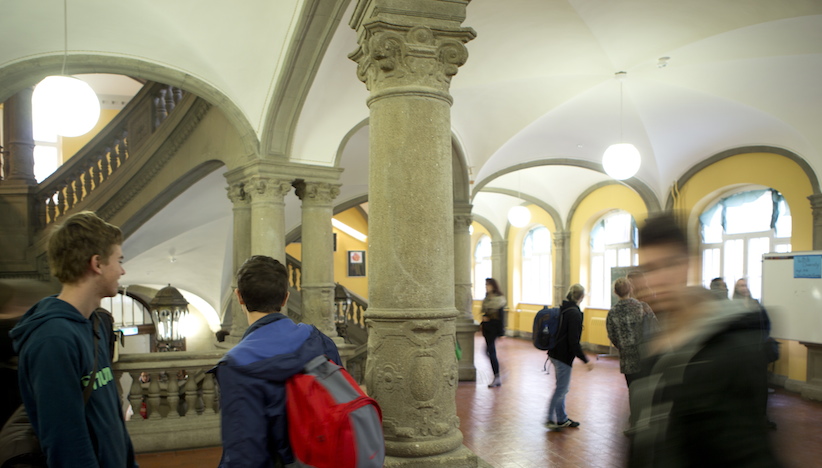 BERLIN – Kai Feller was 16 when his fellow students put him on trial.

On that early autumn day in 1988, pupils stood up to denounce Feller and seven other troublemakers as “traitors” and “pacifists.” Then the class voted to expel Feller from the official youth movement, membership of which was compulsory for anyone with ambition in communist East Germany.

Before the mass protests that led to the fall of the Berlin Wall, a group of teenagers dared to challenge the system and paid a hefty price. Yet they made their mark on history – inspiring many others, including of their parents’ generation, to follow their example in questioning authority.

In the Kafka-esque world of East Germany, the students were punished for doing precisely what they were told to do: post their views on the bulletin board of a new “Speakers Corner” the elite Carl-von-Ossietzky high school in east Berlin set up near its entrance.

“Even in East Germany we knew that Speakers Corner was the place in London where anyone could say anything,” recalled Philipp Lengsfeld, another of the expelled students. “So we decided to test the limits a bit.”

The eight students used the bulletin board to praise labour strikes in neighbouring Poland, call attention to a growing neo-Nazi movement and air an ironic poem about an East German soldier’s love for his Kalashnikov rifle. Feller committed the further sin of collecting signatures for a petition against East Germany’s annual military parade.

Many students who had initially joined the rebellion disavowed the petition. But Feller, Lengsfeld and six others seen as ringleaders refused to back down, even after authorities gave them a chance to repent.

“At 16 we didn’t think pragmatically,” Lengsfeld said. “We wanted to see this through.”

The mock trials – watched by adults standing silently at the back of the classrooms – had been carefully orchestrated to give the official punishment an air of democratic legitimacy. Alexander Krohn, one of the few who refused to denounce his fellow pupils, described the proceedings as a “kangaroo court.”

Krohn, who was suspended for refusing to take part in denunciations, said it was a matter of honour for him to support his classmates, some of whom also belonged to a loose group of punk music fans.

“We didn’t want to say the opposite of what we thought,” he told The Associated Press, “which for the majority of the other students was normal.”

A few days later the eight students were summoned to an assembly – and one by one, expelled.

“Our entire world collapsed,” said Lengsfeld. “We were sitting outside the school staring into the abyss.”

After their expulsion, the eight were treated like outcasts. Four faced a life-long ban from all schools in East Germany.

Their case was initially taken up by East Germany’s tiny opposition movement, estimated at the time to number just a few hundred people. Then it hit West German news broadcasts, bouncing back across the Iron Curtain as many ordinary East Germans secretly tuned in to western channels.

Within weeks the so-called Ossietzky-affair had prompted parts of the country’s elite to openly question the system, said Ilko-Sascha Kowalczuk, a historian and expert on East Germany’s opposition movement.

“These were their own children,” he said. “They were young people who had been considered the future of the system.”

Anger about the case also fueled widespread dissatisfaction with the education system and the person who ran it, Margot Honecker – wife of East German leader Erich Honecker. She was one of the most hated people in the country for making political propaganda a core part of the curriculum at the expense of more useful lessons.

Historical documents show that Honecker – nicknamed “the purple dragon” and now living out her days in Chile – personally intervened to push for the crackdown on the Ossietzky students, even though many had been promising pupils and none had called outright for the fall of the Wall.

“People were really annoyed by what the government was doing to their children’s education,” said Benjamin Linder, one of the four students who received the harshest punishment. “I think that’s why this case resonated so much. It was fairly absurd that they were accusing us of spreading pacifism when the school was named after Carl von Ossietzky.” The Nobel peace laureate and writer, who died in 1938 after being persecuted by the Nazis, had also been an ardent pacifist.

Unaware the Berlin Wall would crumble just a year later, Lengsfeld obtained permission to leave the country and go to England, where his mother lived in exile.

Lengsfeld told the AP that the experience prompted him to go into politics. The 42-year-old is now a national lawmaker. His office is situated on the same spot where Margot Honecker’s Ministry of Education once stood.

Feller, despite growing up without religion, found refuge in a church school that wasn’t part of the official education system. Feller stayed with the church and became a Protestant pastor.

“Christianity convinced me,” he said.

Lindner got a job working with disabled children, but committed his free time to the growing opposition movement. “Of course it was terrible to be kicked out of school and all, but I suddenly felt a great sense of freedom,” he said. “They had pushed us into a corner and there was no way back.”

It was not long before Lindner was able to resume his education. In November 1989 – the month the Berlin Wall came down – the authorities announced that the four students who had been permanently expelled could return to school.

Lindner is now a professor of neurophysics at Berlin’s Humboldt University.