The tragedy of the Istanbul attack

How Istanbul—once set to become one the great cities of Europe—has slid, along with the rest of Turkey, into war and turmoil 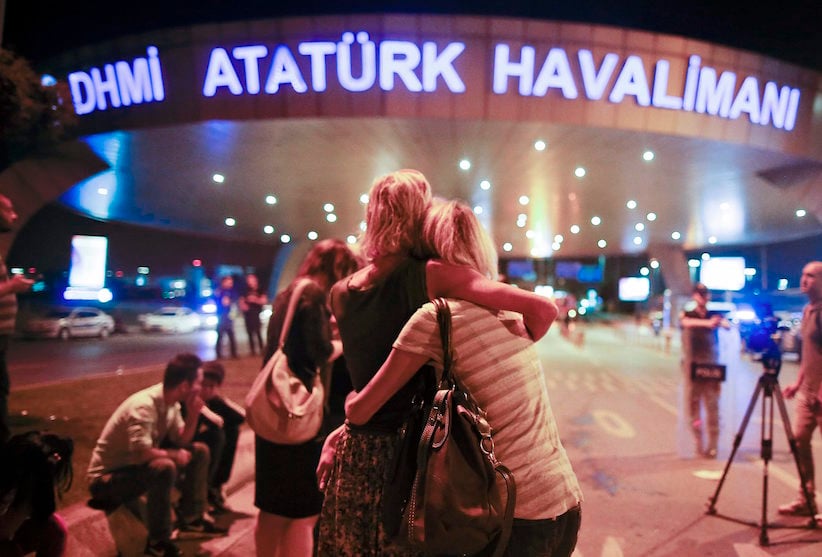 For anyone who has travelled through Istanbul’s Ataturk International Airport, the events of June 28 will leave a lasting impression. There is barely a moment when the entrance to the airport is not bustling with people. Day and night, Europe’s third-largest travel hub is a wild flurry of activity: taxis roaring in and out, travel agency buses bullying their way through thousands of bewildered wayfarers, long queues waiting for the shuttle to Istanbul’s iconic Taksim Square.

It is jam packed, and poorly designed for the throngs of people it must accommodate, which makes it the perfect target for terrorists.

Finally, what many observers had predicted would happen, happened: a group of three attackers, allegedly from the self-styled Islamic State, armed with Kalashnikovs and suicide belts opened fire. In the ensuing panic, there would have been nowhere to hide and, when security officers confronted the attackers, the blasts from their suicide belts were bound to cause maximum casualties. And they did: once the dust settled, 41 people were dead, another 239 injured.  The death toll is expected to rise.

For many, Ataturk airport has become the symbol of Turkey’s meteoric rise over the past decade and a half. Arriving there gives one a sense of just how central Istanbul has become in the economic and cultural life of Europe. It’s a place where east and west literally converge, with hundreds of flights arriving every day from the Middle East and Europe. It is a reminder that the first decade of the 21st century belonged to Turkey.

From the ashes of economic collapse and the legacy of military coups, Istanbul rose to become one of the world’s fastest-growing economies, buoyed by a construction boom and a flood of tourists. By the summer of 2015, it had become the fifth-most visited city in the world, overtaking New York. Turkey’s construction companies were in demand throughout the Middle East, Central Asia and Russia.

But much has changed. Over the past five years, Turkey has seen its fortunes steadily decline. Global events—the wars in the Middle East, the shifting geopolitical landscape including the re-emergence of Russia and Iran on the international stage—have conspired to push Turkey back to the kind of instability Turks had hoped was left for the history books.

The results have been devastating. Turkey now finds itself under siege on two very different fronts. The war against the ultra-left-wing Kurdistan Workers’ Party, or PKK, which fought a bloody war for independence during the 1980s and 1990s, reignited last July after Syria’s Kurds took advantage of the Syrian civil war and annexed territory in Syria’s north bordering Turkey, where they established a socialist statelet. The move energized Turkey’s own leftist Kurds prompting the collapse of a fragile ceasefire between the PKK and the Turkish government.

On the other end of the political spectrum, Islamic State, ostensibly an extreme right-wing movement, capitalized on Turkey’s open-door policy for foreign fighters and support for Islamist groups fighting the Assad regime. Since the onset of the Syrian war, their strength in Turkey has grown, in part because the Turkish government initially turned a blind eye to their activities.

Turkey’s government now appears to be scrambling to undo the damage done by those ill-advised decisions. Recent peace overtures—a deal with Israel normalizing relations after they collapsed in 2010 and an official apology for the downing of a Russian bomber by Turkish fighter jets last year—point to a realization in Turkey that it must get its tourism industry, which relies heavily on Russian tourists, back on track if it is to weather the growing internal turmoil. Russia, which has backed Kurdish fighters in Syria, can also play a mediating role between the Kurds and the Turks, offering a way out of the rekindled Kurdish crisis. The detente with Israel, meanwhile, takes some steam out of accusations that Turkey is sliding down an Islamist slope.

But while the PKK and Islamic State both pose a serious threat to Turkey’s stability, some Turks complain Turkish authorities are wasting too many resources in the fight against the PKK when Islamic State is the bigger threat.

Indeed, the terrorist group has been responsible for some of the worst attacks inside Turkey in recent months, including a July 2015 attack on a gathering of pro-Kurdish activists in the town of Suruç, which took the lives of 32, mostly university students, and then another in October in Ankara targeting a demonstration by union activists that killed 102, Turkey’s worst single terrorist attack.

Other attacks have followed, against Kurds, Turkish security forces and soft targets, mostly tourists. The PKK, for its part, has focused its attacks on security forces, with one fighter telling Maclean’s the group would like to retaliate against Islamic State in Turkey but is hard pressed to find targets.

“They are too well-hidden,” he says. “But at least our brothers in Syria and Iraq are hitting them back.”

The attack on Ataturk airport adds more credence to the argument that Islamic State has emerged as Turkey’s prime enemy. The immediate economic and social impacts of its attacks far outweigh the damage done to Turkey by the distant war in the southeast, experts warn.

The Turkish government, however, is trying its best to put on a brave face. It announced the reopening of the Ataturk airport early Wednesday morning, only a few hours after the attack. But getting back to normal business will be much harder. Travel agencies are already reporting a dramatic decline in bookings for Istanbul and cancellations have rocked the tourism industry. The travel booking site Kayak.com shows airlines slashing their prices for the city. Ataturk Airport looks set to go eerily quiet.