The tragic story of the Grenfell Tower inferno

London is no stranger to economic inequality, but the story of Grenfell Tower is a particularly chilling one

The sense of horror was palpable on the streets of North Kensington this morning. It wasn’t just the smoke and soot in the air or the shriek of sirens and buzz of helicopters overhead, but the people themselves. In every shop, at every school gate and on every street corner, the residents of West London spoke of only one thing: The fire at Grenfell Tower.

At the time of my writing this, the blaze is still burning. So far, 12 people have been reported dead and 68 more are injured. Police say the number of dead and injured is expected to rise.

The blaze, which is reported to have started on the building’s fourth floor just before 1 am local time this morning, was biblical—the sort of rampaging inferno that instantly evoked memories of this area’s slum-riddled past, when impoverished residents, many of them new immigrants from the West Indies and North Africa, would regularly watch their derelict tenements succumb to fire due to poor safety standards.

But those days are long gone and Grenfell is now managed by the Kensington and Chelsea Tenant Management Organization, a government body that manages the social housing for the poorest residents of London’s richest borough. The question on the streets of North Kensington today was: Is the local authority of today any better than the slumlords of the past?

According to witness accounts, the fire is believed to have started on the fourth floor and may have been the result of a faulty kitchen appliance. Footage shows the flames travelling up the outside of the building at a ferocious rate, causing speculation that it may have been exacerbated by the building’s new exterior cladding—the result of a recent refurbishment in 2016.

Other residents have reported that there were no sprinklers or alarms and that no evacuation procedure was carried out—and very quickly, of course, it was far too late. The Grenfell Tower, like all state-owned London tower blocks, has an official “stay put policy” in case of fire, which stipulates that residents should stay in their homes unless there is fire in their flat. The reasoning is it allows firefighters better access to the stairs—but if the building is a tinderbox (as seems to be the case with Grenfell), the policy is tantamount to a death sentence.

Within half an hour, witnesses say the fire had consumed much of the building. In the end, over 200 fire fighters struggled to control the blaze. But it was sadly to little avail. The footage is appalling and the eye-witness accounts are worse. On the BBC and elsewhere, there were stories of trapped residents blinking their lights on and off for hours as a desperate signal to emergency services. There were countless tales of people trying to lower themselves out by crafting makeshift parachutes and ropes out of bed sheets. There were stories of parents throwing their children off balconies as their homes were consumed in flames. One baby was reportedly dropped off the tenth floor by a frantic mother and caught by a man on the ground.

Resident Samira Lamrani told The Daily Telegraph, “People were starting to appear at the windows, frantically banging and screaming … Us members of the public were reassuring them, telling them that we’ve phoned 999 but obviously the look on their faces was death. The more I looked up, floor upon floor. Endless numbers of people. Mainly the kids, because obviously their voices, with their high-pitched voices—that will remain with me for a long time. They were screaming for their lives.”

At Latymer Christian Centre just north of the scene, families of Grenfell residents, many wearing face masks because of smoke inhalation, hugged each other and wept. Others wandered through the crowd in their pyjamas looking dazed. One young woman could be overheard asking, “Have you seen my Nan? Have you seen my Nan?” People recognized each other and embraced. Others sat alone on the pavement, clearly in shock.

Local volunteers were handing out bottled water and platters of sandwiches. Inside, tables were heaped with clothing, food and toiletries donated by local residents. A woman rattling a bucket outside said she’d collected £1000 in cash in the last hour alone.

The Grenfell Tower was built in 1974 as part of the British capital’s vast social housing scheme. It comprises 170 flats and houses roughly 500 people. Despite a refurbishment last year, residents associations had warned the block constituted a serious fire risk. 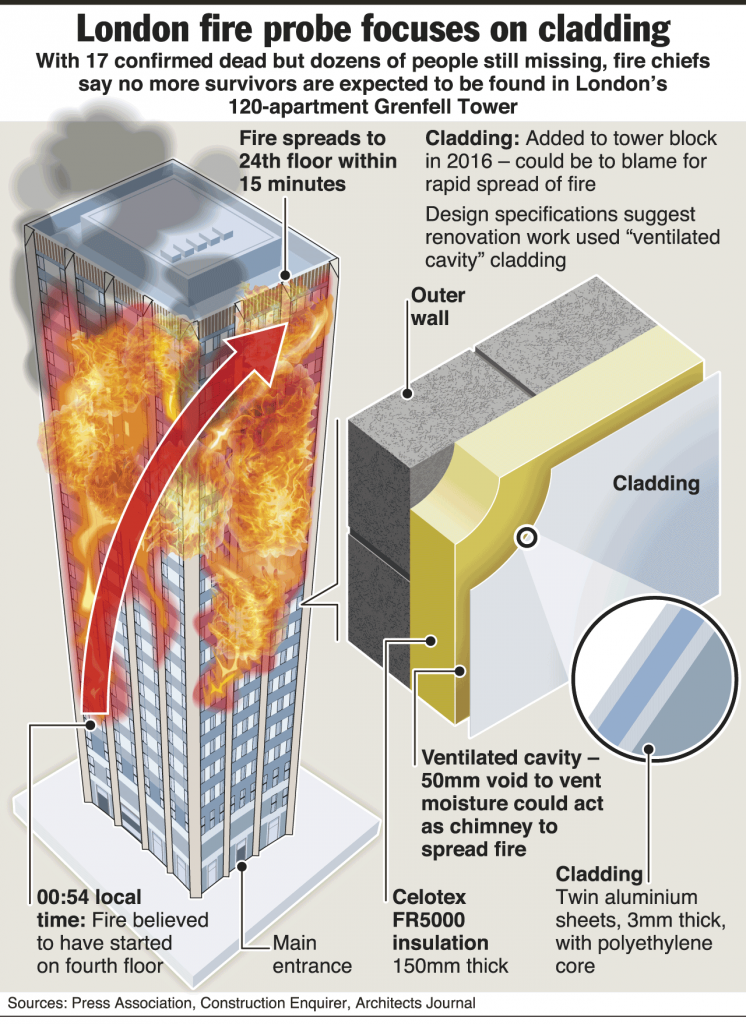 In a blog post published late last year, The Grenfell Action Group warned that they believed “only a catastrophic event will expose the ineptitude and incompetence of our landlord, the KCTMO, and bring an end to the dangerous living conditions and neglect of health and safety legislation that they inflict upon their tenants and leaseholders.”

While today North Kensington is widely known for the colourful multi-million-pound mansions of nearby Notting Hill and the fruit stalls of Portobello Market, the area is also home to some of London’s poorest residents, many of them new immigrants and most people of West Indian or North African heritage.

Royal Kensington and Chelsea, London’s richest borough, is home to most of the city’s billionaires, many of whom are not domiciled in the U.K. and as such pay minimal property tax and no tax on their worldwide income. The royal family, which owns several palaces in the borough, is also officially tax exempt.

Until last week, Kensington and Chelsea had been a Conservative stronghold but in what many regard as the most startling outcome of the recent election, Labour narrowly won the seat. The historic upset was viewed as the result of local residents voicing their dissatisfaction over Brexit, but there is another issue now at play here: The Tory government’s nearly decade-long policy of austerity and deep cuts to social spending and its effect on local authorities like the one that manages Grenfell Tower.

London as a city is no stranger to economic inequality, but the story of Grenfell is a particularly chilling one. The sense on the streets here in North Kensington is that something needs to change, and soon.

If there is a moral to the tragic tale of Grenfell Tower it would be this: If you want to keep your family safe in London, don’t be a poor immigrant living in a semi-derelict tower block in the middle of the city’s richest borough surrounded by billionaires and aristocrats who are essentially tax exempt.

It’s no fairy tale, but there it is.