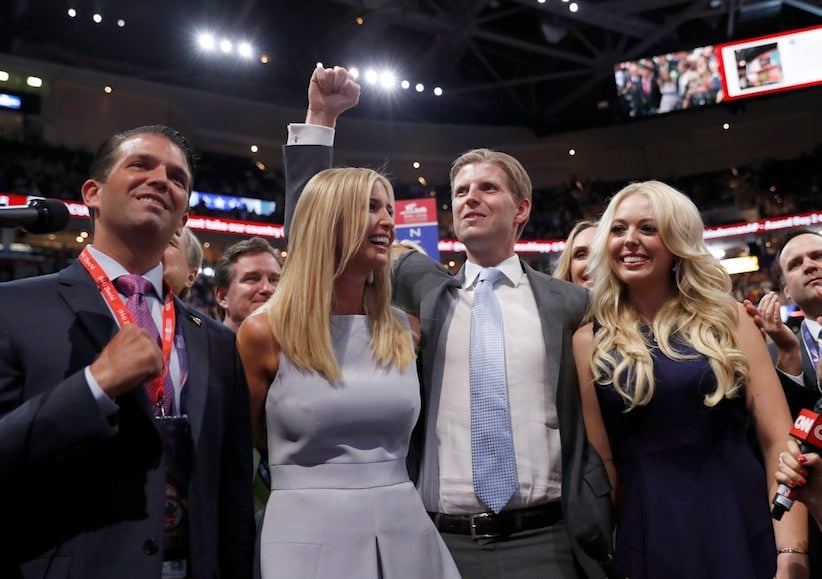 To this point, Tiffany has been relatively anonymous. (Trump once forgot to mention his daughter with Marla Maples during a victory speech.) Newly graduated from the University of Pennsylvania, she took the stage Tuesday night. She told the prime-time audience about the comments her dad left on her report cards as far back as kindergarten. “Contrary to what you might expect from someone who places an emphasis on results, my dad’s comments referred often to the sentiments expressed by my teachers about how I acted in and out of the classroom, just not even focusing on the letter grades,” she said. And with a look and voice that drew parallels to singer Miley Cyrus (Tiffany was once an aspiring musician but only ever released one song), she talked about how she enjoyed introducing her young friends to her dad, especially those with preconceived notions of what he would be like. “They meet a man with a natural charm and no façade.”

Though not as involved in the family business as her half-siblings, Tiffany’s Instagram feed often features the occasional party picture, earning her a place among the so-called “Rich Kids of Instagram,” a moniker Donald Jr. has worked hard to avoid.

The seemingly normal hard work ethic of Trump’s eldest children can be seen as a testament to his parenting skills. Donald Jr., now a married father of five, told the New York Times in 2006 that he tried his best to avoid  newspaper gossip pages. “Otherwise, I’m just Donald Trump’s son, some little rich kid running around,” he said.

On Tuesday night,  Donald Jr. played a starring role by not only casting the official New York vote to put his father over the top of the delegate count, but also with his 15-minute prime-time speech that had some commentators wondering if Donald Jr. has a future in politics, too.

Donald Jr. talked about immigrants who come into the United States following the rules, about cutting regulation for business, and about an American education system coddling teachers but not serving children. More important, he managed to humanize his father, a man who he says took on real estate developers to change the Manhattan skyline. If Chelsea Clinton is considered an asset for her mom’s presidential campaign, the Trump kids have revealed themselves equally ready to  tout their father’s grandparenting skills.

As what many could have expected with a Trump nomination, the day at the Republican convention was filled with oddities. The Trump campaign defended accusations of Melania Trump’s plagiarism with comparisons to My Little Pony quotes. Ben Carson invoked Lucifer. Chris Christie blamed Clinton for being a Boko Haram apologist when the extremist kidnapped school girls in Nigeria. And House Speaker Paul Ryan, one night after calling Trump “not my kind of conservative,” seemingly tried his best to avoid calling Trump by name in his 10-minute speech.

On the heels of Melania’s sorry outing, the Trumps’ win was a clutch. Two more days, three Trumps to come — including the would-be president.