Egyptians take to the streets to protest against Mubarak 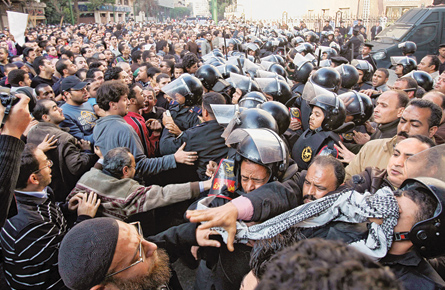 The radical political change sweeping Tunisia has led to speculation that it could spread to other countries in North Africa. And certainly, leaders in the region should be worried, if the massive street demonstrations that shook Egypt earlier this week are any indication. There, tens of thousands of protesters took to the streets on what was the country’s Police Day, in an unprecedented show of anger against the 30-year reign of President Hosni Mubarak, battling government forces and shouting: “Mubarak, your plane is waiting for you.”

A cursory look at Egypt does reveal a nation with many problems similar to Tunisia’s. Rising food prices, official corruption and an autocratic political system, which has facilitated the rule of the now ailing Mubarak, 82, have all sown the seeds of discontent in this country of 80 million. And for many Egyptians, the fall of Tunisian president Zine el-Abidine Ben Ali was a welcome sight. “Ben Ali was not a good man,” said Adel Shalaby, a Cairo taxi driver. “All Arab and Muslim people are happy that he’s gone.”

Shalaby, interviewed before Tuesday’s protests, was a little more circumspect on domestic matters. “I don’t think I want the same thing to happen in Egypt. We want a change in president—but not like in Tunisia.” And indeed, beaten down by years of autocratic rule, and lacking the visionary leadership that was so readily projected by the likes of former president Gamal Abdel Nasser, many Egyptians have been disillusioned, dispirited and bereft of real revolutionary zeal. Perhaps for that reason, the virulence of this week’s demonstrations caught many—even among those who took part—by surprise. “We have never seen anything like this before,” one protester told the Guardian.” “It is the first day of the Egyptian revolution.”

Can it continue? Even before the protests, Egyptian opposition figures were expressing optimism that their country would follow the Tunisian example. “A similar uprising will happen in Egypt,” insisted Dr. Mohammad Abdou, a member of the Egyptian opposition Wafd party. Others said that unrest would provide an opportunity for the outlawed but popular Muslim Brotherhood to act against the regime. “Assuming that what we read is correct, if there were fair and free elections today, the Muslim Brotherhood would win it outright,” says Yossi Mekelberg, an associate fellow of the Middle East and North Africa Programme at London’s Chatham House. “There is always the potential, then, that the more radical Muslim Brotherhood would try to organize something much more radical.”

Whether the groundswell of anger would continue, and how the regime would ultimately respond, was unclear as Maclean’s went to press on Tuesday. With a presidential election looming in September, Mubarak had been expected to run again. If nothing else, the anger on the streets earlier his week clearly showed the president that for many, Egypt’s status quo was no longer good enough.