The Umbrella Revolution: Broken but not over 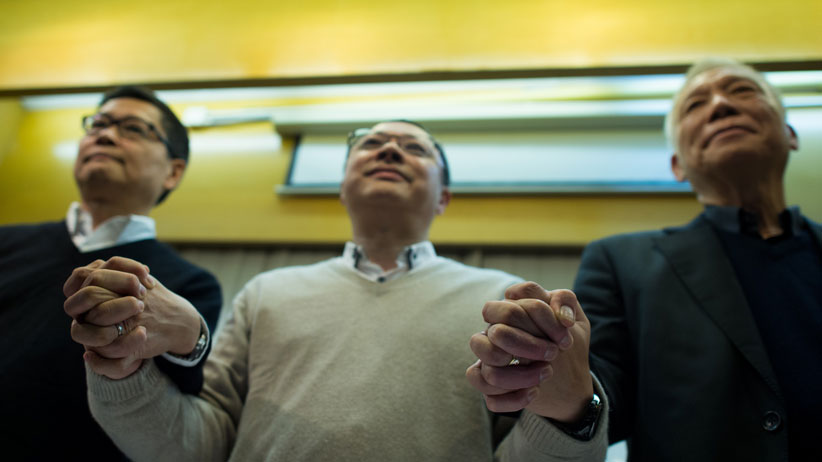 Hong Kong’s pro-democracy protesters appear to be sounding the retreat. Following a week of pitched battles with police, the student-driven movement that has snarled city streets since late September is fracturing. And its three older, spiritual leaders—a law professor, a Baptist minister and a sociologist—have signalled their intention to surrender to authorities.

In an open letter published on Tuesday, Benny Tai, Rev. Chu Yiu-Ming and Dr. Chan Kin-man said they plan to present themselves to the police on Wednesday and accept the full legal consequences of the protests they helped to inspire. “Surrendering to the police is not a sign of cowardice. It shows our courage to honour our commitment,” reads the communiqué. “It’s not a failure, but a complaint against the government’s indifference.”

The three also called upon the remaining protestors to abandon their camps around the main government building in the Admiralty district and along a major shopping thoroughfare in Causeway Bay. (Last week, police armed with a court injunction forcibly cleared out a third sit-in the Mong Kok neighbourhood.)

Related reading: Why the umbrella is a symbol of hope in Hong Kong

“For the sake of the occupiers’ safety, for the sake of our original intention of love and peace, as we prepare to surrender, we three urge students to retreat,” Tai later told a press conference. “When violence erupts, it is time to consider the transformation of the movement.”

The goal of the massive civil disobedience protests had been to force Chinese authorities to allow the full and open election of the former colony’s leader—known as the chief executive—in 2017. But, after more than nine weeks, public support—and government tolerance—for the disruptions is rapidly waning.

The final straw appears to have been a bold attempt on Sunday evening to expand the main protest zone and lay siege to the government office complex—home to both the offices of the chief executive and the elected legislative council—that sits along the city’s waterfront. Shortly after 9 p.m., a leader of the university students federation urged the crowd to march on the buildings and blockade all exits and entrances. Several hundred students, many wearing masks, goggles and hard hats as protection, heeded the call and tried to breach security cordons. The clashes went on for hours, with police beating back successive charges with water cannons, pepper spray and batons. In the end, 58 people, including 11 police officers, were sent to hospital with a range of injuries.

Related viewing: ‘Please’ and ‘thank you’ at the Umbrella Revolution

Afterward, student leaders gathered on a stage at the main protest site and bowed their heads in apology for both the violence and failure to secure their objectives. There was open dissension amongst their followers. The South China Morning Post reported that helmets and beer cans were thrown at the leadership group. “All you do is grab the stage and chant slogans. We’ve listened to this crap for more than 60 days,” screamed one masked protester. “If you don’t have the heart to go on, then leave.”

The current chief executive, C.Y. Leung—the main target of the protesters since the tear gas and umbrella clashes of late September—sounded emboldened by the schism. On Monday, he issued his bluntest warning yet, demanding that the demonstrations cease immediately. “Do not think the police are weak,” he told reporters. “The tolerance of people in Hong Kong has reached its limit.” Leung also threatened far-reaching consequences for those who do not leave voluntarily, saying they will be arrested, prosecuted and will end up with criminal records that will affect both their academic plans and future employment.

His words were backed up by a new court injunction, issued the same day, which provides police with the legal excuse to clear large swaths of the Central protest zone. The order, sought on commercial grounds by a bus company from mainland China, follows the same path as the successful efforts by Mong Kok entrepreneurs to end the sit-in in their neighbourhood. With public opinion polls now suggesting that more than two-thirds of Hong Kong residents would like to see the protests end, all the power seems to rest with the government.

Joshua Wong, the 18-year-old face of the movement and leader of the student group Scholarism, has launched a hunger strike in a desperate bid to shame authorities to the negotiating table. “I know it is really harmful to my body, however, it is the only way to give pressure to the government to get a meeting with us,” he told CNN.

But the ploy seems unlikely to succeed. The government has steadfastly refused to enter into talks for weeks now. And, as international attention has wandered, there is less and less pressure on them—or the Chinese leadership in Beijing—to forge a compromise.

The fight for full democracy in Hong Kong, which has already dragged on for more than a quarter-century, surely isn’t over. But this “hot” phase appears to be drawing to a conclusion.

“We can’t say the movement has failed. It’s a long struggle.” a tearful Dr. Chan Kin-man told reporters. “If we were naive, it was that we believed in [the Chinese promise of] ‘One country, two systems.’ “