The UN, where rights abusers get to be on the human rights council

Terry Glavin: The UNHRC is so rife with oppressors and torture states that it just might serve the opposite of its founding purpose 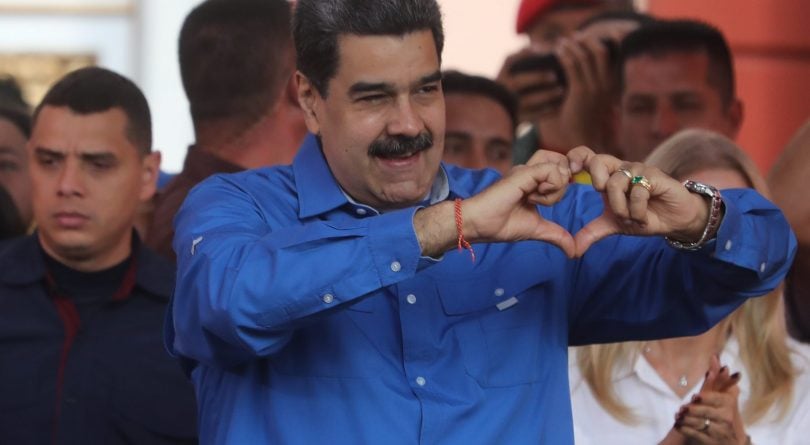 Venezuelan President Nicolas Maduro with supporters in Caracas. Venezuela has been named a member of teh UN Human Rights Council, despite the UN's own report that the Maduro regime engaged in orchestrated political assassinations (Miguel Gutiérrez/EPA)

It would be a sufficiently damning indictment of the United Nations that on the 75th anniversary of the global body’s founding, the state of international multilateralism is in utter disarray and mass murderers, war criminals and their torture states enjoy almost total impunity from the reach of international law. But it gets worse.

Headquartered in the pleasant surroundings of the Palais des Nations overlooking Lake Geneva in Switzerland, the UN Human Rights Council, which replaced the thoroughly discredited UN Commission on Human Rights 14 years ago, has become as comfortable and welcoming as its predecessor was for many of the worst human rights abusers on the face of the earth.

The 43rd session of the UNHRC is underway here this week. Among the council’s many dodgy members for 2020, for instance, are Pakistan, Libya, Qatar, Mauritania, Somalia, Sudan and Venezuela.

The Pakistani penal code provides for the death penalty to punish “blasphemers,” and Pakistan permits forced conversions. Only two months ago, a panel of the UNHRC’s own rapporteurs condemned Pakistan’s courts for a Dec. 21 death sentence handed down in the case of Bahauddin Zakariya University lecturer Junaid Hafeez, who has been in solitary confinement ever since he was charged with blasphemy in 2013. Only two weeks ago a Pakistani high court ruling validated the abduction and forced marriage of a 14-year-old Christian girl on the grounds that she’d already had her first period and was fair game.

Libya is a failed state, riven by proxy warfare. Abandoned by NATO after an Arab Spring rebellion overthrew dictator Moammar Gaddafi in 2011, the UN-recognized Government of National Accord, now backed by Turkish troops, is embroiled in a bloody contest with the Russian-backed warlord Khalifa Belqasim Haftar, formerly an officer in Gaddafi’s army. Qatar is globally notorious for its overwhelming reliance on brutally oppressed guest workers. Freedom of expression is practically non-existent, and along with Somalia and Sudan, Qatar enforces the death penalty for LGBTQ people.

And then there’s Venezuela. Last year, in just one of the conclusions of an investigation carried out by the UN’s own High Commissioner for Human Rights, the regime of Nicolas Maduro was found to have engaged in orchestrated political assassinations that contributed to nearly 7,000 deaths between January 2018 and May 2019 that the government in Caracas dismisses as “resistance to authority.”

The UNHRC is currently engaged in a fact-finding mission to inquire further into extrajudicial executions, enforced disappearances, arbitrary detentions and torture in the Bolivarian regime there, which has disgorged a fifth of the Venezuela’s population as refugees, so far. Earlier this week, the UN World Food Program released a report showing that a third of the remaining Venezuelans—9.3 million people—don’t have enough food to meet their minimum nutritional requirements.

And yet Venezuela was elected by the UN General Assembly to serve on the UNHRC this year.

RELATED: Trump dismisses United Nations as a club to ‘have a good time’

The UNHCR is certainly not alone among the UN’s institutions in the way it has degenerated to serve the opposite of its founding purposes. Sometimes it’s darkly comical. The UN has a “special committee on decolonization” headed by Bashar al-Jaafari, the UN’s ambassador from Syria. For nearly a decade, the Syria regime has been engaged in ethnic cleansing and displacement by barrel bombing of most of its Sunni Arab population. Nearly a million people have been driven out of Southern Idlib since Dec. 1, and they’re huddled in tents, or finding shelter in mosques, or surviving out in the open, near the Turkish border, in the coldest winter in five years.

The UN Office for the Coordination of Humanitarian Affairs reported Tuesday that its emergency budget for Syria is $371 million short of its immediate requirement of $500 million to support the displaced Syrians over the next six months. Meanwhile, the Russian air force continued its bombing of residential areas in Idlib and rural Aleppo this week. A delegation from the Syrian National Coalition has arrived in Geneva from Istanbul “to highlight the crimes Russia and the Assad regime are committing against civilians in Syria, especially in Idlib and rural Aleppo.” Nothing is expected to come of it.

The UN’s decline as champion of liberal values and human rights is due in roughly equal measure to the increasing isolationism of the United States, the muscle-flexing of Vladimir Putin’s Russia, the rising aggressiveness of the Peoples Republic of China and the obsequiousness of countries like Canada.

With its focus on placating China and securing enough votes to realize Prime Minister Justin Trudeau’s dream of a non-voting seat on the UN Security Council, Canada keeps its head down. An observer at the human rights council, Canada hasn’t been a member in several years.

The Trump administration withdrew from the UNHRC nearly two years ago, citing the parade of dictators that have turned the body into what Nikki Haley, then the U.S. ambassador to the UN, described as a “self-serving organization that makes a mockery of human rights.” Haley also cited, not unreasonably, the UNHRC’s singular obsession with Israel.

But the Americans are missed—at least by those human rights activists who still try to use the forum of the UNHRC as a means to sanction and hold to account the world’s most brazen human rights criminals.

It’s a wonder that any of them bother to come to Geneva at all.

RELATED: The NDP’s response to the Venezuela crisis has become an unfunny farce

The suffering of the Syrian people at the moment is as dire as it has been since a democratic reform movement sprang up in 2011. Syrian president Bashar Assad responded by destroying entire cities, resorting in dozens of cases to chemical weapons like sarin and chlorine gas. The UN Office for the Coordination of Humanitarian Affairs counts at least 560,000 children among the 948,000 Syrians driven north by Assad’s militias and the Russian air force since December.

“There should definitely be an urgent session on the situation in Idlib,” Neuer told me, “but the UNHRC just shrugs its shoulders. The council will not act with urgency on Syria.”

There is a slim chance of some movement on Venezuela, however. It took eight years of NGO lobbying for the Office of the UN High Commissioner for Human Rights to conduct its investigations last year, but the lobbying did produce some results. And UN Watch has managed to pull together a petition with more than 125,000 signatures calling for Venezuela’s dismissal from the council.

There are several ordinarily dependable member states on the council this year—Australia, Austria, the Czech Republic, Denmark, Germany, Japan, Mexico, the Netherlands, South Korea, and Ukraine, for instance. But these days, almost everyone is keeping their heads down.

Even the most outrageous human rights abuses get overlooked, and sometimes, the world’s worst human rights abusers receive praise here. Last year, China won accolades from more than 50 countries, many of them Muslim-majority states, for its “counterterrorism” initiative in Xinjiang, where more than a million Muslims have been interned without trial in re-education camps.

As for the democracies, they’re intimidated. “The Human Rights Council only really has the power of shame, but the democracies have stopped issuing resolutions,” Neuer told me. “They’ve been made timid by Russia, by China, and by Turkey, and they don’t want to be embarrassed if they put forward a resolution and it fails. It’s a nice life here. The ambassadors go skiing on the weekends. But they’re afraid.”