Why a new racial crisis has exploded, despite big gains under Barack Obama 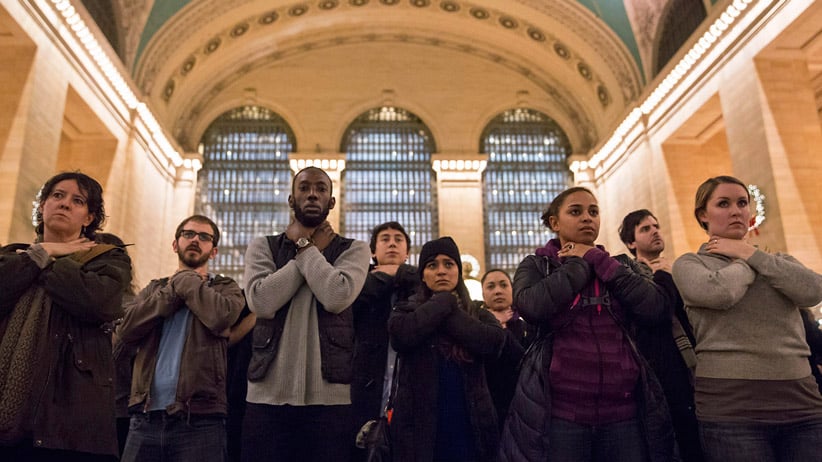 The deaths of unarmed, young African-American men in Missouri and New York City have plunged the U.S. into a period of racially tinged turmoil: demonstrations, “die-ins” and slogans of “hands up, don’t shoot” and “I can’t breathe.” Two federal civil rights investigations have been launched. A governor declared a state of emergency in anticipation of civil unrest last month. President Barack Obama took to national television asking for “peace and calm on the streets.” On the surface at least, America has not seemed so divided and tormented by race in many years.

It began in August with the killing of an unarmed teenager. Michael Brown was shot to death in Ferguson, Mo., in a now infamous, still-disputed confrontation with a police officer. Earlier, in July, Eric Garner died of a heart attack after being held in a chokehold by a New York police officer in Staten Island. Video showed him gasping to utter his last words, which have become a rallying cry: “I can’t breathe.” The fact that grand juries did not find sufficient evidence to lay charges in the first case divided black and white Americans. Fully 80 per cent of African-Americans, but only 23 per cent of whites, felt charges should have been laid against the officer who shot Michael Brown. In contrast to Ferguson, a majority of Americans said the police officer should have been charged in Garner’s death, according to a national survey by the Pew Research Center and USA Today this month. Former president George W. Bush called the death “very disturbing” and the failure to lay charges “hard to understand.”

The two cases jolted the country and have written the obituary for Obama’s “post-racial America,” even though that had always been a mirage. “It used to be folks would say, ‘Well, maybe blacks are exaggerating. Some of these situations aren’t what they describe,’ ” Obama told Black Entertainment Television on Monday. “What we’ve now seen on television—now for everybody to see—gives us the opportunity to finally have the conversation, that, you know, has been a long time coming.”

When the biracial President was elected, he spoke of uniting a white and black America. In March 2008, in his famous speech on race, Obama described himself as “the son of a black man from Kenya and a white woman from Kansas,” married to “a black American who carries within her the blood of slaves and slave owners—an inheritance we pass on to our two precious daughters.” He told whites that anger was rooted in real discrimination, but asked African-Americans to reject a “view that sees white racism as endemic.”

But his legacy on race six years later has not been a simple forward march toward reconciliation. A Bloomberg poll this month suggested that a majority of Americans—53 per cent—say race relations have gotten worse since Obama took office. On closer inspection, there have been victories and setbacks. The historic progress of a country half-built on slavery electing its first black president has crashed up against harsh realities: some economic, others judicial and political. The outpouring of public anger may not reflect a new low in race relations so much as the dashed hope that the country had left such incidents in its past.

Related reading:
The Editorial: It’s time for Obama to lead on race relations
The truth about race, the police and Ferguson

Meanwhile, as state and local budgets were squeezed by plunging revenues, public sector jobs were cut. African-Americans are 30 per cent more likely to be employed by the public sector, which accounts for more than one-fifth of black jobs. Minorities were also hardest hit by the real estate crisis, and blacks and Latinos were 70 per cent more likely than whites to lose their homes to foreclosure, according to Center for Responsible Lending.

Socio-economic setbacks are just part of the story. Civil rights have seen setbacks as well. In June 2013, the U.S. Supreme Court struck down a section of the Voting Rights Act of 1965 that required states with a history of racial discrimination to obtain approval from the federal government before changing election laws. Since then, more than a dozen Republican-controlled states implemented more restrictive voting laws, limiting times and places for voting or requiring specific forms of government-issued identification. Both steps made it harder for lower-income people who have inflexible work hours to vote. “Race discrimination is still very much alive. You may not see firehoses and dogs keeping you from the ballot box but there are other measures that have the intent or impact of keeping voters of colour from the ballot,” says Deborah Vagins, a civil rights attorney at the American Civil Liberties Union.

The Obama administration has, however, been fighting back: “They have done phenomenal work in the area of racial disparities in education, pay equity and civil rights enforcement,” says Vagins. Obama launched a program called “My Brother’s Keeper” aimed at nurturing African-American boys, as well as initiatives to reduce the high school dropout rate among African-Americans. His Department of Education also launched a $4.3-billion fund to reward states whose schools improve student outcomes and reduce racial gaps in school achievement.

In the area of law enforcement, the administration has focused on the high incarceration rates of African-Americans. In 2010, the U.S. Congress passed, and Obama signed into law, bipartisan legislation to reduce the huge sentencing disparity between crack cocaine and powder cocaine. The law also eliminated a mandatory five-year sentence for first-time possession of crack. According to the U.S. sentencing commission, African-Americans made up 80 per cent of those convicted of crack cocaine offences.

In 2013, Eric Holder, the first African-American attorney general (who is soon to be replaced by the first female African-American attorney general, Loretta Lynch, if the Senate confirms her) announced a new focus on reducing other sentencing disparities. Noting that black male offenders have received sentences nearly 20 per cent longer than those imposed on white males convicted of similar crimes, Holder said, “It isn’t just unacceptable—it is shameful.” This year, the U.S. sentencing commission voted to reduce the guidelines for drug offences and to make them retroactive, meaning that as many as 46,000 people in federal prison for non-violent drug offences could qualify for reductions—on average two years.

Sentencing reform is gaining bipartisan support in Congress among liberal Democrats and libertarian Republicans who are backing legislation that would cut mandatory penalties in half and give judges more latitude on sentencing. That is expected to start reducing the racial disparity in incarceration rates. “I think we’ll start to see modest declines in the next couple of years from changes on crack cocaine and mandatory minimums,” says Marc Mauer, executive director of the Sentencing Project, a research and advocacy group in Washington.

The administration has also entered into settlements that will overhaul procedures at police forces in some 20 cities where the Justice Department found officers to be acting recklessly or abusively. “This holds the potential for substantial change in day-to-day practices and hopefully cutting down the prospects that we’ll have more of these kinds of cases erupting,” says Mauer. In the wake of Ferguson, Obama also announced $263 million in funding to provide 50,000 body cameras to police around the country.

While polls indicate a wide gulf between how much African-Americans and whites trust police and what role they believe racism plays in police actions, there appears to be a waning tolerance for overt racism. Donald Sterling was forced by the NBA to sell the Los Angeles Clippers basketball team after recordings of his racist comments were made public. Bruce Levenson also said he’d sell his stake in the Atlanta Hawks after an email considered racist became public. NBA players, including LeBron James, this week have worn T-shirts with Garner’s last words, “I can’t breathe,” during warm-ups. And the demonstrations and die-ins that followed the deaths of Brown and Garner have drawn Americans of various backgrounds into the streets. “There is a shocking of the conscience that happens now when these things are reported,” notes Vagins. It will be helpful, she says, “as long as that shock is channelled into action and not apathy.”

Even Obama, the former community organizer, endorsed the protests as a valuable reminder to the country that there is work to do. “As long as they’re peaceful,” he told BET on Monday, “I think they’re necessary.”