The uprising in Iran: 'This is what revolution looks like'

Terry Glavin on how the ongoing protests are more than an economic revolt. Could the darkness that descended upon Iran in 1979 soon be lifted?

The Iranian uprising that began last Thursday in Mashhad, Iran’s second largest city, was initially reported as an isolated protest over food prices and unemployment. By Sunday, the entire country was heaving in convulsions. Tens of thousands of people had poured into the streets of at least two dozen Iranian cities and towns, upturning police vehicles and setting government offices ablaze. The Khomeinist regime has been shaken to its foundations. Hundreds of people have been arrested. At least 12 people are dead.

By Monday morning, state broadcasters were reporting that security forces had prevented armed protesters from seizing military bases and police stations. President Hassan Rouhani was threatening a crackdown, but the rebellion continues. Nothing quite like it has happened since the Khomeinists seized power from the decrepit Mohammad Reza Shah, the last ruler of the Pahlavi dynasty, in 1979.

Unlike the massive protests that erupted after Mahmoud Ahmedinejad came out on top in the sham presidential elections of 2009, the unrest this time around is not largely confined to Tehran, Iran’s capital. It’s coming from everywhere. And unlike the 1999 uprising, the tumult of the past four days is not a student revolt. It’s an eruption that has arisen from the Khomeinist heartlands. Even in Qom, the Shia holy city, throngs of protesters last Friday were shouting ‘Khamenei, leave the country.” Ayatollah Ali Khamenei is Iran’s doddering Supreme Leader. In Iran’s criminal code, disparaging Khamenei in that way is a crime punishable by death.

“I think you’re beginning to see the initial kernel of a revolution forming right now. If this thing is sustained over a period of time and the government tries to clamp down, but the numbers of protesters grow, I think at that point you’ve got a revolution on your hands,” Kaveh Sharooz, a Toronto lawyer, human rights activist and former senior policy adviser to Global Affairs Canada, told me over the weekend.

Sharooz served as prosecutor in the “Iran Tribunal,” an ad hoc initiative that assembled jurists and international law specialists at the Hague five years ago to assemble a case against senior Khomeinist officials on charges of crimes against humanity for the murder of roughly 20,000 Iranian leftists, intellectuals and minority leaders during the 1980s.

“You’ve got all the elements of a revolution now,” Shahrooz said. “You’ve got an oppressed population rising up and demanding justice—the wholesale discarding of a government—and that government is clamping down. That’s what a revolution looks like. There’s no magic to it. That’s what it is, and I think we’re beginning to see the early forms of it.”

Another thing that makes the current revolt different from 2009 is that the mass protests back then articulated aims that were solely reformist. Brutally crushed by Khamenei’s Islamic Revolutionary Guards Corps (IRGC) and its Basij militia, the 2009 protests revolved around charges of vote-rigging within a pantomime election process. The protesters took the lead from their failed “Green Movement” presidential candidates, Mir Hossein Mousavi and Mehdi Karroubi, both of whom are still under house arrest.

This time around, the uprising is leaderless, and freelance journalist Samira Mohyeddin, a prominent figure in Toronto’s Iranian diaspora, says that’s a good thing. “There isn’t a single person they can go after and put under house arrest. The regime is scared, and that’s what’s really interesting. You can tell they’re afraid the red lines are gone,” she told me. “People are saying ‘Death to the regime.’ They’re saying ‘Death to Hezbollah.’ They’re saying ‘No to Syria, No to Gaza, No to Yemen.’ Iran’s imperialist behaviour is being called into question. The chants are ‘We don’t want an Islamic Republic.’ Posters of Khamenei are being burned.

“It’s totally unprecedented. And most of this movement is not in Tehran. It’s in the slums and in the small towns. That’s where people are feeling the disparity. This is where the movement is really happening. These are people who have nothing to lose anymore.” 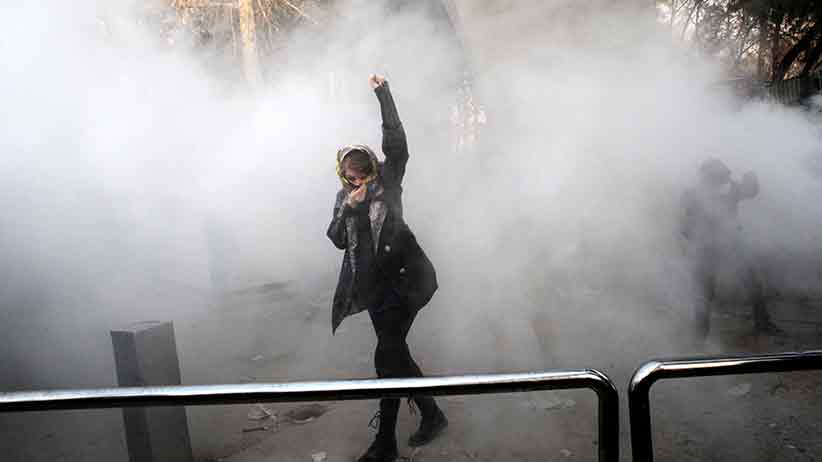 An Iranian woman raises her fist amid the smoke of tear gas at the University of Tehran during a protest on Dec. 30, 2017.(STR/AFP/Getty Images)

But the most surprising thing of all, Mohyeddin said, is that so many people seem to be surprised by the sudden ruptures. “It blows my mind that people will sit here and say, ‘Where is this coming from?’ How long do you think people will take this? How long do you expect people to take this kind of repression? It’s going to blow.”

Mohyeddin said the one thing that has surprised her is that the protests have grown and gathered steam. “I have to tell you, honestly, I thought it would have died down by today,” she told me Sunday evening. “But judging from what I’m seeing, and from what I’m hearing from friends in London and Beirut, it’s not stopping at all. They’re in contact, and people are out right now, tonight, and they’re doing things that I can’t even imagine, like setting a governor’s house on fire. They’re burning down some of the seminaries in Mashhad where the clerics study. If this isn’t a secular movement, I don’t know what is. They’re clearly saying, we don’t want an Islamic republic, whereas in 2009, nobody would say that. They wouldn’t dare.”

“Judging by the fact that they killed those protesters, I don’t think it’s going to stop. But I want to say, no matter what the outcome of these protests, the people of Iran have already won, because no longer does this regime have any legitimacy. Zero legitimacy. Because over and over again, people have said they don’t want an Islamic republic.”

Shahrooz agrees that the surprise expressed by observers in western countries is peculiar, and it’s odd too that so many news reports have characterized the rebellion as an “economic” protest that became “political.” In Iran, there’s no difference. “You can’t separate politics from economics. Bad politics leads to bad economic decision-making, which leads to poverty and all the misery you’re seeing in Iran.”

Besides, it’s practically impossible to protest against the Iranian regime’s handling of the economy without committing the crime of subversion, or even hirabah—“enmity against God”—owing to the economy being in large measure a possession of Ayatollah Khamenei’s untouchable IRGC and other entities controlled by Iran’s mullahs. Iran’s private sector constitutes about a quarter of the country’s gross domestic product. The rest of the economy is taken up by regime institutions and by the “semi-private” sector, which is dominated by the IRGC.

Neither should it come as any surprise that impoverished Iranians are raising slogans that directly target what Mohyeddin calls the regime’s imperialist behaviour. The IRGC’s Quds Force, listed as a terrorist entity by both Canada and the United States, takes the lead in arming and directing the forces of Bashar Assad’s regime in Syria, as well as the Lebanon-based Hezbollah terrorist group and Hamas in Gaza.

But the IRGC also controls most of Iran’s internet telecom bandwith, and its subsidiaries include major corporate entities in Iran’s oil and gas industry, the banking and insurance sector, and mining and construction. The IRGC owns soccer teams and hotels. The capital-flush Bonyad Taavon Sepah investment outfit is owned and run by IRGC commanders.

In the two years since U.S. President Barack Obama’s nuclear deal with Iran went into effect, Iran’s theocratic elites have gained access to roughly $100 billion in funds formerly frozen in escrow accounts by the UN’s nuclear-related sanctions. On top of that cash pile, the regime has already more than tripled its exports to Europe. The flooding of such enormous volumes of money into the ayatollahs’ bank accounts and the IRGC’s many budget portfolios has allowed Khamenei to shift his belligerent regional ambitions into hyperdrive.

Iranians have no way of subjecting corruption of this magnitude to any scrutiny. After the 2009 protests, what little remained of Iran’s independent news media was crushed. Foreign journalists were driven out of the country. The regime shut down the BBC’s Tehran bureau. Three years ago, the Washington Post‘s bureau chief was arrested on espionage charges. Twitter is banned. Facebook is banned. Over the weekend, the social media platform Telegram, which boasts an Iranian client base of 40 million people—half the country—was shut down.

The working-class Iranians who flocked to the polls to re-elect Hassan Rouhani last May on the promise of political reform and jobs have been obliged to stand idly and watch as the Khomeinist ruling class has devoured the post-sanctions windfall. It’s bad enough that Barack Obama turned his back on Iran’s courageous Green Movement in 2009 in exchange for the Khomeinists’ commitment to stick around at the nuclear bargaining table. Obama then doubled down by abandoning Syria’s revolutionary democrats to Assad’s barrel bombs, the IRGC’s bombardment of Aleppo, and Vladimir Putin’s air force—all to keep the nuclear talks on track, and all for an agreement that merely temporarily mothballs the Khomeinists’ plans to develop a nuclear weapons capability.

And now that Iranians are rising up again, what friends have they got?

“It’s shameful that the strongest message of support so far for the Iranian people has come from Donald Trump—somebody who himself has very little belief in liberal democracy,” Shahrooz said. “What I would have expected would be messages of support from people who do believe in liberal democracy, who do believe in the values that these protesters are fighting for. I would have expected this from the left, for one thing, and we’re not seeing that. I haven’t seen messages of solidarity from labour unions or any others. Our government has been largely silent.”

There was only a “very tepid statement” from Global Affairs Canada, to the effect that the Iranian government should allow its citizens to peacefully protest. That’s another thing that didn’t come as a surprise to either Mohyeddin or Shahrooz.

Sharooz himself was a longtime Liberal Party member who came within a handful of votes of winning the Liberal nomination in the suburban Toronto riding of Richmond Hill, but the contest went to the regime-friendly Majid Jowhari, who won the riding for the Liberals in the 2015 federal election. While Foreign Affairs Minister Chrystia Freeland has cooled the embarrassing fervour her predecessor Stephane Dion had cultivated for re-opening diplomatic relations with Tehran, Jowhari is the fulcrum of a powerful Iranian-Canadian business lobby that is chafing to do business with the Khomeinists.

As for what the future holds, this is where Sharooz and Mohyeddin part ways.

Mohyeddin is filled with optimism, convinced that the darkness that descended upon Iran in 1979 will soon be lifted, and that the Iranian people will not allow the regime to resort to the barbarism and genocide Bashar Assad has unleashed upon the Syrian people for their impudence in demanding democracy. “The regime would never dare do what Assad did,” she said. “They just wouldn’t dare.”

Sharooz said he wants to believe that, but he just can’t.

“This is not going to have a happy ending. I can’t imagine that. This is a regime that is not going to give up power without a fight. The moment that they feel their power is threatened they will unleash any violence that they can to maintain that hold on power. The ending to this story, whether it’s two years from now or five years from now, it’s going to be bloody.”