A threat to David Cameron

Nerdy and empathetic, Michael Gove could be the next Tory leader 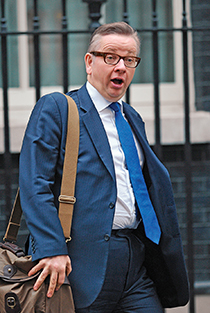 Last week at the Centre for Policy Studies in London, Education Secretary Michael Gove gave a speech that both defined him as a politician and fuelled speculation that he has his eye on the Tory leadership. Delivering the annual Keith Joseph Memorial Lecture, a speech that is traditionally given by the prime minister, Gove set out a broad and sweeping vision of a “compassionate Conservatism,” one that would produce “a society in which opportunity is more equal, the needs of the most vulnerable are our first priority and the greatest fulfillment any of us can have is in service to others.”

It’s a lovely sentiment, but do not mistake Michael Gove for touchy-feeling liberal. Despite his empathetic words and nerdy demeanour he is about as staunchly conservative as they come. A man who supports both the privatization of the National Health Service and the BBC and called for the invasion of Iraq just two days after 9/11, he has spent his time in cabinet radically reforming Britain’s state education system with his implementation of free schools (i.e. community-run, state-funded academies).

For months now in British political circles, Gove has been touted as a likely successor to David Cameron—a dark horse candidate, after the rather more polarizing mayor of London, Boris Johnson. And now that the sitting prime minister finds himself with a fractious party, heavily divided on the issue of Europe, it is looking less likely than ever that he will be around to lead the party to a majority in the next election. “David Cameron is heading for the exit. Enter Michael Gove,” a headline in the Guardian announced last week. The Telegraph took it one step further, declaring, “Michael Gove aims to be the heir to Tony Blair.” Gove is said to be an admirer of the former Labour prime minister who won three successive majorities and supported George W. Bush’s invasion of Iraq.

Last fall the Guardian ran a lengthy profile of Gove in which he was described by colleagues, opponents and political journalists alike as “an incredibly nice guy,” “the politest man in the House of Commons” and “very ironic and incredibly good at taking the piss out of himself . . . one of those people you hope will be at dinner.” The latter statement being, in British terms, the highest available praise on Earth.

By all accounts, Gove has a way with people—in his previous incarnation as a political editor at the Times of London, he is said to have charmed copy out of late-filing reporters by saying, “But how are you? Yes, of course, should you so wish to file that would be marvellous, that would be very much appreciated. But it’s first important that I know how you are.” Yet despite this velvet-gloved approach, he is also legendarily immovable in his views. A gifted debater at Oxford, which he attended during the same era as Boris Johnson, David Cameron and current Chancellor of the Exchequer George Osborne, Gove is said to be adept at the art of listening and appearing to take on board the liberal views of others while remaining utterly secure in his conservative convictions. Or as one journalist described his political style, “manners maketh the impression of a modernizer.” Think of him as a politician with the charm of Barack Obama and the balls of Stephen Harper. In other words, a natural.

The adopted son of a middle-class family in Aberdeen, Scotland, Gove’s humble background is often cited as the impetus for his vision of social mobility through education. His own schooling, however, was slightly more complicated than that. He attended his local public school until age 11 and then passed the entrance exam to Robert Gordon’s College, an exclusive Aberdeen private school. While his parents paid his fees until his senior year when his father’s business failed, Gove is often perceived as a scholarship boy—a man who succeeded in life in spite of the odds rather than because of them. While this is not entirely true, his background is certainly closer to the average British voter than wealthy, socially cosseted Old Etonians like Johnson, Cameron and Osborne.

After Oxford, Gove enjoyed a successful career as a journalist—he is married to the Times columnist Sarah Vine—and co-founded the Policy Exchange think tank with his university pal Osborne.

Earlier this month, Gove showed he is not afraid to cross the prime minister when he stated publicly that he would vote “no” in a British referendum on whether to stay part of the EU. “I am not happy with our position in the European Union but my preference is for a change in Britain’s relationship with the European Union,” he told the BBC. “Life outside would be perfectly tolerable, we could contemplate it, there would be certain advantages.” Defence Secretary Philip Hammond later echoed Gove’s position in a radio interview.

If David Cameron fails to bring his divided party together on the issue of Europe, and in turn, loses the next election, Michael Gove might just get his wish. Whether that wishlist includes being the next prime minister still remains to be seen. For now at least, he is far too polite—and politically savvy—to mention it.