The Vicar of Baghdad and the lost Christians of Iraq

For years, Reverend Canon Andrew White worked in Baghdad—until Islamic State forced him away from his flock

For Reverend Canon Andrew White, St. George’s Anglican Church, located in the heart of Iraq’s Red Zone, is the most wonderful church in the world. When he first laid eyes on it in 1998, it had been 14 years since anyone had worshipped inside, and it was in a state of disrepair; it was filthy and had been infested with pigeons. Only the stained-glass windows from 1936 that depicted British regimental crests remained in good condition. (They would be stolen years later during the 2003 invasion.) White had just arrived from England to begin his new appointment as vicar of Iraq’s only Anglican church, and he got right to work. Within a few years, he had restored the building, and by this summer, his congregation had grown to more than 1,200 Iraqi Christians.

Now, he has no idea how many of them are left. In the last several months, more than 100,000 Christians from across the country have fled from ISIS, also known as Islamic State, to the Kurdistan region and neighbouring countries.

Most of White’s congregation has sought refuge in Nineveh, the traditional homeland for Iraqi Christians. “But it was there that ISIS came to kill them,” White told Maclean’s. “Most of my staff have relocated there to provide their basic needs, their food, clothes, everything.” As president of the Foundation for Relief and Reconciliation in the Middle East, he carries out conflict resolution efforts in the region and provides humanitarian relief to refugees of any faith.

Iraq has always been a dangerous place for White, commonly known as the Vicar of Baghdad. Over his years there, he has been beaten, held at gunpoint, kidnapped, and held hostage in a room surrounded by rats and dismembered fingers and toes. It got to the point where he could travel only by armoured car, accompanied by as many as 35 security guards. But this summer, with the rise of Islamic State, the situation became almost unbearable. Much of his staff had left, the death threats against him became more frequent and severe, and Islamic State issued a $57-million bounty for him, dead or alive. On top of everything, White has lived with multiple sclerosis for more than 18 years.

“I’m so used to threats and dangers. It doesn’t worry me, though,” said White. “That’s what really worries the embassies and the security forces: the fact that I’m fearful about nothing and I’m not scared.”

But last month, the Archbishop of Canterbury, White’s boss, ordered him to leave Iraq for good. At first he didn’t take it seriously – he’s been asked to leave many times before. “It’s very unusual for me to be an obedient servant,” White said. His sense of humour – dry, unapologetic – comes across immediately. “But I finally realized that he was right. He told me that I was of more use alive than dead. It was one of the hardest things I’ve ever heard, but I had to leave.”

For the last few weeks, White has been travelling around North America, taking meetings and speaking to church groups. But he constantly stays in touch with his flock through phone calls and Facebook—and more often than not, the news on their end is devastating. “One of the first things I heard was that a young child who I had baptized as a baby was cut in half by ISIS,” he said. “His name was Andrew, after me. I can’t cope with the fact that our children, children I loved, are being massacred.”

For now, Sarah Ahmed, a 27-year-old Muslim dentist from Baghdad, will be White’s eyes and ears in Iraq. She met White in New York last year at a conference and he offered her a job. She’s since become the director of the foundation. Lately, she’s been travelling with her assistant to the refugee camps across northern Iraq to provide relief and counselling. In August, she got a call from a Christian man living in a camp with his family. “He told me to bring gasoline with me the next time I came and to pour it on them to set them on fire because dying is better than living like this,” she said. “I tried to comfort him, to tell him that I’m here for him.” It’s these moments that upset her most, but also motivate her to do more. “I feel that what I am doing is an example of what everybody in Iraq should also do,” she said.

Like White, Ahmed too faces threats of kidnapping and death on a regular basis. Extremists hate the work she is doing, especially because she’s a Muslim. “Friends tell me that I should take off my headscarf while I’m working in the camps, they are worried that Christians and other religions will see me as a threat,” she said. “But this never happens. They know I’m not the threat and that ISIS doesn’t represent Islam.”

White frequently asks Ahmed whether she’s Sunni or Shia. “But I’ve never told him; nobody knows,” she said. “I define myself as just Muslim. I don’t like to contribute to these divisions.”

Many of White’s parishioners have ended up in Jordan, where he can meet with them in relative safety. He and Ahmed are starting a new centre there that will provide health and education services as well as a new church.

Last week, White stood up to speak to packed pews at St. Paul’s Anglican church in Toronto. He began by praying in Aramaic: “If it’s good enough for Jesus, it’s good enough for me.” He reminded the congregation that Iraq is the most mentioned place in the Bible–then known as Mesopotamia. When God made the world, he likely created it in Iraq, he said.

“If I was to say I would never go back, I don’t know how I would survive. The moment I’m given my first opportunity, I will be there,” he said. “Yes, I foresee that happening.” 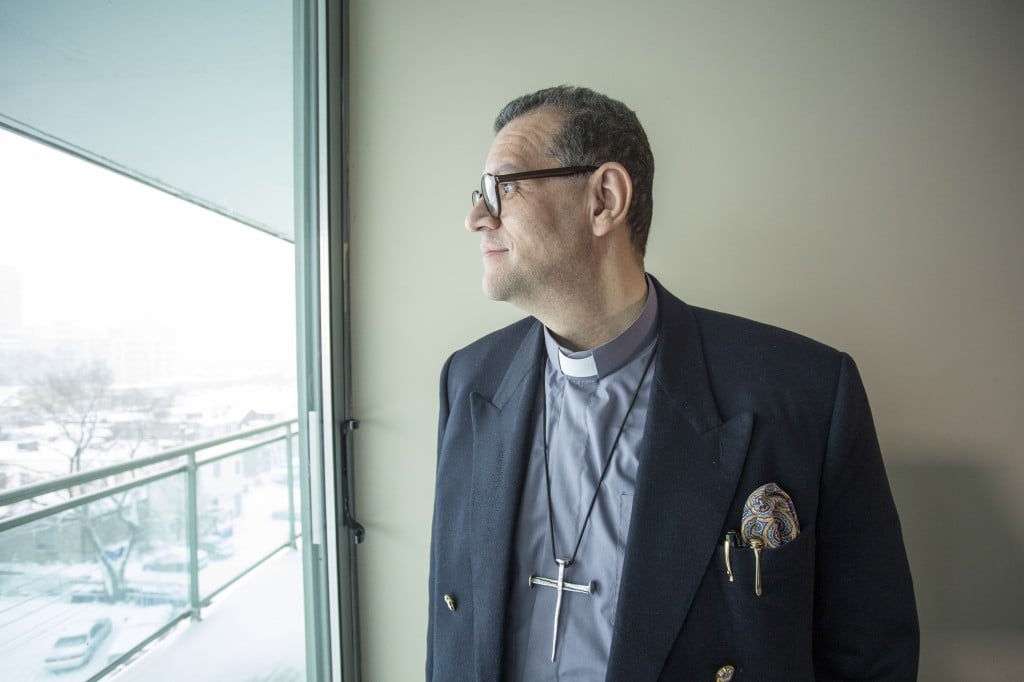