The view from Wallonia and its backlash against CETA

On the ground in the capital city of Namur, Wallonians reflect on the region's economic decline and why it blocked the CETA trade agreement with Canada 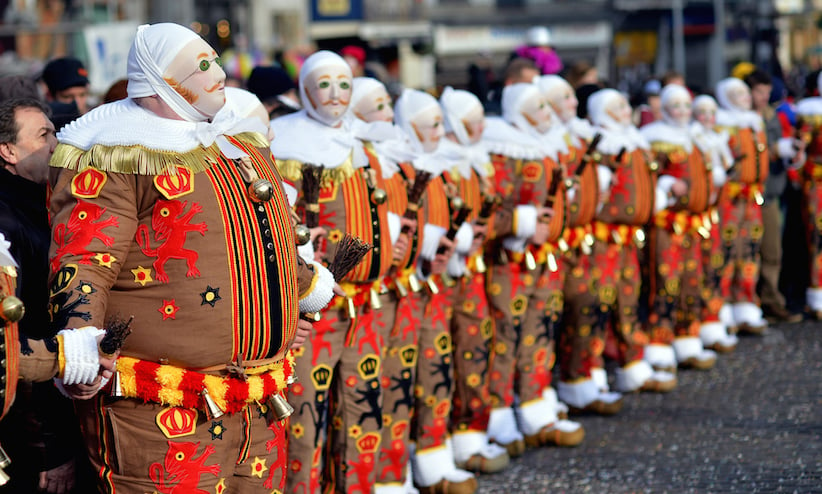 ”Gilles” in traditional costumes stand during the carnival in Binche, one of the most ancient and representative tradition of Wallonia (Eric Lalmand/AGP/Getty Images)

On Thursday, a minor landslide happened in Wallonia’s capital city of Namur. Part of a stone wall looping the prominent hilltop, centuries-old Citadel van Namen caved in, debris crashing down 10 metres to the Notre Dame Street below, a quiet walkway adjacent to Wallonia’s parliament. While no one was injured, a group of Wallonians gathered to observe the aftermath. “It is strange,” says one passerby. “We do not see this every day.”

It wasn’t the only strange occurrence in the Belgian region of 3.5 million, which shocked the world earlier this week when, at the last minute, it refused to approve the Comprehensive Economic and Trade Agreement, or CETA, a major trade pact between the European Union and Canada. Over the course of the week, until Wallonia’s parliament voted to accept a slightly modified version of the deal on Friday, the world’s attention suddenly turned to the tiny region. As Wallonia’s Socialist Premier Paul Magnette noted after the vote: “With this saga, which I must say made some noise, everybody in Europe knows the Walloon parliament exists.”

And now everybody in Canada, too, even if most don’t understand exactly what spurred Wallonia’s lonely revolt against the trade deal.

On the streets of Namur, Wallonians describe a region that’s unique from the rest of Belgium, though they sometimes have trouble qualifying how. “For the Flemish you have to own your own house,” Simon Weckx, a trainee, says after much thought. In Wallonia, he added, that isn’t as culturally necessary.

Sitting inside parliament on Thursday, an orange-stone building dwarfed by the citadel, Olga Zrihen, a deputy for the ruling Socialist Party, had just seen the amendments made to CETA in order to win over the Wallonians, and envisioned the positive vote result to come. “We do not always trust so easy, so we just want to make sure we all understand what is being said in the text,” Zrihen says. Listening to her, it becomes clear some of the opposition to CETA was rooted in regional political frustrations. “We are fed up all the time with people asking for solutions to their problems and the only answer we have is ‘It’s Brussels.’ You have this feeling of being totally powerless which is not good.”

Yet alongside this political resentment lies anger over the region’s declining fortunes: Wallonia, once the wealthiest part of Belgium, is now its poorest. One of the region’s biggest employers is GlaxoSmithKline, based roughly 40 km from Namur. Many residents fear the company will follow in the steps of U.S. heavy equipment maker Caterpillar, which recently announced it will close its plant in Wallonia, putting 2,000 people out of work. “Wallonia was, in the past, a very rich industrialized part of Belgium, with steel industry and coal-mining industries, but of course this is no longer the best products for industrialization,” Zrihen says. “We are in a difficult state.”

Inside Wallonia’s parliament three flags hang: the EU flag, the Belgian flag, and the flag of Wallonia, a “bold” red rooster on a yellow background. The Walloon government has only had the power to decide on international trade treaties for two years, Zrihen points out. While the government is socialist, Zrihen bemoans how its stand against the original CETA agreement has made it feel “despised” by other parts of Europe: “Does it mean when you are careful about the impact of decisions on the everyday life of people that is not good?”

Reflecting on the country that Wallonians and the rest of Europe will be trading more with, Zrihen says she considers Canadians to be closer to Europeans than to Americans. “I think Canadians are our best friends, but it is not a question of friendship … In Europe we want the welfare, we want the well-being of our citizens. It is why we built Europe.”

Outside parliament, police put up metal barriers ahead of a last minute anti-CETA protest. Using restrained hand gestures, an officer indicates that the demonstrators will likely be consuming alcohol. “That’s them stereotyping,” laughs Zrihen. But beer there is—and lots of it. Brands included Saxo, Fameuse, Troublette, Caracole, and Forestine—all produced in Wallonia. Jolly rain-coated women stand behind a table loaded with locally produced cheese and salami. “Isn’t it delicious,” one comments. They say they’re worried that CETA will affect their business. “Our health is not for sale,” states a large banner.

Namur-born scriptwriter Anne Fournier, 52, is adamant in her opinion of CETA. “It’s s–t. Bloody s–t. We don’t like it, we don’t want it. It’s anti-democratic. It’s putting business above the people.” Another protester, recent political science graduate Emily Burns, 26, agrees. “It’s the dictatorship of multinationals, and citizens can’t say anything. People with a lot of money having even more money and even more profit.” Still, she stresses: “We like Canadian workers. We have a problem with the multinational companies.”

A few miles away from the demonstration, another type of meeting gets started. The group, called Incubhacker, is made up of around 20 regulars who gather weekly to advance their tech skills. Christophe Chaudy, who works for a local technology company which employs around 80 people, is building a robot that could both fight and “fire with lasers.” He repeats a common refrain: “Forty years ago Wallonia was a rich and prosperous region. Then they missed the switch, they didn’t see it might not last forever… Now you have some problems closing the gap.” Initiatives like Incubhacker are encouraging, he say, but the region lags decades behind other hubs across Europe.

However, Chaudy sees a silver lining in more open markets. “When people start trading and talking they stop fighting,” he says. “If you want a world that’s peaceful you need globalization.”