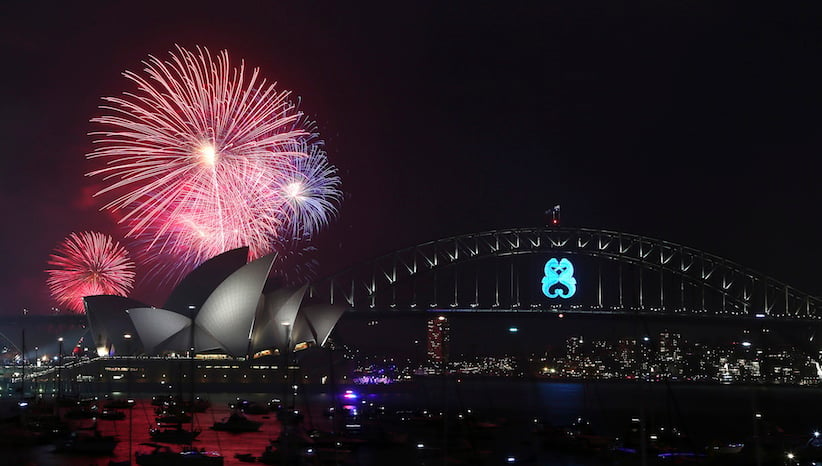 After a turbulent year marred by terror woes, Ebola outbreaks and a horrific series of airline disasters, many could be forgiven for saying good riddance to 2014 and gratefully ringing in a new year.

Across the globe, revelers looking for a respite from the gloom will converge on the beaches of Brazil, the shores of Sydney harbour and the potentially snowy streets of Las Vegas (yes, really) to welcome 2015. Here’s a look at how the world is celebrating:

First up: Down Under

Sydney takes pride in being one of the first major cities in the world to welcome each new year, and it plans to greet 2015 in its trademark glittery fashion – with a tropical-style fireworks display featuring shimmering gold and silver palm tree pyrotechnic effects.

More than 1.5 million revelers are expected to crowd along the shores of the city’s famed harbour to watch the vivid eruption of light over the Harbour Bridge, Opera House and other points along the water.

The festivities, however, come just two weeks after an Iranian-born, self-styled cleric took 18 people hostage inside a downtown cafe. A tribute to two hostages killed in the siege will be displayed on the pylons of the Harbour Bridge during the fireworks display, and an extra 3,000 police officers will be patrolling the city. Still, Sydneysiders are being encouraged to celebrate as usual.

In New Zealand, a giant clock on Auckland’s landmark Sky Tower structure will count down the minutes until the New Year, with a huge fireworks display launching from the tower at midnight. The capital, Wellington, will host a family-friendly celebration in a park, featuring orchestra music and iconic movie clips, culminating in a fireworks display. Midnight in New Zealand is 1100 GMT.

The loss of AirAsia Flight 8501 and a deadly landslide in Central Java are recent tragedies that have muted celebration plans in the Indonesian capital Jakarta. City Governor Basuki Tjahaja Purnama said the city would conduct prayers for the victims of the tragedies as well as host the annual Jakarta Night Festival.

Other Indonesian cities have opted to cancel or tone down their celebrations. Surabaya’s Mayor Tri Rismaharini banned any kind of New Year entertainment in Indonesia’s second-largest city, where most of the 162 people on the AirAsia flight that crashed Sunday were from.

Acting National Police Chief Leonardo Espina has warned that police in the Philippines who fire their guns during normally raucous celebrations will lose their jobs. Thunderous fireworks and gunfire normally leave communities shrouded in smog and gun smoke, and result in hundreds of injuries every year, including even deaths, some due to stray bullets. Since the New Year celebration began Dec. 21 more than 160 people have been injured.

Beijing will count down the New Year at an event in the Olympic Park designed to highlight the capital’s bid to host the 2022 Winter Olympics. Skaters will perform and Olympic medallist figure skater Zhao Hongbo, Paralympics gold medallist swimmer Yang Yang and pianist Lang Lang will appear. Celebrations will also take place in Zhangjiakou, the city in neighbouring Hebei province which is co-hosting the bid, and at the foot of part of the Great Wall in the northwest of Beijing.

Japanese stores generally close for New Year’s Day, the country’s biggest traditional holiday, so Wednesday was a day for shopping and stocking up for many, in preparation for the annual feast, called “osechi ryori.”

At midnight, temple bells will strike 108 times, the number of evils, or temptations, as defined by Buddhism. There will be fireworks and bonfires around the nation as millions of people flock to neighbourhood temples and shrines to pray for health and happiness.

More than 1 million people are expected to flock to the golden sands of Rio de Janeiro’s Copacabana beach, where two dozen artists and DJs will perform on three stages. Tourists and locals routinely party until dawn on the beach, staying awake to watch the tropical sun rise for the first time in 2015.

A massive fireworks display blasted from boats in the waters of the Atlantic Ocean will light the sky over the crowd, which traditionally dresses in all white, a Brazilian New Year tradition to bring purification and a peaceful year. Another tradition calls for partygoers to enter the sea up to their knees and jump over seven waves shortly after the New Year begins, for luck.

Watching the ball – or the pinecone or pasty – drop

New York will drop its Waterford crystal ball at midnight, in a tradition being increasingly copied across the United States with twists celebrating local icons. Las Cruces, New Mexico, is spicing up New Year’s Eve with its first chili drop. In Miami, a 10-meter (35-foot) neon orange will light up, while Atlanta and Nashville, Tennessee, will drop a peach and a musical note, respectively.

Flagstaff, Arizona, celebrates with a 2-meter pine cone that drops from a downtown hotel. Nearby Prescott drops a 2-meter (6-foot) spurred cowboy boot in a nod to its western culture.

On Lake Erie in Port Clinton, Ohio, the community will carry on its tradition of dropping a 270 kilogram walleye made of wood and fiberglass. Michigan’s Upper Peninsula will ring in 2015 with a nod to its mining history, with a replica of a pasty, a baked pastry filled with meat and potatoes – to drop in Escanaba, one of the remote region’s largest cities. The meal was popular by miners who immigrated to Michigan decades ago.

Amid the celebration, some cities are on alert for New Year’s Eve protests related to recent police killings of unarmed black men. Boston’s mayor and police commissioner urged activists to hold off on a planned “die-in.” No plans for major protests were announced in New York, where the police department is still mourning two officers shot to death in a patrol car. But security will be tight, with more personnel than usual.

Snow in Sin City: what are the odds?

Las Vegas isn’t a place that expects snow, no less on New Year’s Eve. So with meteorologists at the National Weather Service saying there’s a chance that flurries might fall on the gambling capital’s Strip and the hundreds of thousands of revelers ringing in the New Year, the agency warned visitors: dress warmly and wear comfortable shoes – it’s going to be a cold night.

Organizers of the fireworks display say the show will go on, with or without snow. Forecasts in Las Vegas pin the area’s chances for New Year’s Eve snow at 70 per cent along with a 0 degree Celsius low. But for that to happen, meteorologist Chris Stachelski says there needs to be moisture in the air, and that’s far from a certainty for the Strip.