There's a fix for flooding in cities, but you're not going to like it

Some cities are imposing fees that force all property owners to help pay for, and even prevent, stormwater runoff from their land 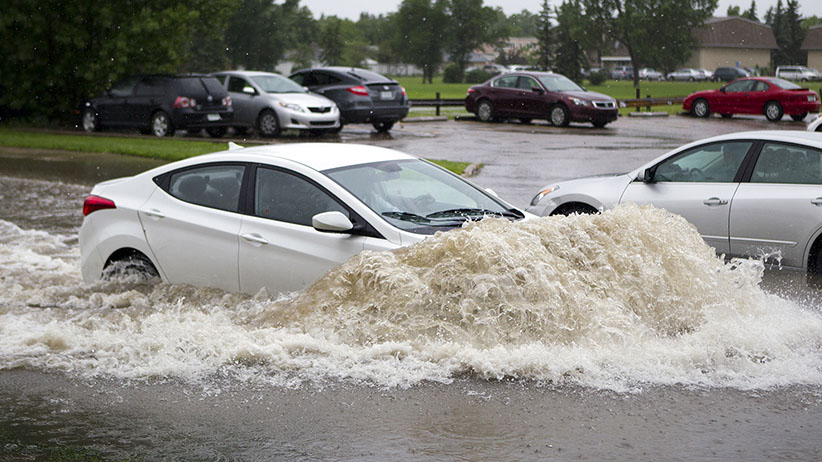 When the waters started rising on Aug. 5, Brian Knighten was making a nacho run.

The owner of the Broad Theater in New Orleans—his car loaded with boxes of chips—criss-crossed the increasingly flooding streets until he found a way to access his cinema.

Already, the water was flowing in. Which, for the Broad, isn’t entirely usual. The theatre is among some of the lowest elevation in the city, a spot that floods sporadically despite New Orleans’ intricate pumping system, while houses and businesses sitting on raised elevation stay consistently high and dry.

Knighten, who’d already dealt with eight inches of flooding just two weeks earlier, expected much of the same. But by the end of it, three feet of water trapped movie-goers for a full 12 hours.

In New Orleans—the sinking-and-already-below-sea-level, flood-prone city still living with the echo of Hurricane Katrina—one might expect a progressive stance on flooding prevention. Instead, critics say it’s behind many other North American cities in one key way: Its capacity to absorb rainwater where it lands.

In Houston, a neighbouring Gulf Coast city, the urgency of dealing with this seemingly simple issue was underlined in the wake of Hurricane Harvey. Rapid urban expansion has been blamed for destroying prairie land and green space that might otherwise have soaked up some of the rising waters.

Cities in Canada are not immune, either. Canadian local governments have long underfunded stormwater infrastructure to the tune of $31 billion, according to one 2007 study from the Federation of Canadian Municipalities. A 2016 Monk School of Global Affairs paper blamed three culprits for the catastrophic shortfall: increased urbanization and paving of green space, a lack of funding and political will, and climate change.

As the number and severity of floods—already the most costly weather event—grow globally thanks to our warming climate, it’s low-lying homes and business that stand to lose the most from stormwater runoff. Which raises the question: Should only low lying homes and businesses, which often correlate to poorer neighbourhoods, have to pay the cost?

Nathan Lott, director of the Water Collaborative of Greater New Orleans, says the answer is a resounding no. He’s part of a group of activists pushing for the city to adopt what’s already in place in Austin, Tex., Portland, Ore., and Canadian cities including Victoria, Kitchener and Mississauga (following 2013’s disastrous floods): A stormwater utility, or drainage fee that forces all property owners to help pay for, and even prevent, the stormwater runoff from their individual property, especially those on high ground. “It’s really all about equity, fairness, and neighbourliness in the city,” said Lott.

READ: It’s time we stopped paying for your river view

“You want to absorb rain water higher in the watershed,” Lott explains, “and some sort of incentive to adjust my behaviour at the top of the hill is what’s lacking.”

Most often, each property is assessed an annual fee (it could be as little as $45, or as much as a few hundred), based on the percentage of impermeable surface that covers the property (think roofs and driveways). A small house with a big yard, then, would incur less than an asphalt parking lot.

Some cities might offer discounts, grants or loans for residents or business owners who make their land more water-absorbent, often called green infrastructure. That could include permeable pavements or gravel, which allows water to soak into the ground, hanging rain barrels under gutters and reusing the water, or, as Jamelyn Austin Trucks has done, installing a bioswale, a.k.a her “pretty ditch.”

What was once a mud pit on the edges of her corner-lot home in Uptown New Orleans has become a garden filled with water-loving iris, muhly grass and itea. Neighbours’ cars are no longer getting stuck. The bioswale has been local a hit, but when Austin Trucks, an executive committee member for the Water Collaborative, looks around at ongoing renovations in her neighbourhood, she sees people pouring the same old slabs of concrete, and “it drives me insane.”

Even in Kitchener, where the stormwater utility has been billing since 2011, only seven per cent of residents have undertaken green infrastructure efforts, said Nick Golan, the utility’s manager. The average detached home is only paying about $12.50 a month, so there’s not as much incentive to reduce the fee, which can be cut up to 45 per cent by collecting and storing more rainwater on site, he said.

Still, those modest fees will fund a 2020 plan to offer significant city-funded discounts via landscapers, pavers and contractors for property owners who choose to build stormwater-catching features into their renovations.

Austin Trucks worries most New Orleanians are already too distrustful of city politicians to accept another fee, fed up with recent rising crime rates and widespread failure of the city’s unique pumping system, which exacerbated the Aug. 5 floods.

READ: Floodplain living isn’t a luxury. It’s a reality we have to deal with.

Even Knighten—who’s still recovering after last month’s flooding and has plans to build a wall around the cinema to keep the water at bay—isn’t convinced that New Orleans needs a stormwater utility. Maybe it would help, he said, “but at the same time we are currently so heavily taxed and the city is always implementing new fees.”

“In the day to day of operating a business, I don’t have time to think about if all my neighbours put in rain barrels, how would that help me.”

Even if the utility is implemented, the question shifts to the one that’s plagued Kitchener: How do you get people to change their behaviour?

So the answer, unfortunately, may be: More floods.