These refugees made it. But they're still being left behind.

They fled the Middle East and arrived in Turkey. But now, only the poorest refugees remain there—and they're full of misplaced hope that help is coming 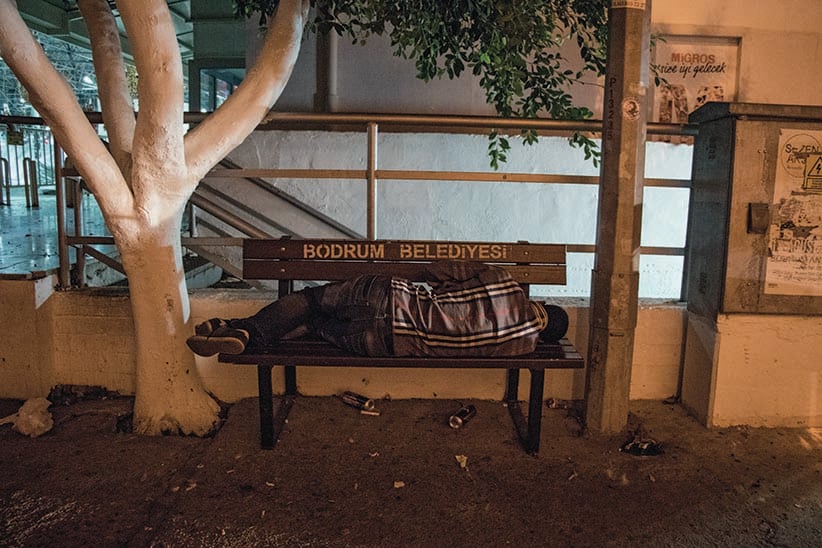 On Sept. 4, two days after the body of Alan Kurdi was found washed up on a beach in southern Turkey, something unexpected happened in Bodrum. In the early hours of that morning, while European vacationers slept and television crews packed their bags to follow the refugee crisis unfolding in Europe, Turkish police swept through the resort city’s streets and parks, clearing away the thousands of refugees sleeping there. The operation was so swift that locals were bewildered: “One minute they were here and the next they were gone,” a taxi driver told Maclean’s.

Where they were taken remains a mystery. Some say they were simply deposited in Izmir, 240 km up the coast. Others say they were scattered around multiple cities throughout Turkey. The police are not talking. Other refugees describe the missing as the poorest of the poor, those with little hope of paying the steep prices smugglers are charging—as much as $3,000 per head—to make the short crossing to Greece.

Those who have managed to reach Europe are the relatively well-off families who, in many cases, have used their life savings to escape. Those left behind, meanwhile, are the truly destitute—the ones most in need of shelter and protection and the ones least likely to receive it.

That reality is only now beginning to set in, even as Europe struggles with the small fraction of refugees who have crossed into its territory. According to the United Nations High Commissioner for Refugees (UNHCR), 4.1 million Syrians have fled their country. Nearly half of them are in Turkey, where the journey across the sea to Greece begins. Of those, only 195,000 have made the trip, around 10 per cent of the total. Countless more are still trying, along with other refugees from Iraq, toiling in low-paying jobs in Turkey’s industrial cities or begging on the streets, or both, in a desperate attempt to make enough money to get out.

There is, for instance, Samer, the 40-year-old father who arrived in Turkey from Idlib, one of Syria’s most dangerous regions, with his 15-year old son, Faiz. Samer’s home was destroyed in the ﬁghting between Syrian regime forces and the al-Qaeda-aligned Jabhat al Nusra, but he managed to save a few of his belongings, which he then sold to make enough money to send his son to Europe.

“I could only collect enough money for one seat on the boat,” he says. “I decided to send my son because if our young people stay in Syria, they will go one of two ways: they will join the Islamic State or they will join the opposition. They will become part of the violence and the violence will become a part of them. These young people need education. They need peace so they can develop into peaceful people.”

Related: Our primer on Syrian refugees, one of the election’s big issues

Then there is the tragic story of Rahad Kamil and his wife, Afra: two Iraqis and their four children. Rahad was an officer in the Iraqi army posted in Mosul, one of the many officers who stripped off his uniform when Islamic State overran the city in June 2014. In the process, he became a deserter in the eyes of the Iraqi government and a collaborator in the eyes of Islamic State. Feeling the danger from all sides, he escaped to Turkey in August 2014, where the family survived on the little savings they brought with them while Rahad worked odd jobs to make enough money for the illegal crossing to Greece.

“It was such a difficult time,” he says. “When I found work, I was paid next to nothing so I was only able to make the money for one person to cross. I even used some of our savings to make up the difference. I thought I would be able to come to Europe and then bring my family.”

But the plan hasn’t worked out. Rahad made it to Germany last April and since then has been trying to get the official documentation to bring his family across legally. The process, however, has stalled. Syrians who were with him on the crossing received their official papers within a month or two, he says, but he has been waiting nearly half a year with little progress.

“The German government is very worried about Iraqis and their potential ties to Islamic State,” says one German official, requesting anonymity because he is not authorized to speak to the media. “Investigations into their past go very deep and take a lot of time.”

Rahad’s wife, Afra, and their children have given up hope in the official family reunification process. On Sept. 1, the same night Abdullah Kurdi lost his wife and his two young boys in their failed attempt to cross the Aegean, a desperate Afra gathered up her children and made a go of it herself, using the last of her savings to pay off the smugglers. That attempt failed; the flimsy boat they were in deflated shortly after it left the shore. Afra and her children were lucky: the quick-thinking smuggler driving the boat steered them to a nearby island in Turkish waters where they were picked up by the coast guard and deposited back in Bodrum.

A week later, they tried the trip again but were caught by Turkish authorities.

Now the family is broke. “I’ve told them to go back to Ankara and wait for the German government to allow us to reunite,” Rahad says, referring to the Turkish capital. “I don’t know how they will survive there but what other choice do they have?” 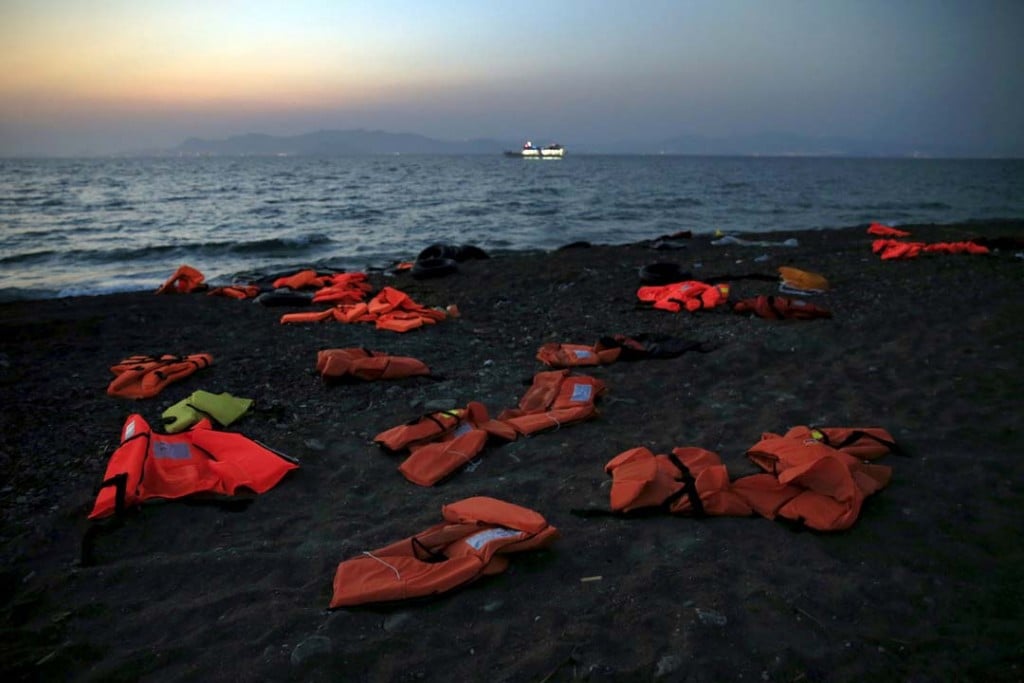 As heart-wrenching as these stories are, even worse off are the desperately poor still living on the streets of Bodrum. Some of those who were removed by the police have managed to return, re-occupying their tiny squares of concrete along the city’s tree-lined streets. Hundreds more, hoping the triumphant scenes in Europe mean help is coming, have joined them.

What they face, however, is more heartbreak. The flicker of hope ignited by the death of Alan Kurdi seems to be fading against a backdrop of fear and suspicion. On Sept. 15, Hungary, a key transit point on the migrant trail to Europe’s richer countries, declared a state of emergency and sealed its borders to refugees, arresting those attempting to enter illegally. A day earlier, European Union leaders had met in Brussels to discuss the crisis but failed to reach an agreement that would distribute refugees equitably between member states.

Many refugees have taken heart in Europe’s apparent loosening of its border controls, at least in countries like Austria and Germany. Since the police sweep on Sept. 4, more refugees have arrived in Bodrum than ever before, and an increasing number of them are the desperately poor. The influx is at least partly due to rumours floating around that Germany would be sending transport ships to the region to pick them up.

As the tourist season comes to a close, more and more hotel owners here are beginning to accept refugee guests, allowing them to crowd into double rooms six to eight at a time. Smugglers have changed their tactics as well, offering discounted rates but with no guarantee of a successful outcome.

“It used to be that you would pay your money to a middleman who would hold it until you were successfully in Europe,” says Waqas Abbas, a 22-year old Pakistani migrant. “That’s only if you paid the higher amount —US$1,400 or more. The smuggler wouldn’t get paid until you made it to Greece and then called the middleman. But now, everyone has become a smuggler. They charge $400 or $500 but then keep telling you to wait. They say they don’t have a boat yet, or that there are no motors available. Some of them even take your money and then disappear. This has already happened to me once.”

According to one local café owner who has welcomed poorer refugees by offering them discounted prices or, whenever possible, free food for children, some of the most egregious exploiters have even begun selling cheap life jackets that quickly become water-logged and lose their buoyancy. “It’s disgusting,” she says, requesting anonymity. “Now we’re seeing more and more of these kinds of people around. Earlier on in the summer, the refugees we saw were more well-off—professionals and businessmen who had money. But now we’re getting poorer people. The streets are filling up with them, and, as we say in Turkey, wolves prefer foggy weather.” 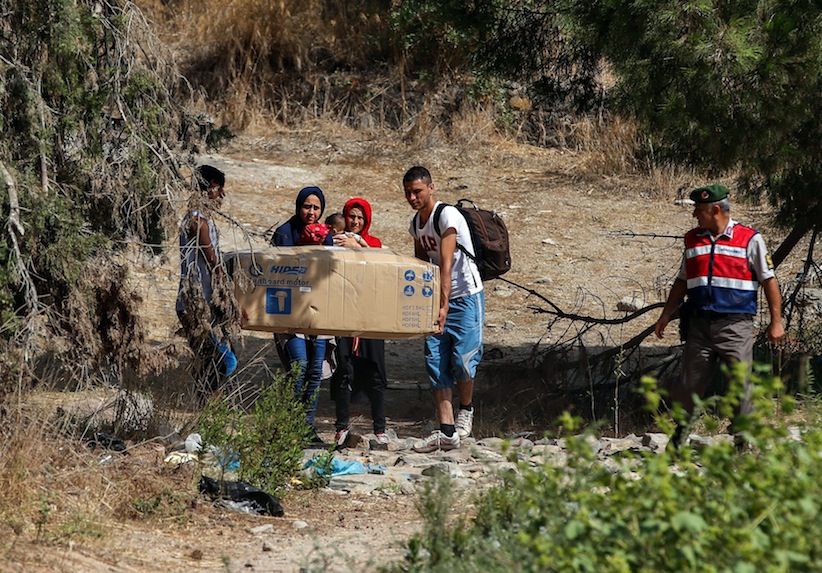 Indeed, the smuggling scene in Bodrum has become so fraught with uncertainty that even some of the wealthier Syrians have decided to go elsewhere. “That place is crawling with liars and cheats now,” says Aiham Addi, a Syrian refugee from Damascus who waited in Bodrum for two weeks before giving up and taking his chances with smugglers in Istanbul. “I was lucky because I paid a middleman and was able to get the money back. But some of these other people haven’t been so lucky.” Addi successfully reached Greece on Sept. 14 after paying $5,000 for a spot on a “yacht.”

His story is fast becoming the exception. The most popular boats being used in Bodrum these days are inflatable fishing boats. Discarded packaging from the boats litter the launch sites where smugglers prepare for the crossing to Greece. Elsewhere, the signs of a growing underground economy designed chiefly to exploit the poor and vulnerable are regularly washing up on the beaches of both Turkey and Greece. On Sept. 13, 34 more people died attempting to make the crossing, including four infants and 11 children.

Still the mass of humanity keeps on coming, driven by desperation and encouraged by reports that the world is watching. In reality, these most vulnerable refugees, who were promised safety, are still being delivered into the cold, dark sea.