'This is how the horror spreads'

Turkey’s movement for justice is facing off against its authoritarian president. Turkish activists are wondering: Why isn't Canada helping? 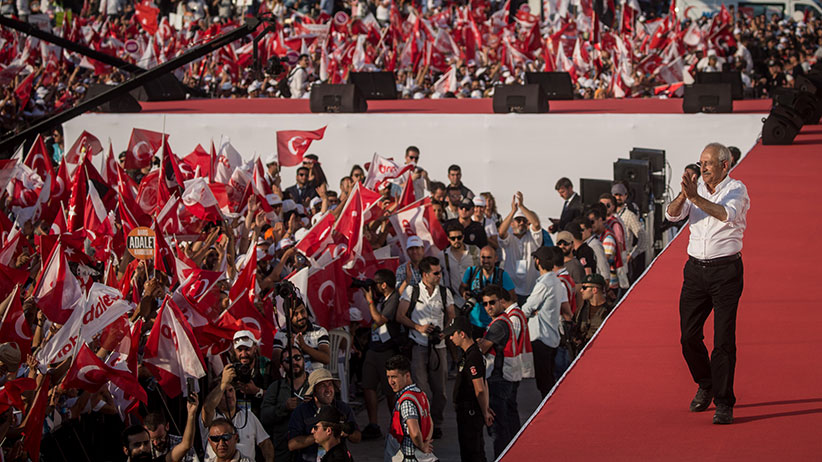 For a 68-year old, Kemal Kiliçdaroğlu packs some serious walking power. On day 24 of his 25-day March for Justice, the leader of Turkey’s opposition Republican Peoples Party, or CHP, sets a torrid pace on the seaside road in Pendik, near Istanbul’s eastern city limits, forcing the small army of police surrounding him into a light jog.

He has travelled 440 km since his trek began in Ankara, the capital. There is a swelling crowd of supporters—tens of thousands following him and thousands more lining the four-lane thoroughfare.

“Rights! Law! Justice!” they shout, a refrain that has spread across Turkey over the past few weeks. Some have accompanied Kiliçdaroğlu from the very beginning, lugging tents and sleeping bags through a journey that has survived Turkey’s worst heat wave in 15 years, a week-long sweatfest that saw temperatures consistently reach 40 C.

It has defied government threats and the vitriol of President Recep Tayyip Erdoğan’s supporters who have lined its route, heckling marchers and blasting pro-Erdoğan songs on loudspeakers as they pass.

Since the July 15, 2016 failed coup attempt, Turkey has spiralled into a black hole of legal uncertainty. According to official government figures, over the past year 169,013 people have had judicial actions brought against them for alleged links to Fehtullah Gulen, the U.S.-based Turkish preacher whose followers are accused of orchestrating the coup attempt. Of those, 50,510 have been arrested and another 48,439 have been put under “judicial control”, a kind of probation while their cases are investigated. Another 43,404 have been cleared of charges and released while more than 8,000 are on the run, including the former vice consul at the Turkish consulate in Toronto, Gökhan Toy, who has claimed asylum in Canada.

The judiciary has been one of the hardest hit institutions. Nearly a quarter of all judges and prosecutors in Turkey have been arrested or dismissed. And their replacements, says one legal expert, “are not something to be proud of.”

“The legal system is broken,” she says, requesting anonymity. “There is no due process anymore. Decisions are made by politicians and implemented by judges. And often those decisions don’t make any sense. An Islamic State militant can be released without any charges but a journalist can be detained indefinitely.”

Since the April 16 constitutional referendum, which transformed Turkey into a presidential republic, Erdoğan has consolidated even more power, including the right to appoint judges. An emergency law enacted in the aftermath of the coup attempt allows his supporters in the security and intelligence services to arbitrarily detain any perceived enemies, usually on vague charges relating to “membership of an armed terrorist organization.”

On July 5, 12 human rights activists, including Amnesty International’s Turkey director, were detained while attending a weekend training session on internet security in Istanbul. They remain in custody. Two days later, after raids on two universities, another 47 academics and bureaucrats were charged with being “membership of a terrorist organization.”

“Anyone can be taken at any time,” says the legal expert. “This is how the horror spreads, and people are silenced.”

The weakened judiciary has played along, mostly. Lawyers who challenge the arrests on legal grounds often face being arrested themselves. Judges, constrained by the emergency law, have little choice but rubber stamp detention orders. And Erdoğan appears to be immune to international criticism, regularly telling world leaders who question his tactics to mind their own business.

Canada has so far chosen to sit on the sidelines and watch the spectacle unfold. The Global Affairs website is remarkably thin on news bulletins covering Turkey’s post-coup environment, beyond encouraging Canadian companies to invest in the country. Prime Minister Justin Trudeau expressed concerns over the arrests in the days following the coup attempt but has since remained largely quiet.

For some Turks, Canada’s apparent silence is frustrating.

“Canada has become the moral voice of the world,” says one political scientist, who has now gone into hiding fearing he may be targeted for arrest. “Why is it so difficult for the Canadian government to take action against Turkey for these flagrant violations of international humanitarian law? My colleagues and I are perplexed. Canada should be leading on this front.”

A spokesperson from the Canadian embassy in Ankara directed Maclean’s to a tweet from Global Affairs Canada’s foreign policy twitter feed condemning the arrests of human rights activists in Turkey.

A spokesperson from Global Affairs Canada noted in an email statement that the Canadian government is “alarmed by the broad scope and scale of dismissals and detentions under the State of Emergency” and has voiced its concerns “in a variety of bilateral interactions and in international forums.”

In February, Immigration, Refugees and Citizenship Canada also announced it would extend the pre-removal risk assessment process to Turkish refugee claimants whose claim had been rejected, abandoned or withdrawn over the previous year, at a time when the rate of arbitrary arrests in Turkey was at its most fervent. The decision, IRCC said, would protect asylum seekers from deportation and was made because “conditions in that country had worsened.”

Since the coup attempt, asylum claims from Turkey have nearly quadrupled to 1,106 according to the Immigration and Refugee Board and the success rate of those claims is 82 per cent, significantly higher than the rate of refugee claims in general.

But human rights activists in Turkey are unimpressed. “It’s one thing to protect Turks outside the country,” says Ayşe Güngören, an LGBT activist in Istanbul. “But the international community is failing to address abuses the government is carrying out against its citizens inside Turkey.”

Güngören is infuriated by Canada’s silence after Turkish authorities shut down Istanbul’s Pride Parade last June 25. Tweets from Global Affairs praised successful parades in other parts of the world but said nothing about the violent crackdowns, including the alleged use of rubber bullets, on those who defied the Turkish government and marched anyway.

The political scientist blames the persistent belief that Turkey is a key regional partner for Canada’s softball foreign policy approach. “Canada seems to be stuck on this notion that Turkey is a necessary ingredient in its foreign policy mix,” he says. “But if it was more subtle in its analysis, it would realize that Turkey’s drift under the current leadership is moving it away from old alliances like NATO.”

Last year’s coup attempt was a pivotal moment, he adds, and its repercussions continue to ripple around the world. In Canada, a 2016 Maclean’s investigation showed, Turkey has been aggressively pushing its agenda on diaspora Turks and attempting to extend its purge of critics.

Last March, a source in Toronto provided Maclean’s the names of Turkish government supporters who he claimed were working with the Turkish consulate to pressure and harrass people belonging to the Gulen network. One of those on the list, Ahmet Dereci, was later implicated in a May 16 attack on anti-Erdoğan protesters in Washington, D.C.

“These are the kinds of people the Turkish government uses,” the source said last week. “People I know have been followed and sent letters threatening their families back in Turkey. No one I know was surprised when Dereci turned up in Washington.”

On June 15, U.S. authorities issued an arrest warrant for Dereci on felony assault charges. Erdoğan mocked the move, questioning its legal basis and arguing those charged were simply doing their job.

According to source in Toronto, Dereci fled to Turkey on June 16. His wife remains in Canada.

On July 8, Kemal Kiliçdaroğlu’s Justice March arrived at its destination at a sprawling fairground on the shores of the Marmara Sea in Istanbul’s Maltepe district. Hundreds of thousands converged on the site to show their support.

When Kiliçdaroğlu appeared, walking alone over the last 3 km, just as he had done when the march began, and bounding lightly up the steps to the lectern on a massive stage, the crowd roared.

“We walked for nonexistent justice. We walked for the rights of victims, jailed lawmakers and journalists,” he said.

For different people in the crowd, Kiliçdaroğlu’s call for justice meant different things. Ebru Simsek, a 26-year old protester described it as “equal opportunity for a good quality of life for all.” Akan Celik, a 28-year old, demanded the universal principle of the presumption of innocence. “In Turkey,” he said, “you are taken to jail and then you need to prove your innocence.”

Umut Oran, a former MP from Kiliçdaroğlu’s CHP where he was the party’s vice-president, took a more universalist approach. “Justice underlies everything,” he said. “Without justice, there is no freedom, no democracy. Justice means something different for everyone but it is necessary for everyone, not just in Turkey but around the world. That is what we are marching for.”

He would likely have cringed at what Erdoğan supporters thought. “Justice?” one of them said, clutching a flag emblazoned with the image of the Turkish president. “Justice is Erdoğan.”