'This is Kevin Vickers. Now he’s tackling our protesters in Ireland' 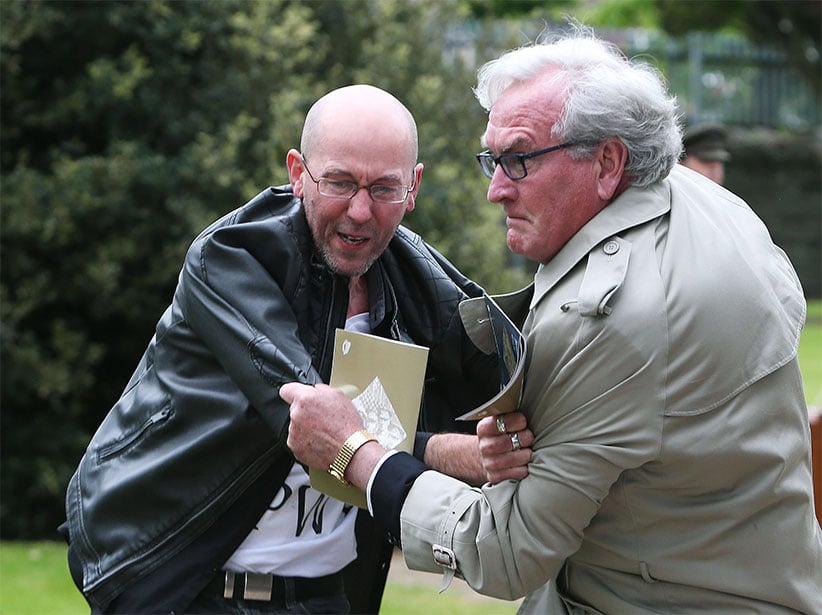 On Thursday afternoon Kevin Vickers, Canada’s ambassador to Ireland, was attending a ceremony at Grangegorman Military Cemetery in Dublin when a protester interrupted the proceedings. Vickers, the former Canadian sergeant-at-arms who killed Michael Zehaf-Bibeau after a firefight inside Parliament in 2014, tackled the protester, and video of the confrontation has since gone viral.

Neil Richardson, an Irish military historian, was at the event and sitting just behind Vickers. Here he explains what the ceremony was for and describes how events unfolded, as told to Maclean’s reporter Aaron Hutchins.

In Irish history, 100 years ago this year, we had the Easter Rising, which was a revolt in Ireland by armed rebels fighting for Irish independence from Great Britain. There have been a lot of commemorations in the past few weeks for the rebels, whose insurrection went on to create the modern Irish state. This particular event was to commemorate the British soldiers who died in the event.

I’m a military historian who’s written a few books about the Irish involvement in the World Wars—most recently, a book about the Irish soldiers who were serving in the British army during the Easter Rising in 1916. I was invited [to the event] as I had written a book about quite a few of the men being commemorated.

It was seen as a contentious ceremony because it is essentially commemorating the other side of the revolt from 100 years ago. The interesting quirk of history is that an awful lot of the British army soldiers at the time were Irishmen who had enlisted in the army to fight in the First World War. I think 99 per cent of the Irish population has moved on and there is a maturity about commemorating both sides of that event from 100 years ago, but there would be an element in Irish society that would view it as a commemoration of the enemy forces, if you want to phrase it that way.

It was just at the start of the ceremony, the Irish army officer was giving the opening address. There were only five rows of chairs. I was in the fourth row and this chap jumps up from two rows in front of where I was sitting, jumped out into a central aisle, opened his shirt to expose a T-shirt with a political slogan and started cursing, and shouting “This is a disgrace.” I think everyone had this momentary [thought]: “Oh, who is this interrupting the ceremony?”

As [the protester] moved to the central area, he would have moved past Irish Army officers and British army officers who were sitting in the congregation observing. All of a sudden, this gentleman in a suit jumps up from the front row and started tackling him.

They fought in front of the rows of chairs and the protester got free and ran to the side of the congregation and the Canadian ambassador chased him. That’s where the guy was apprehended by Irish police.

I don’t think many people were even aware it was the Canadian ambassador. I had no idea who it was. One or two people were wondering, is it a member of the Irish police in plain clothes? Is it the minister’s security detail?

The Canadian ambassador just brushed himself off, returned to his seat, and the ceremony continued. Very solemn, very dignified. There was no more trouble. Given what the event was commemorating, I’m surprised there weren’t more protesters.

Anglo-Irish relations have come on tremendously well since 1916 and there were representatives from the Irish-Anglo forces and the British armed forces. The British ambassador laid a wreath alongside the minister for foreign affairs and trade. It was a holistic ceremony.

We were all invited to the Irish army barracks nearby for refreshments and the word started to spread that the gentleman who tackled the protester was Canadian ambassador Kevin Vickers, famous for the events in Canada. It didn’t overshadow the event, but it was the talk among the people.

What was most notable was how quickly he responded. The attitude is ‘This is Kevin Vickers, and now he’s tackling our protesters here in Ireland.” The folk hero thing might be spreading.

Former HOC sergeant at arms, who shot Ottawa gunman who stormed Parliament in 2014 in the news b/c of THIS! #Dublin https://t.co/JGRMf2lZU8

This interview has been condensed and edited for clarity.