By Balint Szlanko And Qassim Abdul-Zahra, The Associated Press August 15, 2017 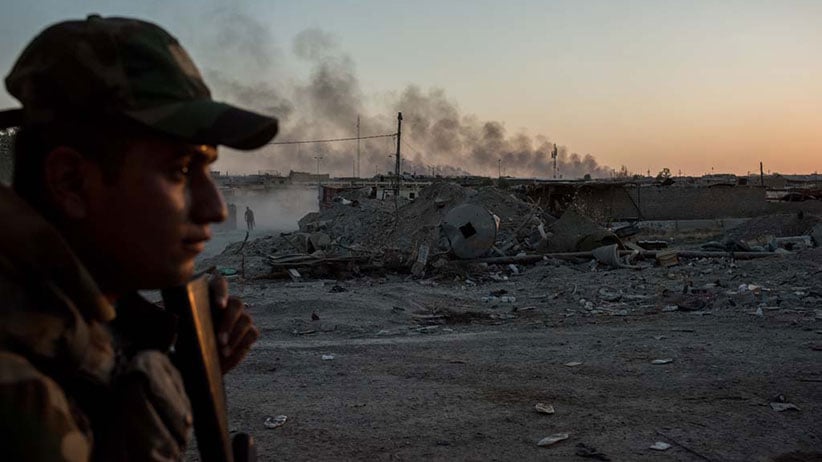 Tal Afar and the surrounding area is one of the last pockets of IS-held territory in Iraq after victory was declared in July in Mosul, the country’s second-largest city. The town, about 150 kilometres (93 miles) east of the Syrian border, sits along a major road that was once a key IS supply route.

On Monday, hundreds of exhausted civilians were brought by Iraqi army trucks from the front line to a humanitarian collection point just west of Mosul. Many described a harrowing journey of a day or more from Tal Afar, with no food or water.

Jassem Aziz Tabo, an elderly man who arrived with his 12-member family, said he had left Tal Afar months ago and gone to a village on the outskirts to escape hunger, airstrikes and violence from the militants.

He said severe shortages have caused the price of food to skyrocket in Tal Afar, which has been besieged by Iraqi forces for months, with a kilogram (2.2 pounds) of sugar selling for $50.

RELATED: The terrifying last days of ISIS in Mosul

“There was nothing. We were eating pieces of bread with water,” he said.

Alia Imad, a mother of three whose family paid $300 to a smuggler to lead them to safety, said there is no drinking water left in the town. “Most people drink water that’s not clean. The majority are surviving on that and a bit of bread,” she said.

The group she was with had come under fire during their escape from the militants, she said. A woman was killed, and they had to bury her by the road.

“Thousands of people are leaving, seeking safety and assistance. Families escaping northeast are trekking 10 and up to 20 hours to reach mustering points. They are exhausted and many are dehydrated when they finally arrive,” she said.

Lt. Gen. Anwar Hama, of the Iraqi air force, told The Associated Press that airstrikes this week have targeted IS headquarters, tunnels and weapons’ stores.

But Iraqi forces, closely backed by the U.S.-led coalition, are not expected to push into the town for another few weeks, according to an Iraqi officer overseeing the operation. He spoke on condition of anonymity in line with regulations.

RELATED: On the hunt for ISIS weapons in Mosul

Iraqi army, federal police and special forces units are expected to participate in the operation, as well as state-sanctioned mostly Shiite militias known as the Popular Mobilization Forces.

The militiamen largely stayed out of the operation to retake Mosul, a mostly Sunni city, but have vowed to play a bigger role in Tal Afar, which was mostly Shiite before it fell to IS, a Sunni extremist group. The militias captured Tal Afar’s airport, on the outskirts of the town, earlier this year.

Their participation in the coming offensive could heighten sectarian and regional tensions. Tal Afar was once home to Shiite and Sunni Arabs, as well as a sizable ethnic Turkmen community with close ties to neighbouring Turkey.

Turkey has repeatedly warned that military operations in and around Mosul should not lead to demographic change. Some Turkish officials are concerned that once territory is liberated from IS, Iraqi Kurdish or Shiite forces may push out Sunni Arabs or ethnic Turkmen.

On Monday, the Iraqi army began moving an armoured brigade to the front line south of Tal Afar, while an infantry division was deployed about 30 kilometres (19 miles) to the town’s east.

Brig. Gen. Abdul Hussein al-Khazali, deputy commander of the army’s 15th division, said his forces were going to inch closer to Tal Afar village by village before they are ready to launch the final attack, partly to ensure they can protect fleeing civilians.

The United Nations says some 49,000 people have fled the Tal Afar district since April, compounding a humanitarian crisis that has lingered despite the cessation of major fighting inside Mosul. It says nearly a million people were displaced by the Mosul campaign.