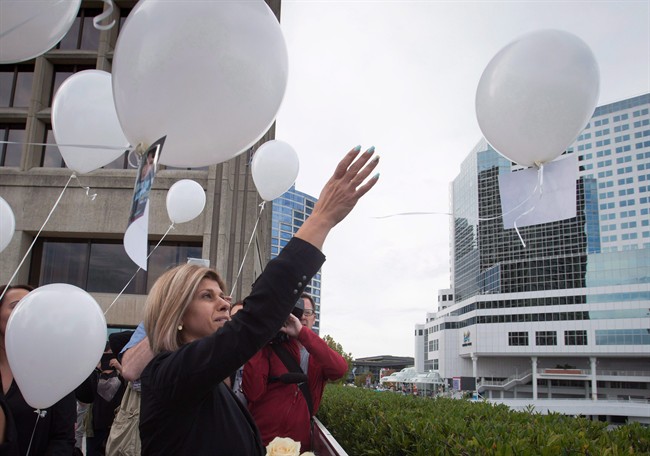 BRUSSELS – The aunt of the Syrian refugee child whose body washed up on a Turkish beach is appealing for more help for Syrian refugees.

Tima Kurdi travelled from her home in Coquitlam, B.C., to Brussels, where she spoke Monday in front of a wall that now includes a painting of her dead three-year-old nephew, Alan, telling reporters that Europe must not slam the door on desperate refugees.

“I feel this little Alan was a message from God to wake up the world,” Kurdi said. “And I am the messenger here.”

Related: Inside the tragedy that woke up the world

The Kurdi boys — Alan, and five-year-old Ghalib — and their mother were among at least 12 migrants, including five children, who drowned Sept. 2 when two boats carrying them to the Greek island of Kos capsized.

The heartbreaking photo of a drowned Alan — wearing a bright-red T-shirt and blue shorts — has put a human face to the humanitarian crisis, both globally and in Canada.

The European Union failed Monday to reach agreement on a plan to share 120,000 refugees arriving in Italy, Greece and Hungary.

Luxembourg Foreign Minister Jean Asselborn said after chairing a meeting of EU interior ministers in Brussels that “it is premature for the Council to take a decision today.”

The Czech Republic, Slovakia and Hungary had been among the nations opposed to the refugee sharing plan leading up to the emergency meeting.

Hungarian police have rolled a train car covered on one end with seven coils of razor wire up to the border with Serbia, where the improvised obstacle was used to cap a strategic gap in the country’s border fence.

“They flee the war, from dangers, from dying, and you put the fence … they (countries) can and should build a longer table, not a higher fence,” she said.

Meanwhile, Romania’s president said his country is not “xenophobic, autistic, or separatist,” but just unable to absorb large numbers of migrants.

President Klaus Iohannis said Romania wanted to help in Europe’s migrant crisis, suggesting it could beef up the external borders of the European Union. He said Romania’s problem is not finding shelter for migrants but integrating them.

Finland, meanwhile, has said it will increase monitoring its borders as hundreds of asylum seekers flood in daily from Sweden.

The Nordic country will also open reception centres for migrants in northern Finland, especially along the border.

In Canada, the crisis has become an issue in the federal election campaign, with opposition parties pressing Prime Minister Stephen Harper to expedite the process for refugee resettlement.