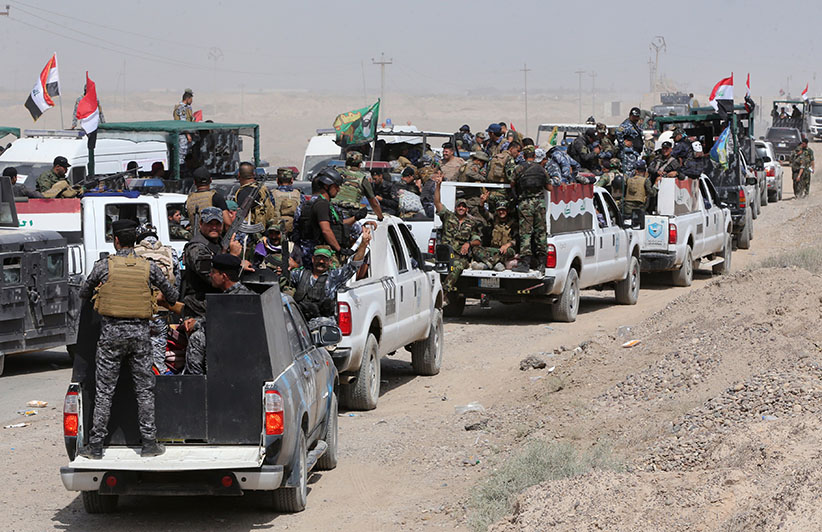 An army that holds a clear advantage in soldiers, equipment, intelligence and air power should be well placed for success. Yet last week Ramadi, a strategic city 130 km west of Baghdad, was abandoned by Iraq Security Forces despite superiority in numbers and position. Its loss has become a substantial military and propaganda victory for Islamic State.

“What apparently happened was that the Iraqi forces just showed no will to fight,” a disappointed Ashton Carter, U.S. defence secretary, told CNN last weekend. “They were not outnumbered. In fact they vastly outnumbered the opposing force, and yet they failed to fight.” That the fleeing forces included portions of the highly touted “Golden Division,” an elite Iraqi fighting unit that’s received many years of American military training and attention, makes the withdrawal even more discouraging. Numerous U.S.-provided vehicles and weapons were also lost in the retreat. While the White House this week tried to walk back Carter’s criticism for diplomatic reasons, the evidence on the ground contradicts U.S. President Barack Obama’s February claim that Islamic State “is on the defensive . . . and going to lose.” Despite a series of minor victories against Islamic State throughout the spring, the defeat at Ramadi, and the manner in which it occurred, calls into question the entire strategy for containing and degrading Islamic State.

In the interests of limiting casualties and maintaining public support, countries in the U.S.-led coalition against Islamic State—Canada included—have restricted themselves to providing air support, training and supplies; Canada’s CF-18s have flown more than 620 sorties against Islamic State targets. It is up to the Iraqi army to fight the battles on the ground and consolidate any territorial gains. While such an approach may be politically appealing at home, it’s beginning to look like a failure on the front lines. Air power alone will never be enough to defeat Islamic State.

An exhaustive report this month from the Washington-based Institute for the Study of War concludes “the only way to defeat [Islamic State] is to guarantee a ground force will occupy, secure and rebuild Syria and Iraq.” Given Obama’s repeated vow that he will not put U.S. ground troops back into action in Iraq (and a similar sentiment in Canada), the recent failure at Ramadi suggests a large gap between what the coalition is prepared to do and what will be required to bring this conflict to a successful completion. How do we solve this strategic dilemma?

In the absence of a Western ground force in Iraq, the only other realistic possibility is for neighbouring Arab nations to step up to the plate. Currently Jordan and Morocco are participating in the air strike campaign; more should be expected from the entire region. In April the Arab League, an organization of independent Muslim nations across Africa, Asia and the Middle East, announced the creation of a rapid deployment force of 40,000 troops from 10 nations; some call it “the Arab NATO.” This force, which has tacit U.S. approval, is intended to respond to requests from Arab nations facing national security threats and to combat terrorist groups. In something of a dry run earlier this year, Saudi Arabia and Egypt deployed to Yemen in an effort to end the civil war there. Given the right set of circumstances, Iraq could be the next logical destination.

There are some obvious issues with an “Arab NATO” intervention in Iraq. Given the group consists exclusively of Sunni nations, there’s the possibility it could lead to religious persecution of Shias. There’s also the risk it could become a catalyst for conflict between Saudi Arabia and Iran, both of whom style themselves as regional powers with interests in Iraq. Recognizing these caveats, however, there are several strong arguments in favour of Arab nations taking on more responsibility for combating Islamic State. The militaries involved, including Saudi Arabia, Egypt, Morocco and United Arab Emirates are generally aligned with the West and have access to their know-how, and are well-stocked with modern Western hardware. Their troops are also more reliable and better trained than those in Iraq, which is an improvement over the existing situation. Most important, these countries have the largest stake in achieving peace and stability in Iraq, given the problem is in their own backyard. Motivation is the crucial factor.

It is entirely proper for the U.S., Canada and the rest of the participating Western nations to have joined the fight against Islamic State. The global threat posed by this vicious band of radical jihadists is simply too great to ignore. But it’s time the stable countries of the Middle East took on greater responsibility for solving their own neighbourhood problems. Intervention by the equivalent of an Arab NATO−if the risks can be contained−offers a realistic way forward.