To sit or stand? It's Sunday night in the NFL.

From the parking lot up to Section 412, fans of the Washington Redskins came to watch some football, and talk about their basic rights 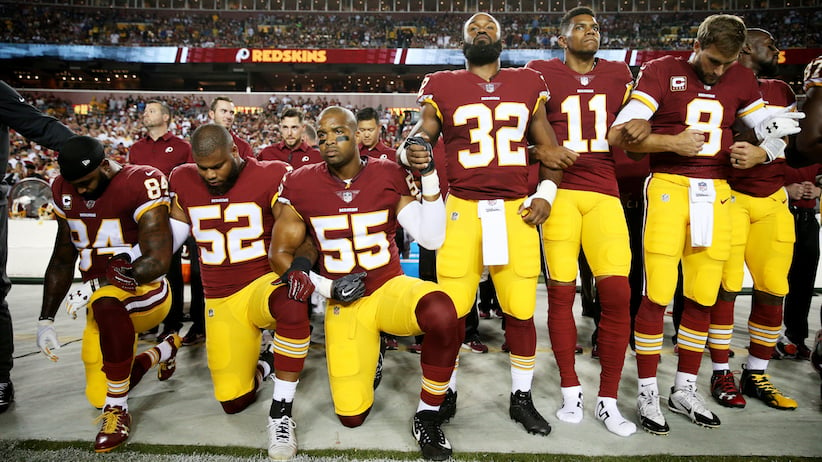 Washington Redskins players during the the national anthem before the game against the Oakland Raiders at FedExField on September 24, 2017 in Landover, Maryland. (Photo by Patrick Smith/Getty Images)

“You saw it, write it!” the Pro Football Hall of Famer Willie Wood used to snarl at reporters after coaching the Toronto Argonauts to yet another disaster—they never won a single game under his tutelage—back in the long ago. And so a witness to one of the most extraordinary episodes in the history of organized athletics—and of the American presidency—simply describes what he saw and heard on Sunday night.

Four hours before the Washington Redskins and Oakland Raiders are to compete at Washington’s home stadium—and two nights after the President of the United States called for any “son of a bitch” (his exact words) who refuses to snap to attention for The Star-Spangled Banner to be banned from the game without trial or jury, and for patriotic fans to boycott the arenas in retribution, the parking lots already are happy and full.

It is autumn in Washington, but the heat of an endless summer oppresses the vast macadam. A big Ohioan named Clarence Savage Jr. parks his van and steps outside for a gulp of capital air. Savage is an ex-Navy man who served as an X-Ray technologist aboard the USS Dwight D Eisenhower off the coast of Iran. He says that he hasn’t attended a National Football League game in more than 30 years. What a time he has picked to return.

Savage played football at Southern University, an “historically black” college in Baton Rouge, La., and, unlike Donald Trump, he wore his country’s uniform for 20 years. He says that he voted for Hillary Clinton last year only because she was the lesser of two bad choices, and he is a fan of the Raiders, whose jet-black colours and piratical skull and crossbones he and his wife and their 19-year-old son are wearing to the game today.

READ: Trump, taking a knee in the NFL and the true meaning of patriotism

Were he playing for the Oaklanders in this fractious epoch, he says, he would stand for the national anthem with his hand over his heart. “I stand up,” he avows. “I stand up for freedom.” But he would not abjure any teammates who chose to sit or kneel, because, in this black man’s words, “even a member of the Ku Klux Klan has the right to express himself in the United States of America, as long as he’s not breaking the law.”

“I am willing to die for other people’s freedoms,” says Clarence Savage, Jr. “But I would say to the man from the KKK, ‘Why do you hate me?’ ”

Savage can remember when, as a child on the wrong side of Cleveland, he was lifted out of his all-black classroom and dropped into a white school as an experiment in integration. He says, “In the classroom, we were all equal, but on the playground they called me the N-word. And the whole time, they were filming me.

“We got a long way to go in this country,” he says, “but I’m staying right here. I’m not going back to Africa, brother.”

He rubs his massive forearm. “All this prosperity, all this education, and we’re still trippin’ over colour?” he laments.

Nearby, a white man named Fritz Boettcher is tailgating with a friend named Bob Bankoski, and with Bob’s daughter and wife. “I’m a Trump guy,” Boettcher says, but he allows that, “this time, he may have taken on the wrong group of people.”

The quartet has driven all the way down from Dunkirk, N.Y., south of Buffalo, to watch Bob’s beloved Redskins and Fritz’s Raiders do battle on the storied green. Fritz played football at Canisius College, Bob in high school in Dunkirk.

“If you’re an NFL player, what do you do during the anthem today?” Fritz is asked.

“I stand at attention with my right hand over my heart,” he answers. He says that he would concede to using his left arm to link with the teammate standing beside him.

“Is it treason to kneel?” one wonders.

“It certainly is not treason, it falls under the First Amendment, but it’s not the place to do it,” Boettcher replies.

“Are you going to walk out if anybody takes a knee, as the president says?”

“NFL attendance and ratings are WAY DOWN,” tweets the president of the United States. “Boring games yes, but many stay away because they love our country. League should back U.S.”

“Are you going to walk out?”

“If we didn’t drive so far, I would,” says Bankoski’s daughter.

At the exit of the parking lot, a man is selling T-shirts that say BITCH I’M A REDSKIN. The big stadium’s gates are open, and the lubricated tailgaters of America rush and giggle through.

FOUL OR OFFENSIVE LANGUAGE IS DISCOURAGED, the scoreboard warns, but the White House is too far away for the admonition to be noticed.

Up in Section 412, which is far from full, a man named Brandon Armour—his friends call him “Under”—is wearing a Raiders jersey and brandishing a plastic cutlass that he bought at Family Dollar and somehow was allowed to swashbuckle into the park.

“What do you do if you’re on the field today?” he is asked.

“I kneel or I sit,” says Armour, who is African-American and who works at a Washington non-profit called Community Connections. “Silent protest. Same as I do at work, when I wear all black. But I am always courteous to my fellow workers, and ready to have a polite discussion with people I disagree with. It’s all about awareness.”

Armour says that when Colin Kaepernick, then the quarterback of the San Francisco 49ers, first knelt during the national anthem, “I was hyped. I was ecstatic. But now, it seems to have cost him his job.”

Now the gridiron is occupied by the Redskins cheerleaders—“the first ladies of football”—and the team’s marching band and an American flag that stretches from one 40-yard line to the other. An Army crooner sings God Bless America before the players come out. A nine-year-old girl officiates the coin toss after they do. A 16-year-old girl is to perform the bellicose carol, with its bursting bombs glaring rockets and stalwart flag.

On one side of the field, nearly all of the Oakland Raiders remain seated on their bench. On the other, the Redskins stand together, locking arms with the dozen or so who choose to kneel. Dan Snyder, the team’s owner and the most despised man in Washington, D.C. until Jan. 20, stands with them.

“Football has always served as the great unifier, bringing people together to celebrate the values of courage, commitment and achievement,” Snyder’s Redskins declare in an unsigned statement released at game time. “We are proud of the players, coaches and fans of the Washington Redskins for all that they have done to improve the lives of others in neighbourhoods all across our region.”

There is scattered booing across Section 412. A large majority of the men and women up here are African-American. This is their team, their city, their game, their passion.

“GET UP!” one voice is heard to bellow as the implacable Raiders sit. “GET UP!”

No one budges as the match begins. All the rest is football.