Toru Hashimoto, the brash, young mayor of Osaka, is Japan's most popular politician 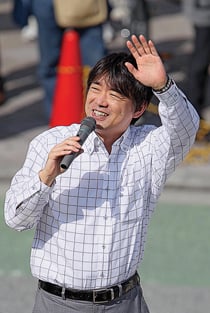 In a country known for the blandness and advanced age of its politicians, Toru Hashimoto, the mayor of Osaka, is an anomaly: at 42, he is the most popular political figure in the country, and he may be changing the way politics are done in Japan. His ascendancy reflects a growing disenchantment with government in the wake of the Fukushima Dai-ichi disaster and has helped extinguish, at least temporarily, the country’s nuclear-power supply.

A brash lawyer, Hashimoto first found fame as an acid-tongued television personality, thriving in a media culture that loves the outrageous. Despite his decidedly contemporary, impolitic dress—ripped jeans and a shaggy haircut—he was elected governor of Osaka in 2008. In the job, he boldly cut social-welfare programs and pruned back the bureaucracy. When Japan’s consensus-building political culture proved too taxing, Hashimoto created his own party, Osaka Ishin-no Kai. His approval ratings soared.

Then, last year, he quit his post as governor and announced he would run for mayor of Osaka, which is both a prefecture and Japan’s third-largest city. The backlash prompted a number of tabloid magazines to delve into his past. The stories alleged Hashimoto’s father had yakuza connections and that he died by suicide when he could not repay the debts he owed the gangsters; the articles also described how Hashimoto grew up under Dickensian conditions in a neighbourhood whose denizens traditionally included buraku, a minority group. These revelations, which Hashimoto more or less confirmed, were a blow for a man whose success has hinged upon his media savvy. So was the adoption by many critics of the byword “Hashi-ism,” a punning riff on “fascism.” (“Japanese politics needs a dictator,” Hashimoto recently said.) None of it mattered. He won the mayoralty race handily.

Hashimoto is a master at seizing upon public fears with flashy single-issue campaigns to shore up political support. Most recently he has exploited worry surrounding Japan’s nuclear power plants, for 40 years an energy staple for the resource-poor nation, in the wake of last year’s earthquake and tsunami. Most nuclear power facilities have been shuttered since the tsunami-damaged Fukushima Dai-ichi plant spewed radiation, but the central government in Tokyo sought to keep a handful online ahead of powering up even more of the plants. One facility that Tokyo was considering re-firing was the Ohi plant in Fukui prefecture, near Osaka. Hashimoto ignored the fact that Osaka has no formal say in the operation and issued eight conditions he said the government would have to meet before receiving his approval, including beefier safety regulations and an independent regulatory agency. He also struck his own committee of experts to study the issue.

Critics say the gambit is wholly political—a wedge issue that will help shoehorn Osaka Ishin-no Kai seats into the lower house in Tokyo in an upcoming national election. Whatever his motivations, his campaign prevented Tokyo from reopening the Ohi plant, meaning that every last nuclear power plant in Japan had ceased operation; instead, Japan is relying more heavily on expensive oil and gas imports. For the first time since 1970, Japan was nuclear-free, thanks to Hashimoto.