Transcript: The White House on the Ottawa shooting 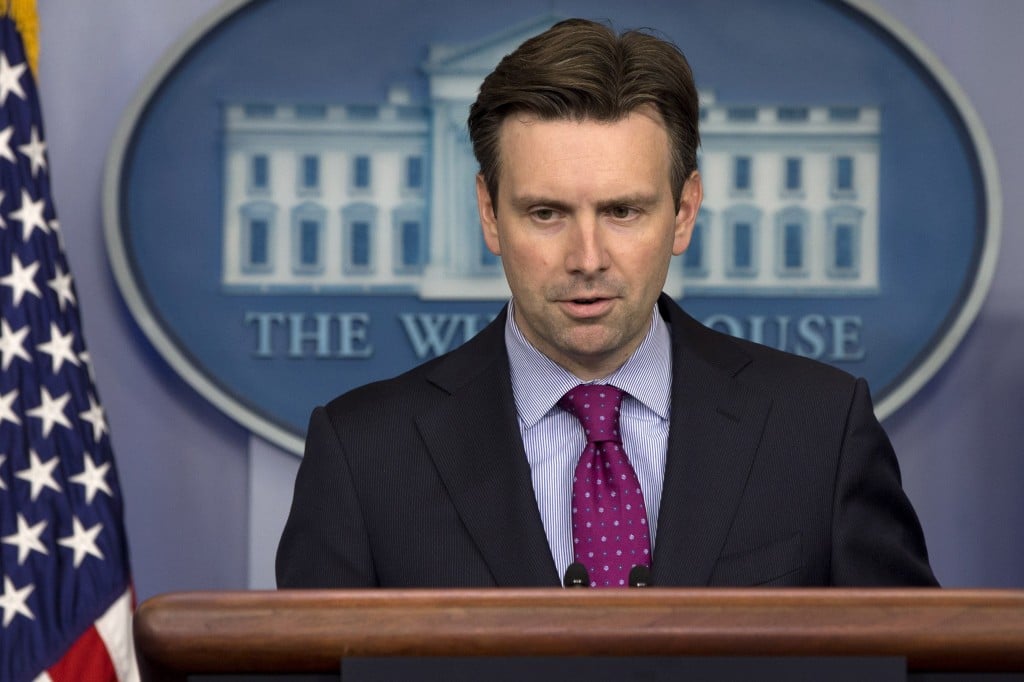 White House press secretary Josh Earnest speaks during his daily news briefing at the White House in Washington, Wednesday, Oct. 22, 2014, where he spoke about the shootings in Canada and answered questions about Ebola. (Jacquelyn Martin/AP)

I want to begin by saying that the thoughts and prayers of everyone here at the White House go out to those who are affected by today’s shootings in Canada, as well as to the family of the soldier who was killed earlier this week.

The president was briefed earlier today in the Oval Office by his top Homeland Security advisor, Lisa Monaco. The details about the nature of this event are still sketchy which is not unusual in a chaotic situation like the one like this one.

Canada is one of the closest friends and allies of the United States. From issues ranging from the strength of our NATO alliance to the Ebola response, to dealing with ISIL, there is a strong partnership and friendship and alliance between the United States and Canada.

The United States strongly values that relationship and it makes the citizens of this country safer.

Officials inside the U.S. government have been in close touch with their Canadian counterparts, that includes officials here in the White House.

We have been in touch with the Canadians about arranging a phone call between the president and Prime Minister Harper at the prime minister’s earliest convenience – he is obviously dealing with a lot today. As soon as we can arrange that call, we’ll let you know.

Is there any indication of connection to terror groups?

Earnest: We are obviously in the very early stages of determining what exactly happened here. As I mentioned, a number of U.S officials in this government have been in touch with their Canadian counterparts to offer assistance as they respond to and deal with this tragic situation.

Is there any reason for U.S. government facilities or other areas of the U.S. to be on high alert because of what is happening in Canada?

Earnest: I am not aware of decisions made by individual components to change their threat status. There are a number of agencies responsible for maintaining that threat status. Here in the U.S. it’s the Department of Homeland Security that is responsible for setting the terror threat level. There are other agencies like the Department of Defense that sets threat conditions. I’d want those agencies to confirm that.

Are FBI or CIA offering their assistance in the investigation?

I’d check with those individual agencies. I don’t have a run down of who has made a phone call to their Canadian counterparts.

Any change to security measures being taken here at the White House?

Earnest: Not that I am aware of but you can check with the Secret Service—they are responsible for maintaining the appropriate security levels here at the White House. If they have something to announce, they’ll be the ones to do that.

We know that U.S. law enforcement officials have been concerned about there being some kind of raise in the threat level because of what is happening in the anti-ISIS campaign in Iraq and Syria. Has that concern been shared with Canadian authorities, have US sand Canadian authorities been talking about this in recent weeks?

Earnest: We’re talking as a general matter here – I don’t want to draw any conclusions about today– that said, the U.S. has been in touch with Canadian counterparts over the last several months to talk about this issue of countering violent extremism and trying to deter foreign fighters who could be radicalized by ISIL. ISIL has demonstrated a capacity to use social media and other aspects of modern technology to try to radicalize [assistance] in other countries. I know the Canadians were active participants in the UN Security Council meeting that the president convened last month in New York to address this specific issue of countering foreign fighters. I believe – I don’t remember frankly – I don’t recall if Prime Minister Harper himself attended that meeting but I know the Canadians were supportive of that process and have been engaged in working with the United States on these broader efforts to counter foreign fighters. Foreign fighters, again, just to remind folks, are individuals in countries around the world that have been recruited by ISIL to travel to the region, to take up arms, to get training and to fight alongside ISIL and their cause. The concern that the US and other countries around the world harbour is that these individuals could return to their own countries and commit acts of violence.

The circumstances around today’s tragic events in Canada are still unknown, but that is a concern that is a concern the U.S. has been focused on for quite some time. We have been talking to other countries about steps we can take in coordination to mitigate that threat. And Canada is one of the countries that has been robustly engaged in those efforts.

The second thing I would say about that is the whole reason that this administration has worked hard to build a broad coalition against ISIL is because their did pose a broader risk to the United States, our interests and our allies in the region. And there has been a concern about the risk expanding if they were able to establish a safe haven in Syria. Our efforts are motivated to denying them that specific safe haven. So this is something that we continue to be focused on. We are appreciative of the commitment that Canada has made to this broader international effort – alongside some 60 other countries.

Q: Should the urgency around the security situation [around the White House] be reevaluated in light of what is happening in Ottawa?

Earnest: I know there was already a pretty strong sense of urgency associated with completing the review of the security posture around the White House.

I don’t know if it was further enhanced by what is happening in Ottawa. I know it was already happening at a pretty high level.

As it relates to security precautions that are in place at the Capitol, I would of course defer to the Capitol Police who are responsible for protecting the Capitol, for those kinds of assessments.  Here at the White House, I know there is an effort taken to try and balance the need to preserve to preserve the White House as the people’s house. There are thousands of tourists who come through the White House and walk out the front door of the White House on a daily basis. There are hundreds of us who work here on a regular basis. Facilitating the efficient entry and exit of those of us who work here is a key priority. But, at the same time, the top priority has to be safeguarding the First Family. Balancing those priorities is difficult. There is a similar dynamic in play at the U.S. Capitol. I am confident that the Capitol Police is aware of that need and is doing everything necessary to grapple with that challenge. In terms of recommended changes, we obviously defer to them.

LIVE BLOG: Updates on the Ottawa shooting as details emerge

Ottawa shooting: Photos from the scene