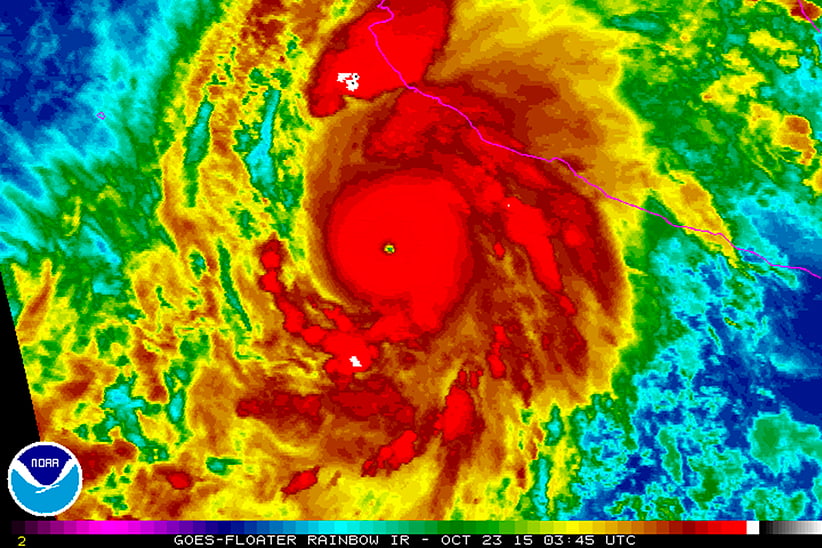 A handout picture released by the U.S. National Oceanic and Atmospheric Administration on October 23, 2015 shows Hurricane Patricia as it approaches the coastline of Mexico from the Eastern Pacific. (NOAA/EPA)

The Department of Foreign Affairs has one message for the nearly 2,000 Canadians believed to be in parts of Mexico possibly in the path of a major hurricane — get out if you can.

The department has issued a travel warning for the popular tourist destination as hurricane Patricia, currently classified as a Category 5 storm, prepares to make landfall on Friday.

The U.S. National Hurricane Centre describes the storm as “potentially catastrophic” and says it currently features sustained winds of up to 325 kilometres per hour.

“Canadians in the affected areas should seek shelter, and consider leaving if it is safe to do so,” Foreign Affairs said in a statement. “Some airports are closed and flights to and from the affected areas have been suspended. If Canadians are leaving by land, they should do so without delay, as road closures may occur at short notice.”

The storm was honing in on a Pacific coastline dotted with sleepy fishing villages and gleaming resorts, including the popular beach city of Puerto Vallarta and the port of Manzanillo. After hitting land, Patricia’s projected path would quickly take it over mountainous terrain that is prone to dangerous flash floods and landslides.

Foreign Affairs said 500 Canadians are currently registered as being in the affected state of Jalisco as of Thursday afternoon, but estimated the true number was closer to 2,000.

Travellers who booked their trips through major travel company Transat account for more than 450 of them, according to spokeswoman Debbie Cabana.

Those clients, however, will not be leaving the country any time soon. Cabana said travellers are being evacuated to safe locations in accordance with the individual emergency plans established by all hotels in the area.

“It’s not unusual for this region to have hurricanes,” she said. “They’re not all as strong as the one that we’re experiencing, but (hotels) are kind of prepared for this kind of event.”

Cabana said clients may be relocated from ocean-front rooms to less exposed quarters, adding some hotels may opt to move guests off the premises altogether.

Foreign Affairs cautioned those in the area that Patricia could bring about food and water shortages in addition to damage caused by flash flooding. Canadians are strongly discouraged from visiting the Mexican coast between San Blas and Lazaro Cardenas.

Officials are watching Patricia with some trepidation, even drawing comparisons to other recent, devastating storms.

Some say the hurricane’s current strength is reminiscent of Typhoon Haiyan, which left more than seven-thousand people dead or missing in the Philippines two years ago.

In Puerto Vallarta, residents reinforced homes with sandbags and shop windows with boards and tape, and hotels rolled up beachfront restaurants. The airport was closed to all flights and all but deserted, but lines formed at a bus station with people anxious to buy tickets to Guadalajara and other inland destinations.

Fire trucks and ambulances rolled through the streets, sirens blaring, as emergency workers warned people in both Spanish and English to evacuate.

One Canadian couple, however, had no plans to decamp from the heart of the storm.

David Lloyd of Edmonton just moved into a Puerto Vallarta high rise with his wife and said the current plan is to try to ride the storm out at home.

“We’ve just pulled everything off the patio that could be blowing around. We’re establishing a safe zone inside the apartment that will be away from any windows,” Lloyd told ABC news. “We’ll hunker down.”

Lloyd said he expects that he could be without power for up to four days if early forecasts prove accurate.

— with files from the Associated Press.