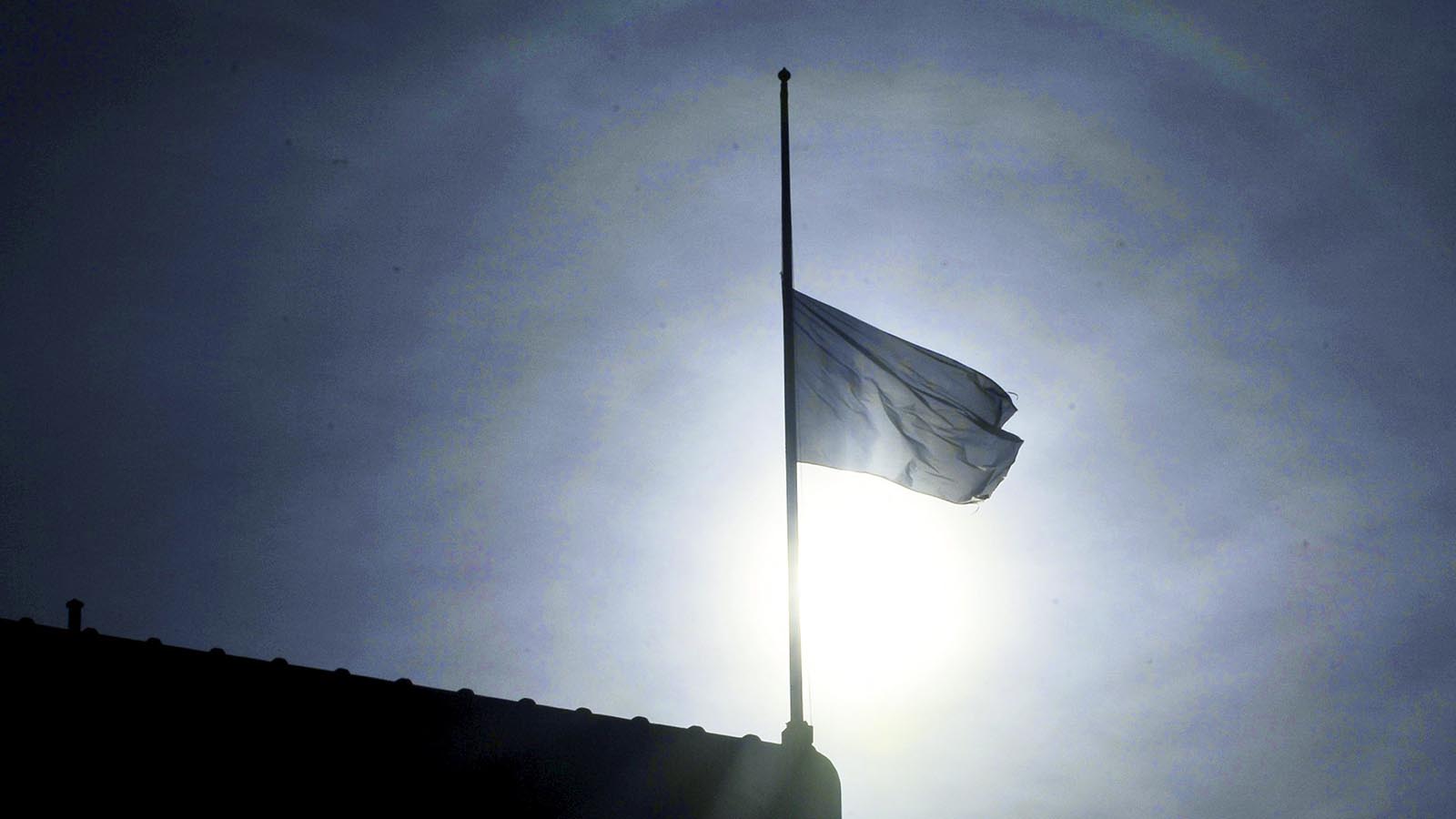 Half-masted European Union flag is seen on the roof of the European Parliament information office in Helsinki, Finalnd 22 March, 2016. Police in Denmark, Sweden and Finland have stepped up security at airports and public places following the explosions in Brussels on Tuesday. REUTERS/Aku Hayrynen/Lehtikuva

OTTAWA — Prime Minister Justin Trudeau condemned Tuesday’s attacks in Brussels, as his cabinet said they see no imminent threats to Canadians on their soil.

“I was outraged when I woke up to the news that so many innocent citizens had been killed and injured — shocked and profoundly saddened,” Trudeau said after a cabinet meeting on Parliament Hill.

“This cannot and will not be tolerated.”

But in the Commons, Conservative MPs took the opportunity to reignite criticisms of the Liberal government for pulling Canadian fighter jets out of the bombing campaign against Islamic extremists in Iraq and Syria and for promising to repeal sections of the Tory anti-terrorism law giving security forces more power to disrupt and prevent terrorist networks.

Interim Conservative Leader Rona Ambrose noted that the new anti-terror tools have been used by authorities and called on Trudeau to reverse his position so that “security forces can keep Canadians safe from terrorism.”

Public Safety Minister Ralph Goodale said the government intends to follow through on its election campaign commitment to “do everything in our power to make sure that our security and police services were effective in keeping Canadians safe and, at the same time, that Canadian rights and values and freedoms were thoroughly and properly respected.”

“There is no contradiction between those positions,” he said.

Trudeau, Goodale and Foreign Minister Stephane Dion also pledged solidarity with Belgium and the European Union and the victims of the attack.

Dion called it a “black Tuesday” for Belgium, as support reverberated across Canada with the premiers of Alberta and Saskatchewan pledging their support and resolve.

“Hearing the screams of children in the smoke of the Brussels metro only strengthens our resolve to combat terrorism in all its forms, and increases our solidarity with the people of Belgium and the whole of Europe,” Dion said.

Goodale said the threat level will not be changed in wake of the attacks, which remains at medium, where its been since October 2014, when two Canadian soldiers were killed in separate attacks at the National War Memorial in Ottawa and in Saint-Jean-sur-Richelieu, Que.

“There is no information available to RCMP or CSIS that would lead us to any change in threat levels,” he said.

A visiting European politician called for a moment of silence on Parliament Hill at the start of a press conference at the main press theatre.

“Today is not really a happy day for the European Union and I think for many people worldwide,” said German Social Democrat Bernd Lange, the chair of the European Parliament’s trade committee.

Lange was leading a delegation to Ottawa to study the effects of the massive Canada-EU free trade deal, which is expected to be ratified early next year.

Artis Pabriks, the EU’s rapporteur on the deal, said while good intelligence and co-operation between allies is essential for preventing terrorist attacks, Europe, Canada and the United States need to do more on that front.

“Violence and naked power should not be, and will not be the thing which will determine how we will live,” added Pabriks, also Latvia’s former defence minister.

The Islamic State group claimed responsibility for the attacks in Brussels, saying its extremists opened fire in the airport and “several of them” detonated suicide belts.

Global Affairs said Tuesday that while there was no nationwide advisory in effect for Belgium, Canadians should exercise a “high degree of caution due to the current elevated threat of terrorism.”

Air Canada also warned that flights to the Belgian city may be cancelled and security was beefed up at one of Toronto’s main transportation hubs. At least one Twitter post indicated the cancellation of a Canadian school trip to the European capital.

More than 200 flights to Brussels were diverted or cancelled, according to flight tracking service Flightradar24.

The Paris airport authority said security was tightened at all local airports soon after the Brussels explosions on Tuesday morning. Airports in London, Prague, Amsterdam, Vienna, and many others, also saw increased security.

The explosions came just days after the main suspect in the deadly Nov. 13 Paris attacks was arrested Friday in the city.

After his arrest, 26-year-old Salah Abdeslam told authorities he had created a new network and was planning new attacks.

Belgium has raised its terror alert to its highest level, diverting arriving planes and trains and ordering people to stay where they were.

Airports across Europe immediately tightened security as a fleet of emergency vehicles roared in to handle the carnage at the Brussels airport.