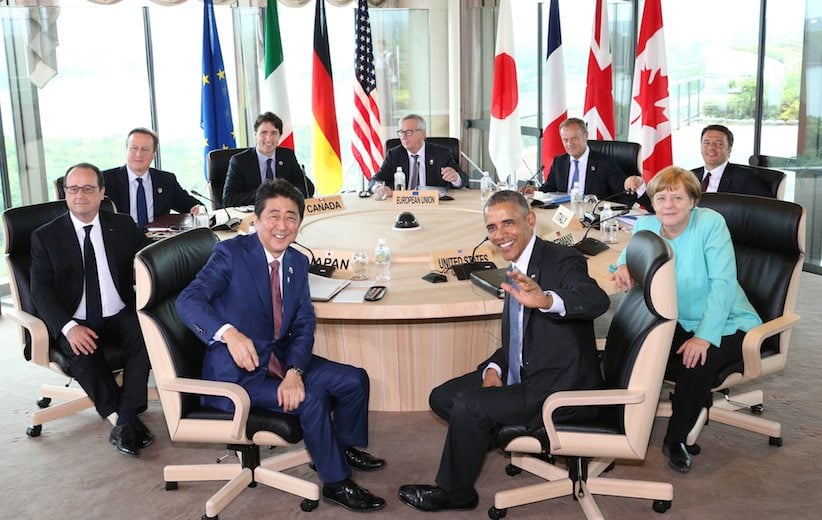 SHIMA, Japan – Justin Trudeau says he’s encouraged by the pledges made Friday by his fellow Group of Seven leaders in Japan, on both their renewed vow to stop paying ransoms for hostages and their approach to boosting the global economy.

However, the ransom promise closely resembled a G7 pledge from three years ago, something experts say member countries didn’t live up to.

And on lifting the world’s feeble economic growth, the G7 essentially pledged to continue with their own individual strategies.

Heading into the summit, Trudeau had urged some of his more fiscally prudent counterparts to invest more government cash to generate growth.

Still, while speaking to reporters in Shima, Japan, the prime minister said he felt the group moved forward significantly on a number of files during his first G7 summit.

On the economy, he said there was a broad understanding that monetary and fiscal policy, as well as structural reforms, are all important for enhancing global growth.

Each country will map out its own path, Trudeau noted.

“Understanding that we do need to create a broad suite of measures to offset the challenges faced by low global growth is something that we are very much in agreement on,” Trudeau said.

“The concerted approach is to use the levers available to each of our economies in as fulsome a way as possible to create growth.”

The leaders vowed to use a more-balanced response to lift growth and agreed that monetary policy – such as benchmark interest rates – cannot alone create stronger, sustainable growth.

The 32-page declaration did commit to fight protectionism and called the potential United Kingdom exit from the European Union a serious risk to growth – two positions Trudeau had publicly supported in recent days.

Overall, the document touches on a range of subjects, including refugees, health, terrorism, security, climate, trade and the global economy.

The content of the G7 stance against paying ransoms did not appear to go much further than the leaders’ position on the same issue at a summit three years ago.

In the document, the leaders said they “unequivocally reiterate” their resolve not to pay ransoms to terrorists.

“It doesn’t seem like a firm commitment does it?” said David Welch, CIGI chair of global security at the Balsillie School of International Affairs.

“This was a Canadian push, that much is clear. Whether the Europeans, in particular, follow through will be interesting. Europe has a long tradition of paying ransom to solve hostage situations.”

But Trudeau, who drove the issue of ransoms, was satisfied with the agreement.

He said he felt that public opinion had shifted on the issue and more people around the world now understand that such payments are lucrative source of financing for terrorists.

“I expressed my firm resolve and the clear resolve of Canadians to prevent the Canadian flag from becoming a target when worn on a backpack around the world,” he said.

Trudeau said the leaders had a very strong conversation Thursday night around the G7 table about Canada’s situation in the Philippines. It has made the issue of ransoms of important for Trudeau.

Last month, Canadian hostage John Ridsdel was beheaded by Abu Sayyaf militants in the Philippines who had demanded a large sum of money in exchange for his release.

Another Canadian, Robert Hall, was kidnapped by the same group and is still being held hostage in the Asian country.

Earlier Friday, a Trudeau spokesman said he was pleased to find specific items on health and quality infrastructure mentioned in the closing G7 statement.

Cameron Ahmad said Canada was encouraged that the communique highlighted an upcoming Global Fund conference in Montreal to raise cash to fight AIDS, tuberculosis and malaria.

Global Fund raises an estimated US$4 billion every year as the world’s main funding body in the fight to prevent and treat those diseases.

“We are committed to ending AIDS, tuberculosis and malaria, working in partnership with the Global Fund,” the G7 statement said.

It also called on new and traditional donors to support a replenishment of the fund.